Holiday spirit with a dash of giving back 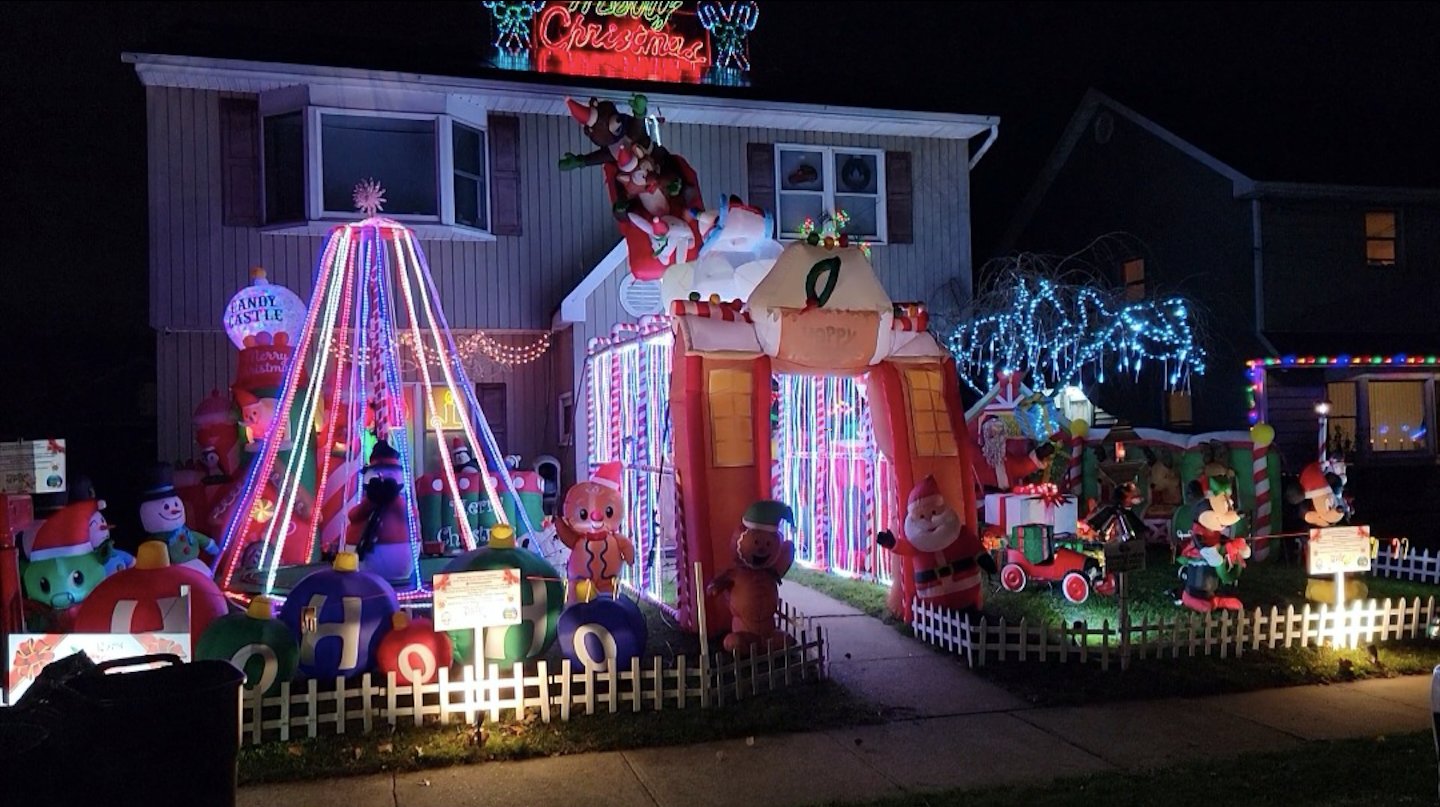 The house on Woodland Avenue has 16 or so blow-ups and thousands of lights.
Courtesy Ron Vecchio
By Mallory Wilson

Ron Vecchio, 50,  never thought he would decorate his house much for Christmas. But over the course of about 20 years, the decorations just multiplied, he said. Some old, some new, some bought and some created, the decor comes in all shapes and sizes. Now, his house at 2505 Woodland Ave., in Wantagh has become a crowd favorite.

“The kids love it,” Vecchio, 50, said. “It’s something that they’re always going to remember.”

But the effort doesn’t just stop there – he’s made sure to give back to the community through his holiday fun. For the past five or so years, he has collected money for the Wantagh Special Education Parent-Teachers Association.

The Wantagh resident since 1999 has about 16 inflatable decorations, a faux snow machine, a Santa projector and thousands of lights. His son Aidan, 17, usually helps him decorate the outside, while his wife Christina and daughter Hayley, 20, decorate inside of the house.

It’s hard to even count the total number of extension cords that are outside the home, Vecchio said.

His son Grayson, 5, who has down syndrome and Autism, is the reason why the family chose to donate to Wantagh SETPA. Grayson is in the special education program at Mandalay Elementary School.

“Ever since we had Grayson, we’ve been donating for him,” Vecchio said. “We donate to whatever school he is in at the time.”

Wantagh SEPTA representatives were overjoyed that the family chose to donate to them.

“We’re very grateful and pleasantly surprised that they picked us as the recipient,” Debbie Derupo, the responding secretary for SEPTA said. “We hope we can use the money to help more in the community.”

Any money donated to SEPTA goes to scholarships for students who have been in special education programs or students who have helped those in that program. Donations could also help fund teacher grants, family activities, or pay for Wantagh SEPTA meeting guest speakers.

Vecchio said he loves all of his decorations equally, but he might be partial to his snow dispenser machine, or the Santa Claus in the house’s upstairs window. Most of his decor is from online stores or created from pieces he’s found.

“It’s amazing what you can do with PVC and red duc tape,” he said. “I’ve made candy canes with them and I’ve made lanterns.”

The day after Thanksgiving, Vecchio begins to convert his house. It takes him about a week to put up all the decorations. He begins the dismantling process on Jan. 1.

“My kids ask practically every night if they can go see Santa in the window,” Dawn Cavallo, a Wantagh neighbor, said. “They love that and the snow.”

Cavallo and her children Noelle, 4 and Abrielle, 2, live down the street and have stopped by the home every season for about three years. “I love seeing the decorations,” Cavallo said. “We decorate but not nearly as much as he does.”

Vecchio said the neighbors have always been positive about the display; many of them look forward to it. As Christmas nears, traffic tends to accumulate near the house, he said.

Next year, Vecchio said he wants to expand his decorating efforts even more. The plan is to take over the driveway and create a little spot for Santa to stop by.