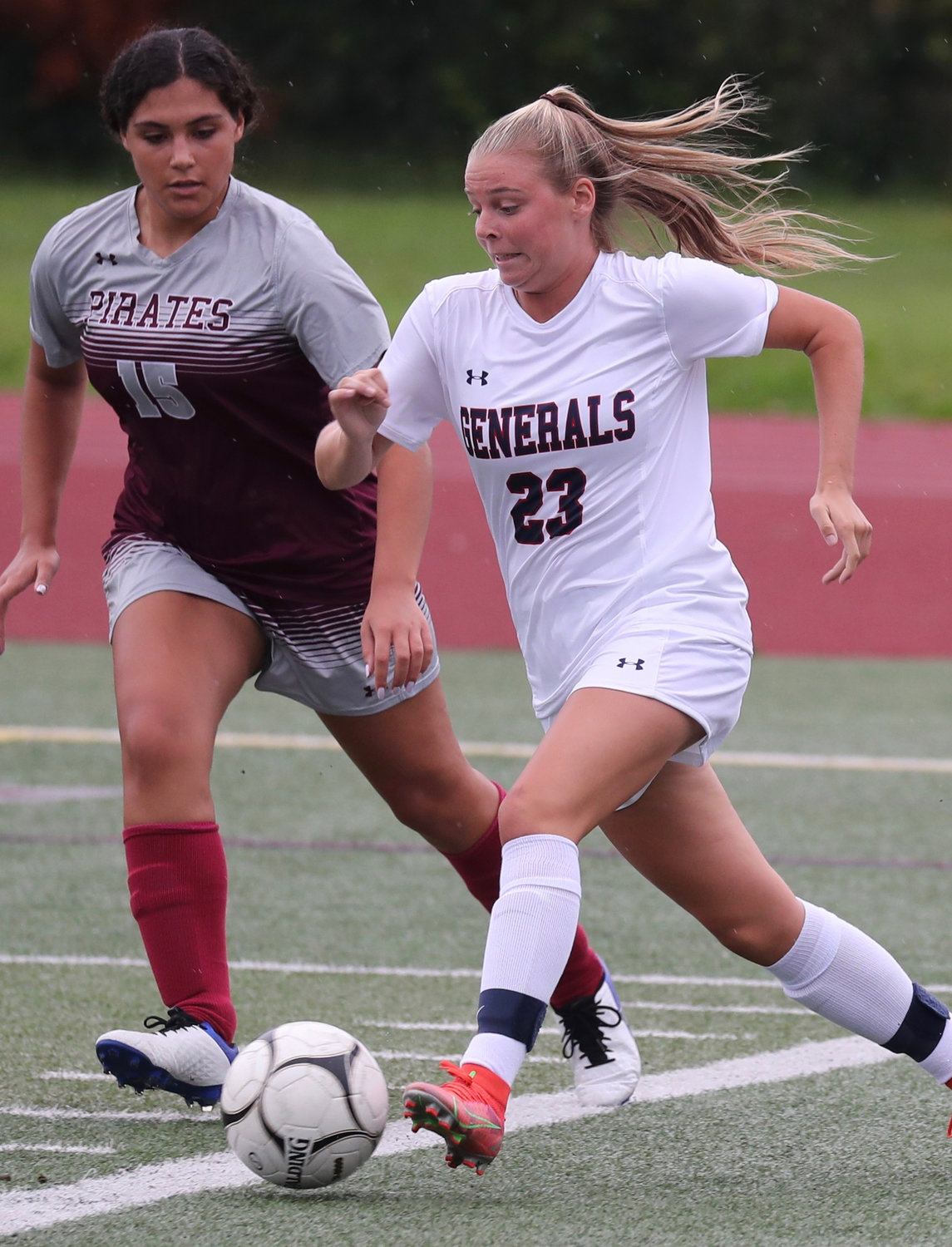 MacArthur's Hailey Hnis, right, led the way to the Conference A1 title by scoring 17 goals, including four in a victory over Wantagh.
Jeff Wilson/Herald
By Andrew Coen

MacArthur girls’ soccer coach Jamie San Filippo ran the Suffolk County Marathon last Sunday in the midst of his team’s playoff drive he hopes has its own extended run.
San Filippo ran a personal best time in the 26.2-mile race one day after MacArthur defeated Floral Park 4-1 to advance to the Nassau Class A quarterfinals on Wednesday against Calhoun after press time. The sixth-year coach and his veteran-laden team that earned the top-seed after an 8-4 season in Conference A1 are driven to capture a county title after falling just short of their goal last season.
“This group of girls has really come together and chased a lot of adversity,” San Filippo said. “They have a team goal in mind that they want to achieve and they are working toward it by spending a lot of time together on and off the field.”
The Floral Park win last Saturday featured three different goal scorers in Kaitlyn Tung, Fiona Kilian, Summer Looney and Angelina Sayago. Hailey Hnis, Meghan Wetzel and Kailee Coppola each registered assists.
The Generals marched into the postseason on a high note with a 1-0 home win against Garden City on Oct. 15 in which Summer Looney tallied the winning goal in the 51st minute off an assist from Kaitlyn Tung. The victory coupled with South Side’s 0-0 tie with Manhasset earned MacArthur the conference title and number one seed.


The offense has been sparked largely by Hnis, a senior forward who has struck for 17 goals. Kilian, a senior midfielder and Xavier commit, has anchored the midfield along with freshman Bella Calabro.
MacArthur posted seven shutouts in the regular season with a defense that has endured changing lineups through multiple injuries including a season-ending ACL tear to Albany-bound senior Madison Hnis. Junior Ava Anguilli, who missed two and half weeks of the season due to injury, and sophomore Meghan Wetzel are also big centerpieces of the backline along with freshman Caitlin Barry.
Junior goalkeeper Lexie Thompson, who as a sophomore only surrendered one goal in the regular season, has continued her strong play this fall, which included a 12-save performance in a 2-0 victory at Garden City on Sept. 28. Backup goalie Jenna Nasello has also stepped in when needed and recorded a shutout in MacArthur’s 6-0 home triumph against Valley Stream South on Oct. 4.
A win against Calhoun would move MacArthur into the semifinals this Saturday evening at Cold Spring Harbor against the winner of Wednesday’s Plainedge-Manhasset quarterfinal game.
Six months removed from falling in overtime to South Side in the county finals, The Generals could be on a collision course to meet the Cyclones on the championship stage again. South Side swept the season series with MacArthur by scores of 2-0 and 3-2.
“That is what we want is a chance to kind of redeem ourselves from not only last season’s county final but also taking two defeats from them on the year,” San Filippo said. “We would not mind seeing them again.”