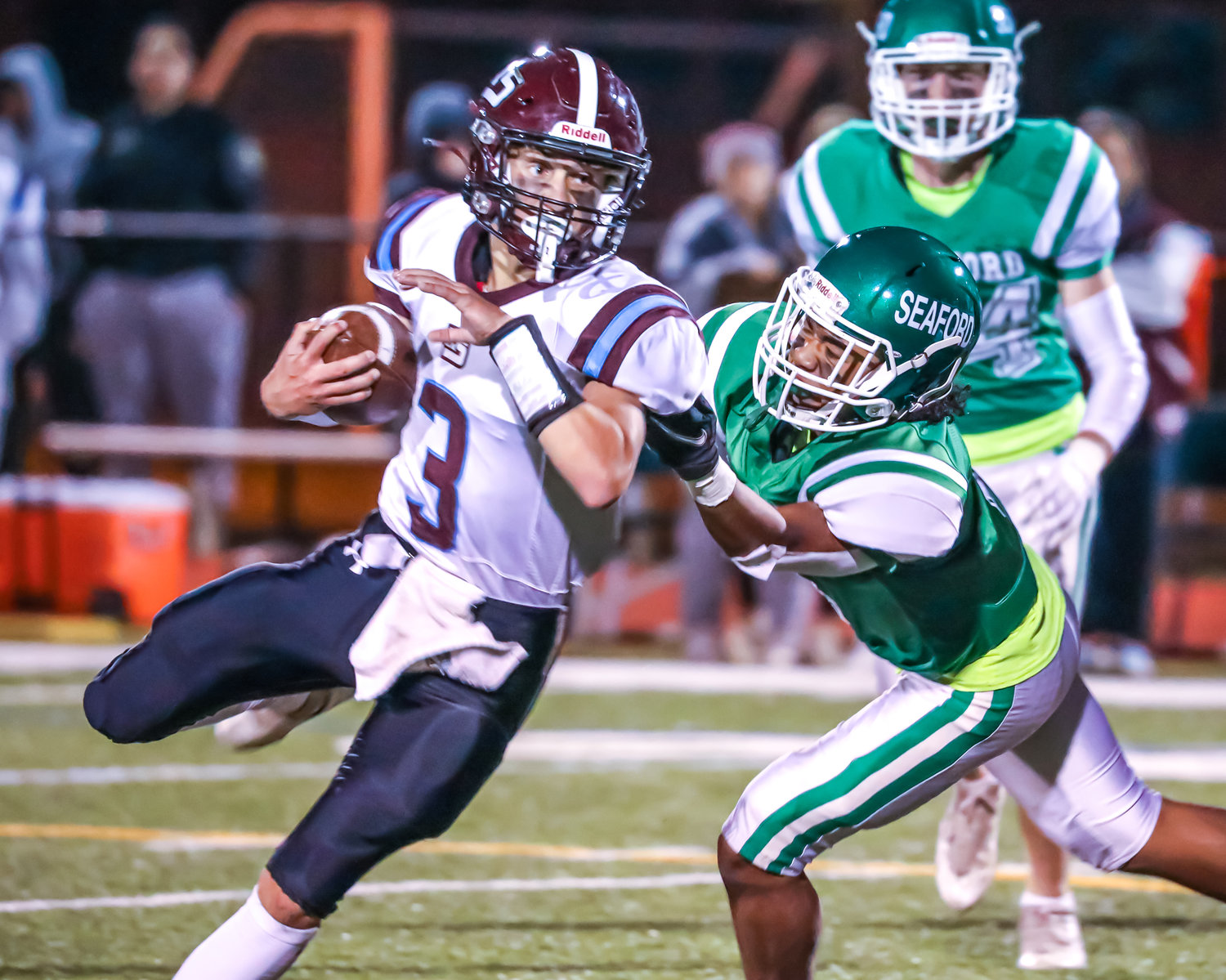 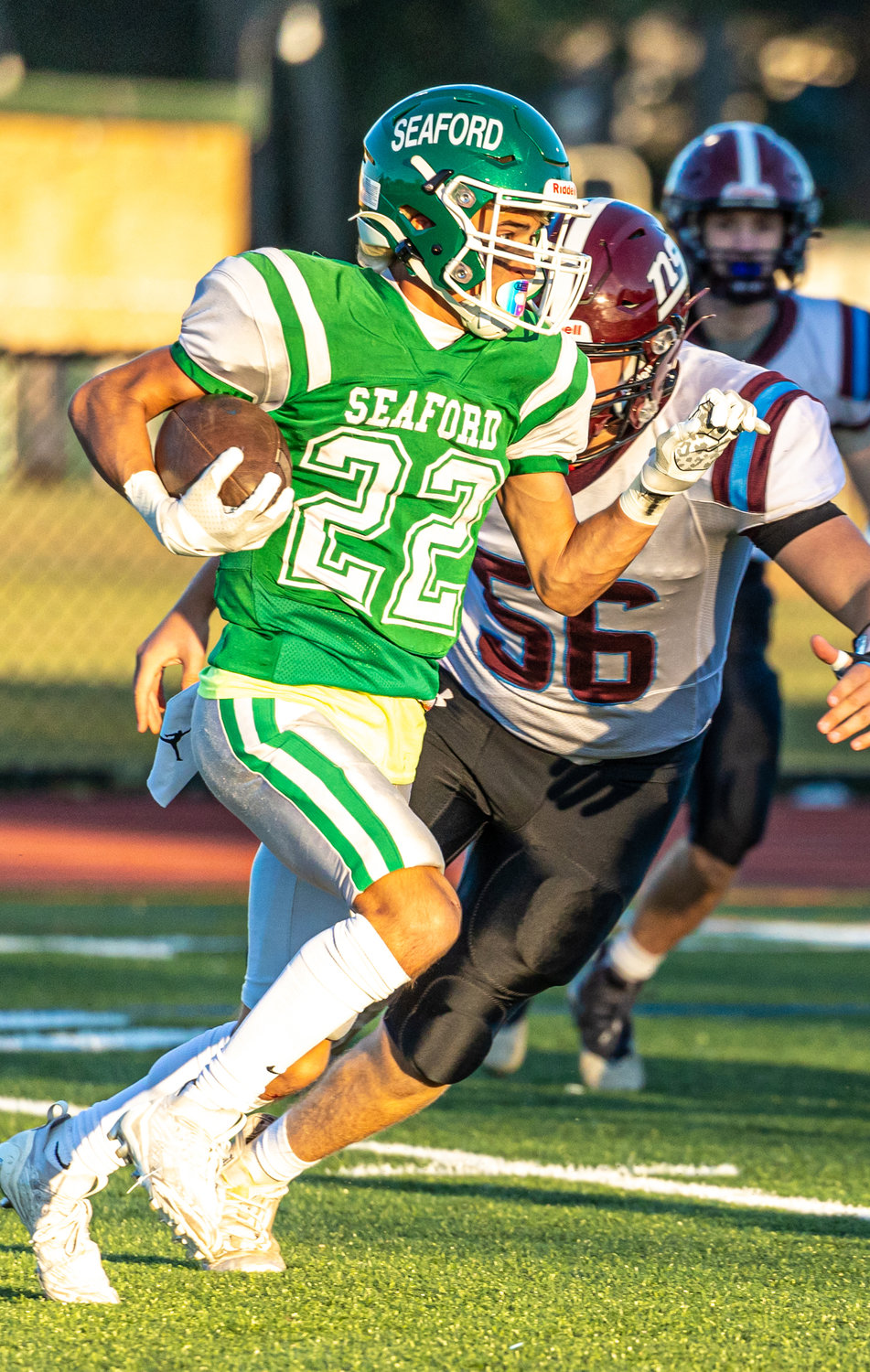 But last Friday night’s was one of them. Seaford rallied in the second half to take out North Shore early last season – a 27-21 loss ingrained in its psyche.

“This year we want to separate ourselves from the team last year,’’ North Shore running back Nick Livoti said. “It’s something we couldn’t accomplish last year, beating Seaford.’’

“They did jumping jacks on our logo and were singing “Hey, Hey goodbye,,’’ Livotj said. “We never got that out of our heads.’’

Seaford head coach Michael Corcoran shrugged off the 2021 postgame antics, feeling it was much ado about nothing.  “They lost to us last year,’’ Corcoran said. “I’m sure they wanted to beat us. And we’ll want to beat them next time. It’s become a bit of a rivalry.’’

Livoti’s first score was the turning point.  It came late in the first half with North Shore clinging to a 7-0 lead. Seaford was driving into Vikings’ territory for the tying score as the large Seaford crowd got loud on a pivotal 4th-and-4.

Defensive back, Peter Liotta, also the quarterback, quieted the throng. He intercepted the pass and sprinted it to the Seaford 20. After an illegal motion penalty set up 1st-and-15, Livoti made the play of the game – a jet sweep to the left. Bruising running back Nick La Rosa delivered a punishing upfield block and Livoti raced in with 3:57 left in the half for a 14-0 lead.

Essentially, the winds were out of Seaford Vikings’ sails.

“It felt amazing,’’ said Livoti, who racked up 80 yards on 10 carries. “Against Malverne (a 16-0 victory on Sept. 17), we weren’t able to capitalize on their mistakes and this week we did. That was the emphasis in practice.’’

Liotta had a fumble recovery to cap his defensive day but he also ran from the quarterback position for 134 yards on 14 carries.

Corcoran can only lament what could have been if his club played a perfect game. “They were the clearly better team,’’ he said. “You can’t turn it over twice and expect to beat North Shore. They’re well-coached. I’m happy with effort but we made too many mistakes. Their three runners are really good.’’

Indeed, the trifecta of LaRosa (17 rushes, 93 yards), fullback Ryan Freund and Livoti are going to carry North Shore, which faces Island Trees next.

But North Shore’s defense did a job on Seaford running back Aidan Calvacca, who had a relatively quiet day of 8 carries for 44 yards. He tore up North Shore in 2021 but head coach Dan Agovino game-planned to make sure they contained him to the inside.

Seaford got its lone score in the final minutes when Sean Costello hit Calvacca on a 15-yard touchdown pass.

“We talked about the fact last year it was definitely a mark on the record because we were winning that game,’’ Agovino said. “We hated losing a lead but this was a business trip first game on the road.”