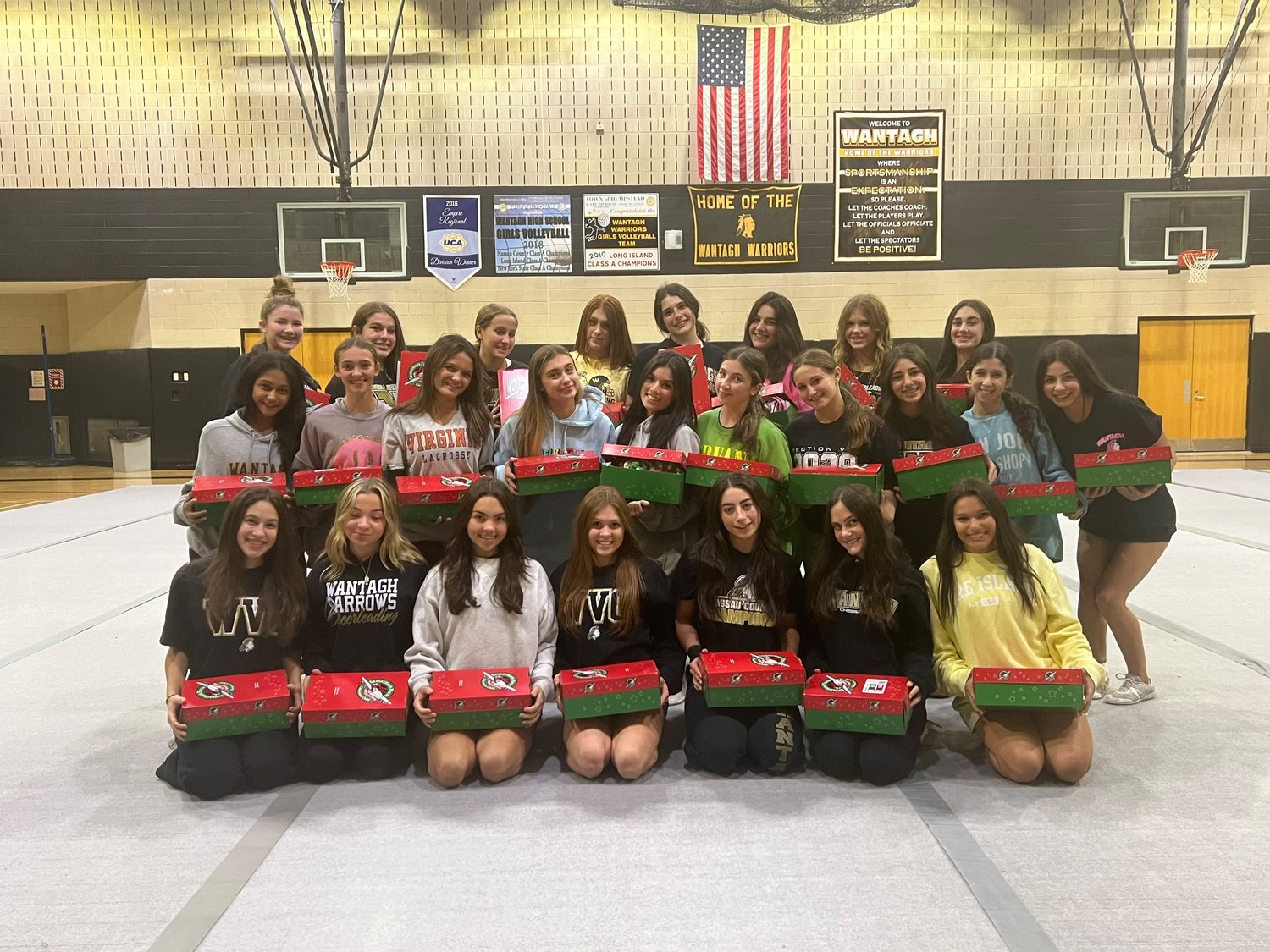 It’s something that we can do to give back to the community.”
Kayla Spisto sophomore, Wantagh High School
By Michael Malaszczyk

Kayla Spisto, a sophomore at Wantagh High School, is doing her part to spread some holiday cheer to children of all ages.

Kayla, who is on the high school’s cheerleading team, took the initiative in the team’s annual toy drive this year. Every year, the Wantagh cheer team works with Samaritan’s Purse’s Operation Christmas Child to fill up shoeboxes with toys, as well as essential items, to be shipped to children all around the world. The cheer team usually produces between 12 and 18 boxes.

Samaritan’s Purse is a Christian humanitarian aid organization founded in 1970 and based in North Carolina. Operation Christmas Child started in 1990 and has since donated millions of toy-filled shoeboxes to children.

“Usually each cheerleader just gets boxes,” Kayla said. “But this year, my grandma, who does it in Florida, had a bunch of extra boxes, and she sent them to us. I distributed it to the cheer team for the middle school and high school.”

Samaritan’s Purse usually works through churches, and Kayla had hooked up with the organization through her church prior to working with the cheer team.

“They give us a list of things to include,” Rose Spisto, Kayla’s mother, said. “Mostly they want toys, but you’re advised to put things in like toothbrushes and hair brushes as well — shampoos, too. These are the things that we tend to take for granted, but they’re part of daily living and are things that people need.”

Rose Spisto has always been involved with these kinds of drives at her church, and her charitable spirit has spread to her daughter. Kayla noticed that no one was really too enthusiastic about the cheer team’s drive and felt that it could be bigger, so she took the initiative on it.

“I asked around the entire school,” Kayla said. “Some people took five shoeboxes each. And then they’d get family members or friends involved. The holiday joy really spreads.”

A large part of the sophomore’s motivation is being grateful growing up in Wantagh.

“Every kid deserves that feeling on Christmas morning,” Kayla added. “That feeling of seeing presents under the tree.”

Wantagh’s contribution to Operation Christmas Child topped off at around 100 boxes this year, which is way more than the usual amount raised by the cheer team alone.

Both Kayla and her mother said they hope that they have made this drive something bigger for Wantagh schools, and that it continues next year.

“Maybe this is only the beginning,” Rose Spisto said. “Maybe next year we’ll be donating 200 boxes.”

Kayla is no stranger to performing charity work. Earlier this year, along with fellow student Jayla George, she led a drive to give crayons to students in hospitals. This project was in partnership with the Crayon Initiative, and ap-proved by Wantagh High School Principal Paul Guzzone. Together they collected donated crayons from Wantagh’s elementary schools, which were melted down, remanufactured by the Crayon Initiative, and sent to more than 240 children’s hospitals.

“It makes us feel good to help in some way,” Kayla said. “It’s something that we can do to give back to the community.”