Community raises over $1,700 for charity 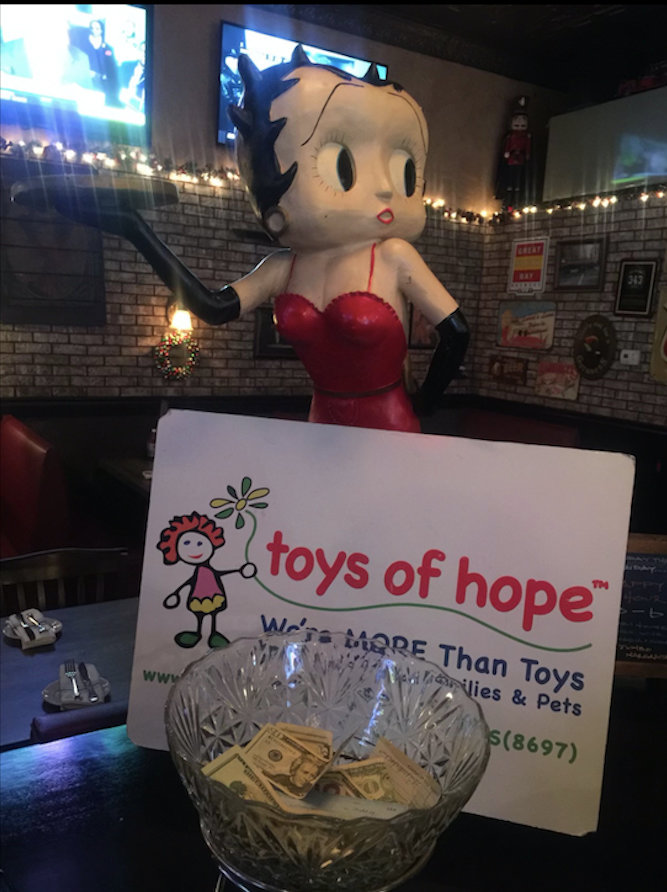 The Seaford community raised over $1,700 for American Giving Project/Toys of Hope, a nonprofit that helps Long Island families in need.
Courtesy Melissa Doktofksy

It has been over 20 years since Seaford resident Maureen Breidenbach decided to use her eatery to give back: Every year, residents stopped by the now-shuttered Caps Restaurant, on Naomi Street, for a free benefit event for the charity American Giving Project/Toys of Hope.

Now the holiday gathering has been passed down to another generation of the Breidenbach family: It takes place every year at Bayview Tavern, a local restaurant owned by Maureen’s daughter, Amy Breidenbach.

At the latest event, on Dec. 21, Bayview raised over $1,700 for American Giving Project/Toys of Hope. Some people who couldn’t attend the festivities donated toys directly to Melissa Doktofsky, of Huntington, who founded the nonprofit in 1994, at age 25.

The charity, based in Huntington, collects money, food, toys, clothes, and school and pet supplies for Long Island residents in need.

Caps, which opened in 1984, held its first holiday benefit for the charity in 1996. It was a recurring event until 2012, when Hurricane Sandy hit Seaford and Caps was shuttered due to damage. Luckily, Amy was able to continue the event at Bayview Tavern, just down the street.

The annual gala for Doktofsky’s organization is free, and food is supplied by the restaurant. Attendees are asked to bring monetary donations or toys. The event was not held in 2020 due to the coronavirus pandemic.

Maureen said that all those years ago, she had always wanted to give back during the holidays. While considering local organizations to help, she saw a story about Doktofsky’s charity in Newsday. “I was struck that she was such a young girl and was taking on such a big job,” Maureen said. “Her inspiration for doing what she wanted to do struck me. She has so much heart and dedication. The world needs more like her.”

When the Breidenbachs met Doktofsky in 1996, American Giving Project/Toys of Hope was still in its early years. She was keeping the toys she collected in her garage.

“We thought it was amazing,” Amy said. “My mom was really touched by her effort.”

Doktofsky said she was so excited when Maureen contacted her. They met and instantly bonded, she said. “The first event was amazing,” Doktofsky said. “There was food, music and a table of toys. We stayed and spoke for hours after the event ended.”

Doktofsky said that the Breidenbach family typically collects over 200 toys a year for her organization, and raises over $1,000. The charity helped over 30,000 people this holiday season.

“To have these families who support my life’s work is such an honor, and I feel privileged,” Doktofsky said. “They’ve become like my family, and it’s amazing that they support me.”

Doktofsky grew close to the Breidenbach family after they started hosting events for her nonprofit.

Rather than just collect toys for Doktofsky, Maureen said she wanted to fully support her organization. “I was really interested in us bringing in the gifts for her and her distributing them,” Maureen said. “I could’ve chosen another charity, but I really loved Doktofsky’s drive.”

Even though Bayview Tavern isn’t large, Amy said, they try their best to do whatever they can for American Giving Project/Toys of Hope. “There’s not a lot of us, but what we have is good,” she said. “Everyone does what they can for her.”

Maureen said she’s not surprised that American Giving Project/ Toys of Hope and the restaurants have kept the tradition going for so long. For her, it’s all thanks to Doktofsky. “Seeing the children happy sustains her, and that feeling spreads throughout everyone who works with her,” Maureen said. “She has so much fortitude and enthusiasm.”