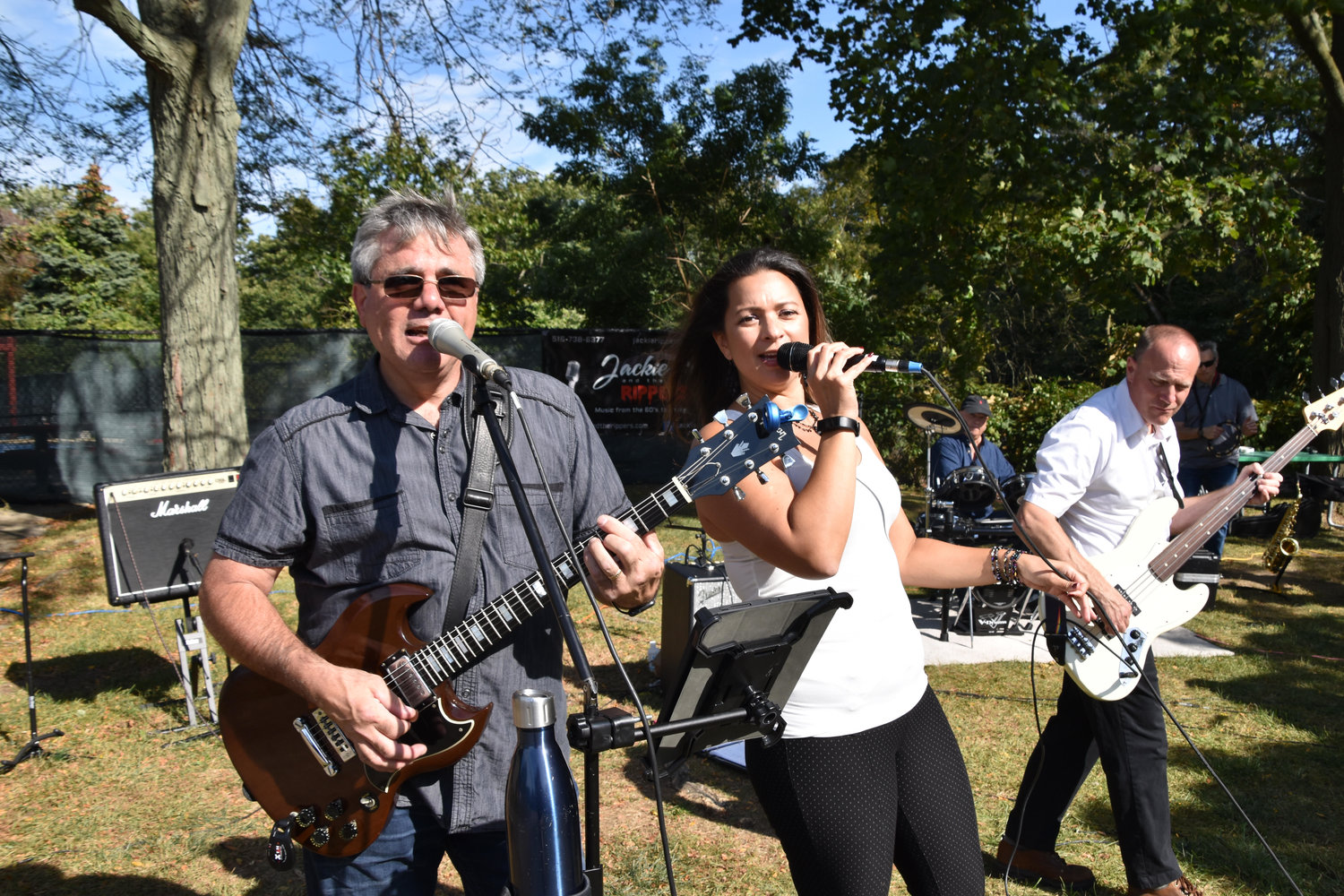 The famous lyrics of the Beatles’ 1963 hit “All My Loving,” sung by Seaford resident Jackie Vadala, echoed across Forest Hills Center Community Park in Wantagh last Saturday at the second performance ever by cover band Jackie and the Rippers.

The South Shore-based rock group is the joint effort of vocalist Vadala and her uncle, drummer Charlie Steinert, of Massapequa. For about four years, the pair have been working to find the right members to create a cohesive group.

Now the band is ready to rock the local music scene, performing covers of songs from the 1960s through today. Playing rock ’n’ roll, rockabilly and some country tracks, Jackie and Rippers made their debut at the Family Street Festival at the Bellmore Long Island Rail Road Station last month.

“We’ve tried to fine-tune it and get the right fit,” Vadala said. “Over the last couple of months, we’ve really perfected the group. This is the one.”

The band’s name is a reference to the 1990s sitcom “Full House,” in which Jesse Katsopolis — played by the star John Stamos — plays in a band called Jesse and the Rippers.

Chris Steinert, of Massapequa, was on drums, above, at a fall festival in Wantagh last Saturday.

“I was chatting with my friend and I told him I’m in a band with my family,” Vadala recalled. “He goes, ‘What are you guys, Jackie and the Rippers?’ And I thought, You know what? We sure are!”

Some of the band members, including lead guitarist Donald Melchione, of Stewart Manor, are longtime performers and fans of oldies music. Melchione said he has been performing as a guitarist since the 1970s. His stage career was put on pause in the ’80s, when he was married and had children, but he took up his passion once again roughly a decade ago.

Asked what brought that about, Melchione said, “I always told my wife that when my kids got older, I’d get back into it again. So it’s reached a point where my three kids, they were old enough. My wife encouraged it, she said, ‘Go for it,’ so I put myself on Craigslist and started auditioning.”

Melchione previously played with a Long Island cover band called the Overlooks for about six years, but when the pandemic hit, the group broke up. In the summer of 2020, he once again went on Craigslist, and started auditioning. Toward the end of the summer, Steinert gave him a call.

‘He thought I’d be a good fit,” Melchione recalled. “I came down, I heard Jackie singing and I thought, This is where I want to be.”

Bass guitarist Mark Nygren, of Northport, who joined the band in May, said there have been some crossover cover songs that he’s played with other local groups. “Some of this stuff I know but other stuff I’ve never played in my life,” he said “… This is more of a straight classic rock band the ones I’ve been in, on and off, over the past 30 years.”

For Steinert, picking up his drumsticks once again after a long hiatus was a must-do on his bucket list, he said. “I took up my old dream that I was never able to pursue, and here we are,” he said. Once he purchased new equipment, he built a studio in his Massapequa home. His wife, Chris, also plays drums in the band.

Vadala, who has been singing since she was a child, said she got her start after belting out the song “Thank You For Being A Friend,” by Andrew Gold, the theme song to “Golden Girls,” as a girl. She said she was grateful for the opportunity to play with talented musicians.

‘We hope to be able to do upcoming fall festivals while it’s still nice out,” Vadala said. “And we’ll be playing indoor venues, but we really want to take advantage of what we can. We’re so lucky to be able to get our foot in the door this summer.”

Though outdoor shows may temporarily end in the colder months, Steinert said the band has a plan: They’ll head into the studio. “We’ll work on harmonies, go over the shows that we’ve done and make corrections, and record some videos for the winter season,” he said. And the group may write some original music.

“This band is all about family,” Steinert said. “We’re a giving band: We want to help anybody we can, through charities and fundraisers. We’re there for the people, and that’s what we’re all about.”