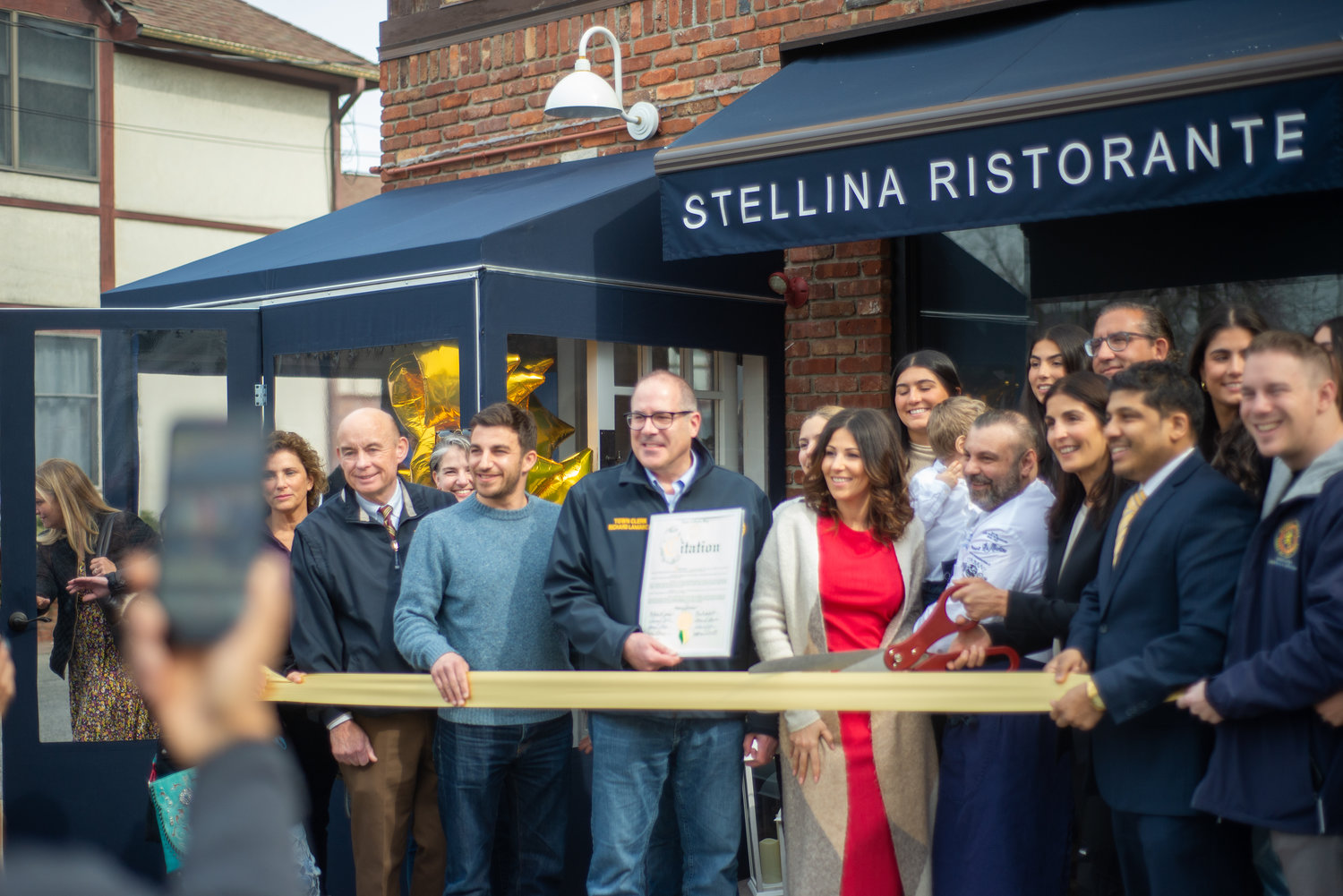 The chamber and town welcomed Stellina, a new Italian restaurant in the hamlet.
Steven Keehner
By Steven Keehner

When Adriana and Tom Milana moved to Oyster Bay in March 2020, they watched as businesses around them closed their doors due to Covid-19. When Osteria Leana, one of their favorite local restaurants, closed in 2021, they saw an opportunity. They reached out to their friend, Fabrizio Facchini. A chef, he has also been the couple’s business partner at their other venture, Cardinali Bakery, in Oyster Bay.

“My dad showed him the space and they loved it,” Sabrina Milana, the couple’s daughter, said. “And then this kind of became their project together.”

Following a year of renovation, the Oyster Bay-East Norwich Chamber of Commerce welcomed Stellina Ristorante during their ribbon cutting on Mar. 5.

The restaurant’s owners invited people to come and sample complimentary food and beverages. And come the did, packing the restaurant’s close quarters, which seats 40 people.

“I talked to a few people and the food was just outrageous,” Steven Sprachman, of Hicksville, said. “That’s the most important part.”

Stellina, which means “little star restaurant,” the eatery guarantees a taste of Italy. “I don’t know all the places here in Long Island,” said Facchini, an Italian-born chef, restaurateur, television personality and philanthropist. “But I don’t think that what we are doing here [compares] to the other restaurants around that are more Italian-American.”

Town of Oyster Bay Clerk Richard LaMarca praised the new restaurant. “Stellina Ristorante is a shining little star in downtown Oyster Bay,” he said, “and offers an atmosphere compatible to dining in Italy.”

Sabrina, who is also Stellina’s operations manager, said their goal is authenticity. This includes offering a variety of spuntini, pasta, pizzas and other seasonal delicacies.

“Our chef is right straight from Italy and his cooking is excellent,” she said. “And I just think this restaurant is supposed to bring a little slice of Italy to Oyster Bay.”

Alongside Stellina, the Milana family has run Stella Ristorante, another Italian eatery in Floral Park, since 1960. It’s not the family’s first collaboration with Facchini. Last year, the Milanas became partners with him in Cardinali Bakery, another Oyster Bay-based business.

Facchini said there was no pressure behind the restaurant’s launch. “I’m pretty used to all that kind of ceremony,” he said. “I get awarded like three or four times by the Italian American Chamber in New York, so I’m not nervous at all.”

“You’ve invested in our community and all we need to say is thank you and continue to invest in you,” Chetram said. “Let’s make sure we patronize our local businesses and take care of those who invest in us. We know this is going to be successful for years to come.”

Imbroto joked about the buzz around the new establishment. “I’m a regular customer of Cardinali’s and I would love to be a customer here — if I could get a reservation,” he said.

With a mostly unmasked crowd, Chetram later said that while caution is still required, being able to see everyone’s face made the event more enjoyable. Openings like Stellina’s, he said, are indications that the community has progressed since the pandemic’s worst days.

“People took a hard hit during these times, and we did everything we can to keep them in business. But now, people are taking chances like this family and Fabrizio,” Chetram said. “We have four ribbon cuttings today. We had five a few weeks ago and three before that. So, it’s a great sign for Oyster Bay and East Norwich.”