A tribute: ‘He was hip-hop’ 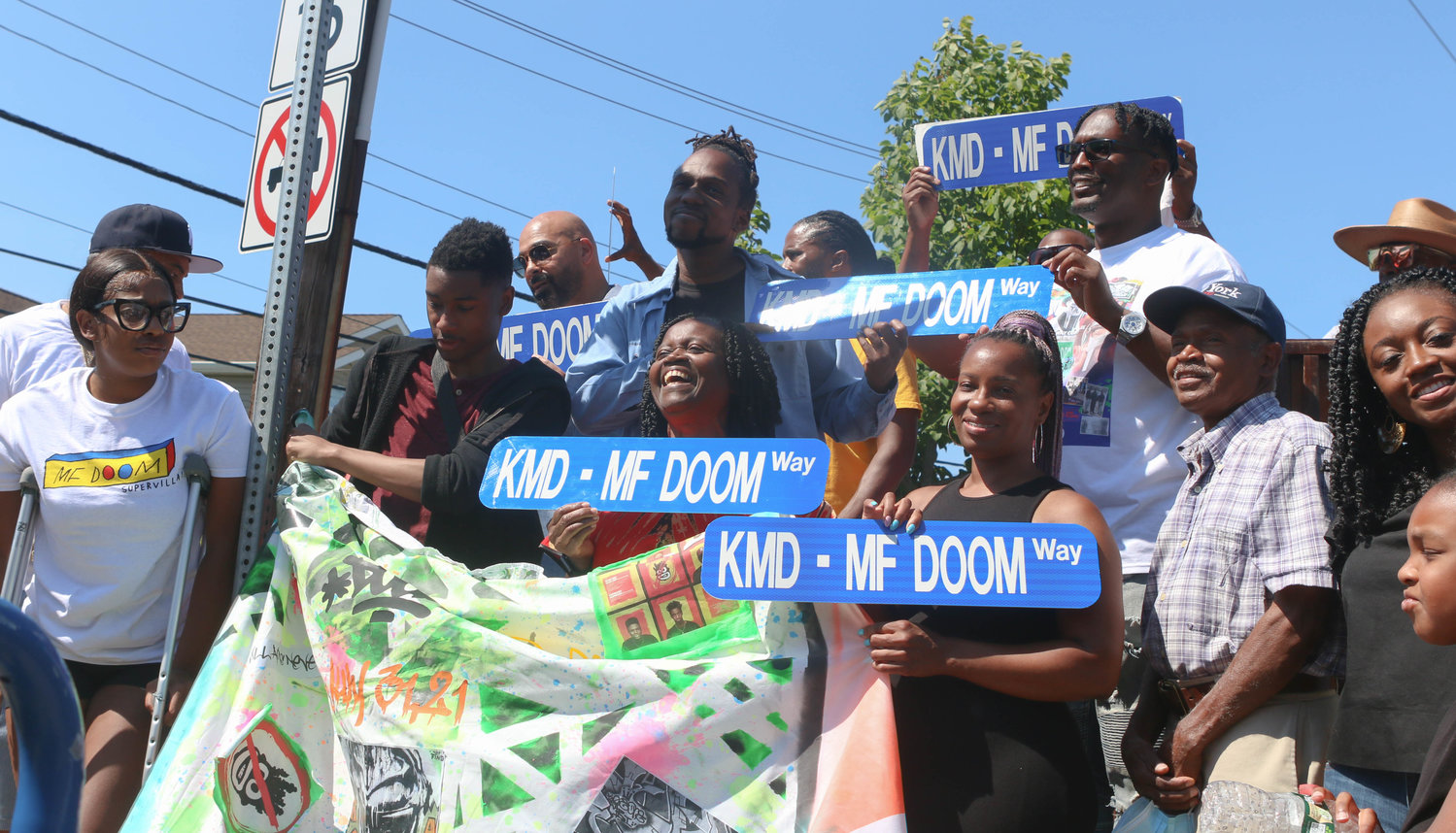 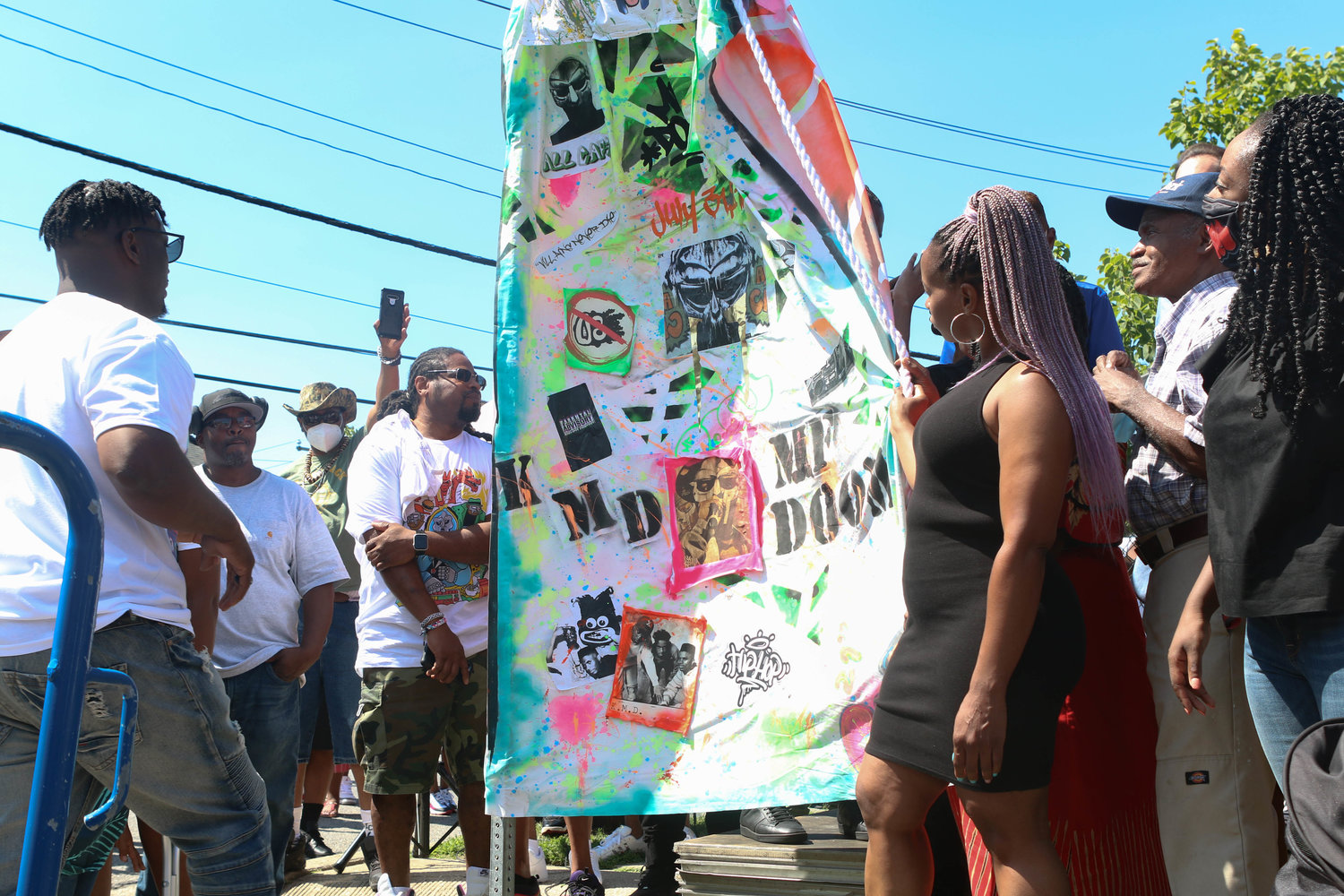 Relatives and friends of the rapper displayed a sheet of drawings of him wearing his masks.
Previous Next
By James Bernstein

Some three decades ago, the quiet, young London-born boy would sit in his room in a small wooden house on Hudson Street in Long Beach, studying, reading, listening to music and dreaming: He would one day become a famous musician.

Daniel Dumile came to Long Beach from England as a fifth-grader, and he and his younger brother decided that they would leave the hardscrabble section of Long Beach, and the whole world would hear their message.

Years later, Dumile would adopt the stage moniker M.F. Doom, or just Doom, and his rap music would transcend race and musical tastes. Even those who never listened to rap came, over time, to listen.

Dumile became one of Long Beach’s best-known entertainers — right along with Billy Crystal — and one of the country’s most influential rappers. He died last October, at age 49.

Last Saturday, dozens of fans, friends and family members gathered for a ceremony to dedicate East Hudson Street, at Riverside Boulevard, to the rapper, who was known by the trademark mask he always wore on stage, and the lyrics that came from his heart.

“His music was about individualism,” said Frei Speech, a friend and music producer from Brooklyn. “His message was about being authentic. It was about not having any limits for yourself.”

Dumile’s wife, Jasmine, announced on social media last Dec. 31 that he had died on October 31. The cause was not announced.

But it was his life that was celebrated on a warm Saturday afternoon.

Patrick Graham, a former executive director of the Martin Luther King Center in Long Beach, said he had led a petition drive eight months ago to urge the City Council to dedicate the street to Dumile, who was referred to throughout the hour-long ceremony as Doom, or M.F. Doom.

“This journey has not been about a petition,” Graham told the crowd, to applause. “It is not about a letter to the City Council. It is about a life.”

Dumile’s life was complex, and not always easy. He moved to Long Beach with his family — his mother was an artist — when he was 10. He studied music, and practiced in his room, and outside with his friends, for hours on end.

“We all grew up in this area together,” said Derrick White, a childhood friend who now lives in Queens but came for the dedication. “He was very ambitious, quiet. He stayed to himself a lot.”

His professional career began in 1988, as a member of KMD. He performed under the name Zev Love X. But his life crumbled when his brother, DJ Subroc, died in 1993, after being hit by a car while attempting to cross the Long Island Expressway.

After his brother’s death, Dumile fell into a slump, friends said. He became withdrawn, KMD fell apart, and he stopped writing music.

But he rallied in the 1990s, giving concert at open mic events and donning the metal mask. Friends said on Saturday that the mask came from Dumile’s interest in the Marvel Comics character Doctor Doom. The character was featured on Dumile’s 1999 debut solo album, “Operation Doomsday.” From then on he rarely appeared without the mask.

Frei Speech said the mask forced listeners to look beyond him and listen to his music.

His aunt Lystra Ryce, a New York City public school science teacher, told the crowd how thankful she was to the City of Long Beach for the dedication ceremony, and how much she mourned Dumile and his brother. “They are gone too soon, but not forgotten,” Ryce said, adding that both “brought excitement to the family.” She recalled how a young Daniel walked down the aisle at her wedding in 1977 holding a Bible.

He would go on to achieve national and international fame. He was known for his intricate wordplay, which enchanted audiences. After his death, Variety magazine described him as one of music’s “most celebrated, unpredictable and enigmatic figures.”

From 2003 to 2005, Dumile released four solo albums and three collaborative albums, including the acclaimed “Mm . . Food.” “Madvillainy,” from 2004, recorded with producer Madlib, is regarded as a landmark album in hip-hop.

Saturday’s event drew black and white, young and old. City Councilman Mike Delury, who is over 60, was an enthusiastic supporter of the street renaming. “It may come as a surprise,” he told the crowd, “but I am not an aficionado of hip-hop. Until a few months ago, I had never heard of Doom. But it has become clear that Doom’s acclaim is worldwide.”

Maurice Mitchell, a cousin of Dumile’s and a national director of the Working Families Party, said he is called upon to speak across the nation. “But this is different,” he said. “I was given five minutes, but I could take five hours. I was up all night” trying to think of what to say.

“We as a family got the 360” of Doom, Mitchell said. “We saw his social anxiety, his sense of humor. He breathed possibility. He was hip-hop.”