A vet who knew the secrets 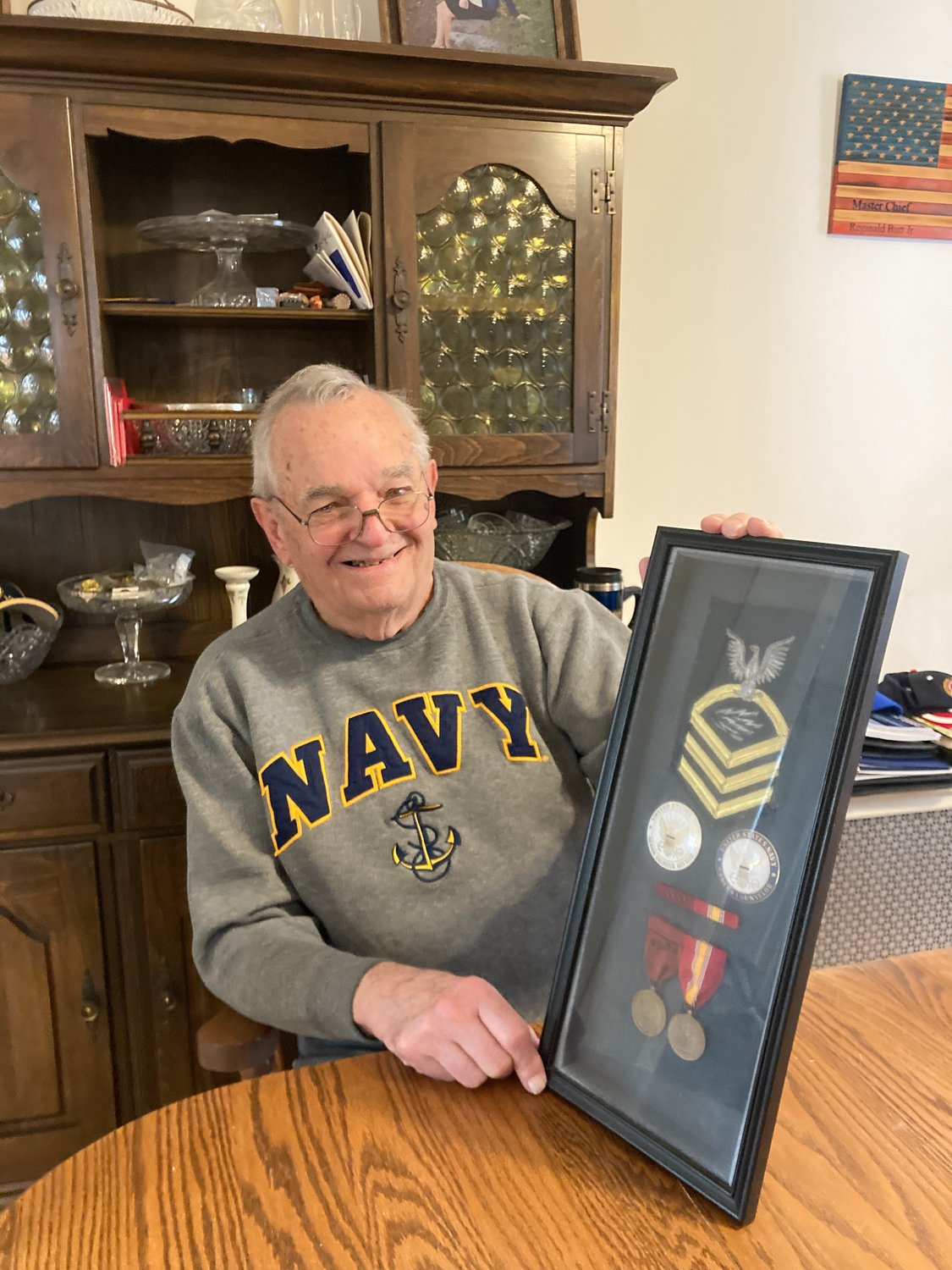 Reginald Butt, who was a chief radio operator in the Navy, received medals for his service. He is the commander of Oyster Bay’s American Legion.
Laura Lane/Herald
Previous Next
By Laura Lane

Reginald Butt Jr. graduated from Oyster Bay High School on June 24, 1956. Four days later, he joined the Navy. His father, Reginald, who had been in the British Navy, was “tickled pink,” Butt said.

“I always liked the Navy,” said the 84-year-old Oyster Bay resident, who has lived in the hamlet since he was an infant. “My dad used to talk about his service in World War I. His stories were inspirational.”

When Reginald Jr. was sent to Virginia to train as a radio operator for six months, he learned Morse code. But then he was switched to mastering the Teletype machine. His job was to read and transmit incoming classified messages.

For the next eight years, Butt worked as a radio operator for the Navy at various locations from Massachusetts to the Bahamas.

When he was transferred to Virginia, he was on shore duty for two years, which allowed him to go home on weekends to visit his family. When he met Maryanne DiLorenzo, the focus of his visits changed. She was one year his junior and also an OBHS graduate, and Butt was smitten.

In 1964 he took two weeks’ leave to marry DiLorenzo. They rented an apartment in Virginia, but six months later Butt was ordered to go to Jakarta, Indonesia. He served there for 17 months.

Maryanne returned to Oyster Bay to live with her sisters when she was three months pregnant. Butt didn’t see his son, Reginald, until he was 11 months old.

As radio man first class in Indonesia, Butt handled the communications for all of the military branches. Pro-communist demonstrations in 1964 and in 1965 culminated in a coup on Sept. 24, 1965. The Indonesian air force and guards at the palace overtook the government, killing six pro-American generals. The two that survived mounted a counter-coup.

“Their concept of life and death was different there,” he said. “We were told if when you walk somebody drops (dead) in front of you, to step over, walk and don’t stop. If you were of Chinese descent, even if you lived in Indonesia for decades, you were killed.”

The first day of the coup, he drove an Army sergeant to the American embassy, where they saw the military’s tanks and machine guns pointed at the building, Butt said. Even so, they were permitted to enter.

“When we went back to work at the embassy the next day, we saw the same equipment, but different troops were manning it,” he recalled. “They took it back overnight. The weapons were pointing away from the embassy.”

Although those in power favored the U.S., everyone had to follow new curfews and roadblocks, which lasted for months. “We had to stop at the roadblocks, and we never knew what would happen there,” he said. “The curfew was from 6 p.m. to 5 a.m. When I was busy with too many communications it was past that time, and I had to sleep overnight at the embassy.”

Before the coup, Butt was told his wife could move to Indonesia. She had his car and furniture shipped there the first week of October 1965.

There had been no mail for four weeks. During the coup Indonesians tried to overtake the Pan Am Airlines carrier that delivered the mail. The carrier would not travel to Indonesia as a result.

There was no phone service, either, because during the coup the circuit boards had been destroyed by gunfire. So Butt had no way to contact Maryanne to tell her not to come. But Washington sent her a telegram with those instructions.

“She stayed with her sisters, but my car and all of our furniture were on a ship,” Butt said. “I gave the sergeant power of attorney to sell my car when it arrived, but my furniture took a trip around the world. Six months later we got it back in Oyster Bay.”

Butt and other non-essential workers were ordered to leave Indonesia at the end of 1965. He volunteered to go to Vietnam, but the Navy wouldn’t approve back-to-back tours. Butt said he was disappointed.

“You train and you study and do everything in communications, and this was the time for me to put it into effect,” he said. “I would have been on the ground floor, and that’s what I was looking for. I could have set them up in Vietnam and got everything going.”

Instead he was transferred to a ship in Virginia, and was in charge of communications for two years. Maryanne joined him, and the couple’s second son, Philip, was born there.

In 1967, the Navy sent Butt to its advanced electronics school in Maryland for a year. He did so well that the school requested that he stay on as an instructor for two and a half years. During that time his family grew with the birth of his daughters, Carmela and Elizabeth.

Then he was sent to work on two ships in New Jersey for four years, and his wife and family followed. They lived there for a year, but then Butt bought a home in Oyster Bay. He commuted to New Jersey for three years.

During his last year in the service, he was posted at a Naval air station in Maryland. When he got there, he put in his papers to retire in 1975. When it came time for him to leave, a captain tried to persuade Butt to reconsider.

“The captain said he’d cancel retirement, but when he asked my wife, she said no,” Butt said. “The captain looked at me and said, ‘I guess you’re going home.’”

Butt spent the next 25 years working for the defense industry, setting up simulated submarine control centers at naval bases across the country. “He was gone a lot,” his daughter Carmela recalled. “What people don’t get is with technology now you can Skype or FaceTime. There were no long-distance calls on the ship back then.”

Butt retired in 2000, but he didn’t like being idle. So he took a part-time job at Dodds & Eder in Oyster Bay.

“I went from building simulators to taking care of flowers,” he said with a laugh. “It was something different every day, and I met different people.”

When he was laid off eight years later he decided to retire.

Most people in the hamlet know Butt for his activism in veterans groups. He joined the national American Legion organization in 1991, and members of Oyster Bay’s Quentin Roosevelt Post 4 reached out to him in 1993, leading him to transfer his membership. He became the commander of the Oyster Bay legion in 1997, and has served in that position on and off ever since. He’s currently the commander.