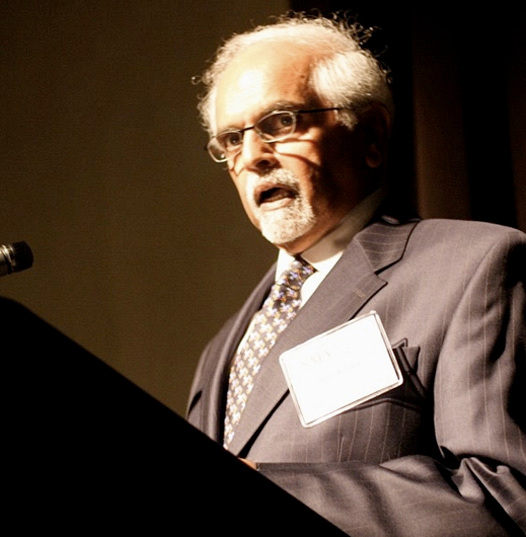 Amrit Kakaria, when he was inducted into the SAJA Hall of Fame in June 2005 co-founder Sree Sreenivasan.
Courtesy Preston Merchant

Amrit Kakaria, a leading Indian-American journalist in the U.S., and a former resident of Rockville Centre, died on Sept. 26. The cause was a heart attack (he had been battling cancer, but it was in remission). He was 72. Kakaria retired in 2002 after 45 years in the media business, most recently as head of U.S. operations for the India Today group.

An early member of the South Asian Journalists Association, Kakaria played a critical role in the group’s growth. In 1996, he wrote a personal check for $2,000 to launch its most influential program, the SAJA Journalism Awards.

“Amrit was SAJA’s guiding spirit and a mentor to dozens of us in the media,” said Sree Sreenivasan, SAJA co-founder and a professor at Columbia Journalism School. “His passing is a tremendous loss to all South Asian journalists in the U.S.,” he said.

In 2005, Kakaria was inducted into the SAJA Hall of Fame, which recognizes pioneering South Asian journalists for their contributions to U.S. media.

“Amrit was involved with SAJA from its very early days and cared deeply about SAJA,” said John Laxmi, SAJA treasurer and board member. “He took the liberty to call me and email me every now and then to give me tips, advise and admonitions to keep SAJA on its track and committed to its mission. Anyone who has dealt with Amrit will miss his kind and gentle friendship,” he said.

As part of SAJA’s 15th anniversary celebration in 2009, Kakaria was profiled by Sweta Vohra. From her SAJAforum post: “Amrit Kakaria is an industry veteran who has had a hand in shaping the South Asian media landscape....Kakaria has been part of SAJA since its birth in 1994. For him, the organization fulfills a personal aspiration to unite ethnic Indian journalists. He looks to SAJA becoming a powerhouse with a stronger voice.

Kakaria, however, has a less aggressive future mapped out for himself. His personal mission: to improve his golf game.”

Born and raised in New Delhi, Kakaria earned his B.Sc. from Hindu College in Delhi University and also had completed a Thomson Foundation course for senior journalists in Cardiff, U.K.

He is survived by his, wife Bettina Kakaria, and other family members, including his brother Bal Kakaria.

Kakaria lay in repose on Sept. 28 at Moloney Lake Funeral Home in Lake Ronkokoma, near his Coram home. A cremation, for family only, was held on Sept. 29. A separate SAJA memorial service is planned soon.