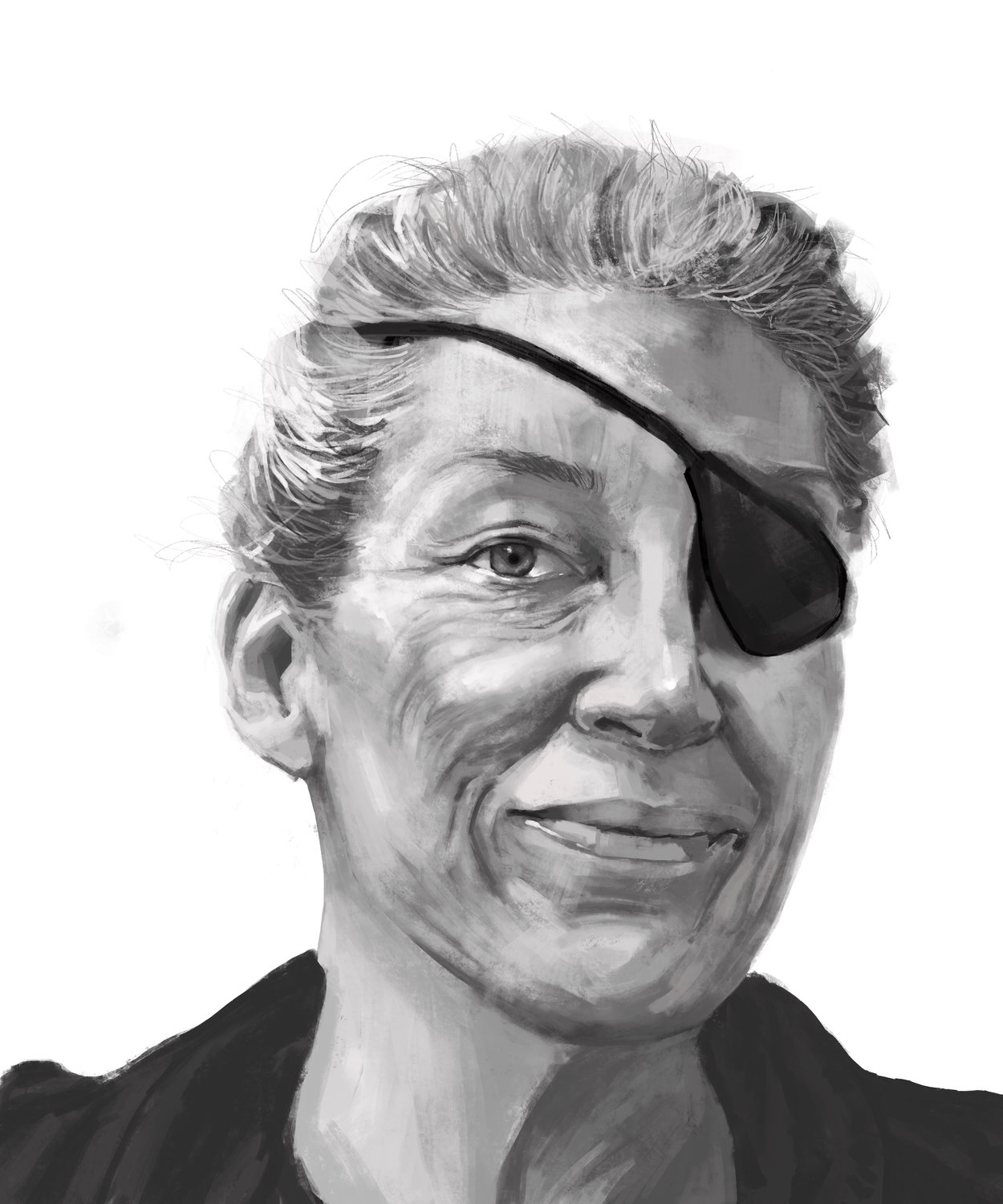 When Tina Tang created a portrait of Marie Colvin, she focused on what was perhaps her most distinguishing physical identifier, the eyepatch she wore.
Courtesy David Packard 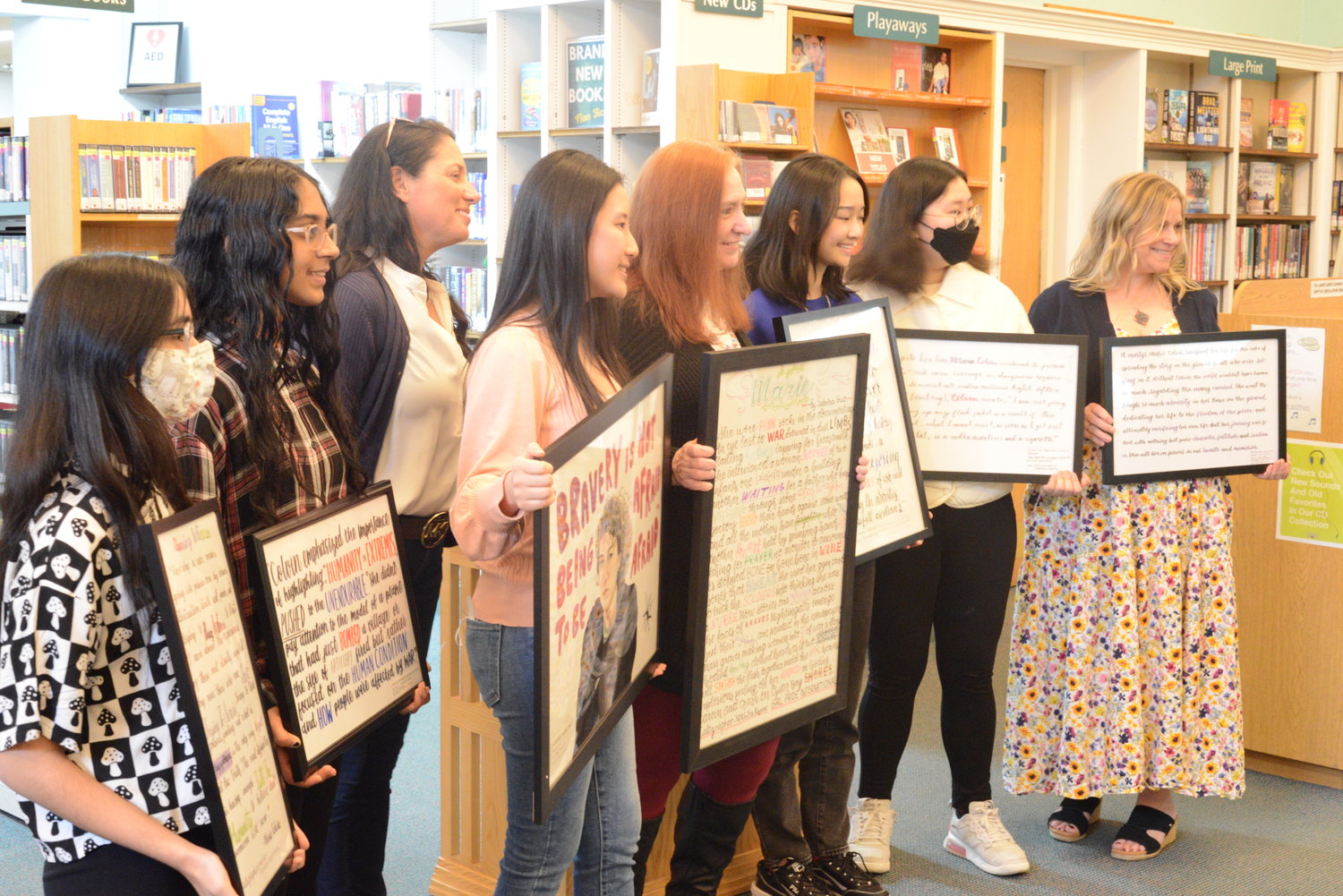 Members of Girl Pride International with their contributions to the Marie Colvin Art Exhibit at the Oyster Bay-East Norwich Library on March 25, when they were recognized for their participation.
Steven Keehner/Herald
Previous Next
Steven Keehner

Despite the Syrian government’s efforts to stop her, Marie Colvin entered the country in February 2012. Although she grew up in East Norwich and was a 1974 graduate of Oyster Bay High School, her career as a foreign correspondent for the British newspaper The Sunday Times had, by 2012, taken her around the world. It seemed only natural for her to be in Syria, given her specialty of covering the Middle East.

But artillery fire struck a media facility in Homs on Feb. 22, 2012, killing Colvin and photojournalist Rémi Ochlik. Colvin’s death shocked the media and political worlds as well as her hometown. A decade later, her legacy is still being commemorated.

The Marie Colvin Art Exhibit was created by Sabrina Guo, a 16-year-old Oyster Bay Cove resident and Syosset High School junior, in partnership with the Marie Colvin Memorial Foundation, to honor its namesake and to raise awareness of recent journalist casualties in Ukraine since the Russian invasion.

The works, 10 in all — portraits, poems, essays and calligraphy — were on display at the Oyster Bay-East Norwich Public Library in March.

“The arts and writing are media that are just so visceral, and they touch the human soul,” Guo said. “I thought that would be the best way to carry an even greater meaning of what it means to cover war stories as journalists or fight for the freedoms of the press.”

Although the artwork focused on Colvin, the artists took different approaches. Tina Tang, 17, of Syosset, a junior at Friends Academy, wanted to highlight Colvin’s most noticeable physical feature in her portrait, “Marie Colvin: Voice for the Voiceless” — the eyepatch she wore after losing the sight in her left eye in an explosion in 2001.

“Eyes are paths to a person’s heart,” Tang said. “I wanted to focus on Marie’s eye in the portrait, hoping to convey her perseverance and courage through it.”

Colvin’s unwavering commitment to her work inspired Brian Li, a 17-year-old student at the Pingry School in New Jersey. His essay, “The Remarkable Reporting of Marie Colvin,” focused on how Colvin made a name for herself as a human rights reporter, even as she faced death.

Li said that acts like her reporting in 1999, which ultimately saved 1,500 women and children from an East Timor compound besieged by militias, particularly inspired him. “I hoped to display Colvin’s character and achievements through my writing, which I tried to do by conducting research on her life,” Li said. “Afterward, I outlined the main events and topics that I wished to highlight as my overall framework, filling in the details as I went.”

Guo formed Girl Pride International, a global nonprofit organization dedicated to the empowerment of girls, in 2018. She reached out to members to contribute to the art show. Before they got involved, some of the artists said, they were unaware of Colvin’s story.

“To learn about one of our own hometown resident’s extraordinary life and legacy will indubitably galvanize us to fight through adversities like Marie Colvin did,” Tang said, “and carry on her mission of making positive impacts in the world through journalism and humanitarian endeavors.”

Guo spoke at a ceremony at the library on March 25 recognizing the show, as did State Senators Jim Gaughran and Kevin Thomas, and Oyster Bay Town Clerk Richard LaMarca. Speaking on behalf of the town, LaMarca said that the day had been designated Girl Pride International Day.

“We do proudly join with Girl Pride International in supporting and advocating for girls,” he said, “especially those who are disadvantaged or in need, knowing that they are a part of our world’s future.”

“I know the tragic story of Marie, but the inspirational story of Marie is just so, so important,” Gaughran said. “That’s why I’m so inspired by this wonderful artwork in memory of Marie, to carry forward her tradition of making sure that we all live in a free democracy.”

Marion Dodson, the adult programming librarian, praised Guo’s efforts. “She really led the show, because she knew what she was doing,” Dodson said. “She’s very poised for a 16-year-old.”

Though she never met Colvin, Guo said she continues to be inspired by her. Growing up in the same area, she knows that they have walked the same paths, seen the same sights and shared a desire to help others. An artist herself, Guo said she wants to continue bringing the truth to light through her work.

“She was a passionate fire of hope in a time when foreign wars and the ensuing atrocities were not receiving nearly enough global attention,” Guo said of Colvin. “She was this blazing light that persevered in the name of truth and humanity, and she kept burning until she ultimately lost her life in the line of duty.”

The Syosset Public Library is now displaying the Marie Colvin Art Exhibit, including a new portrait by Tang. For further information, call (516) 921-7161.