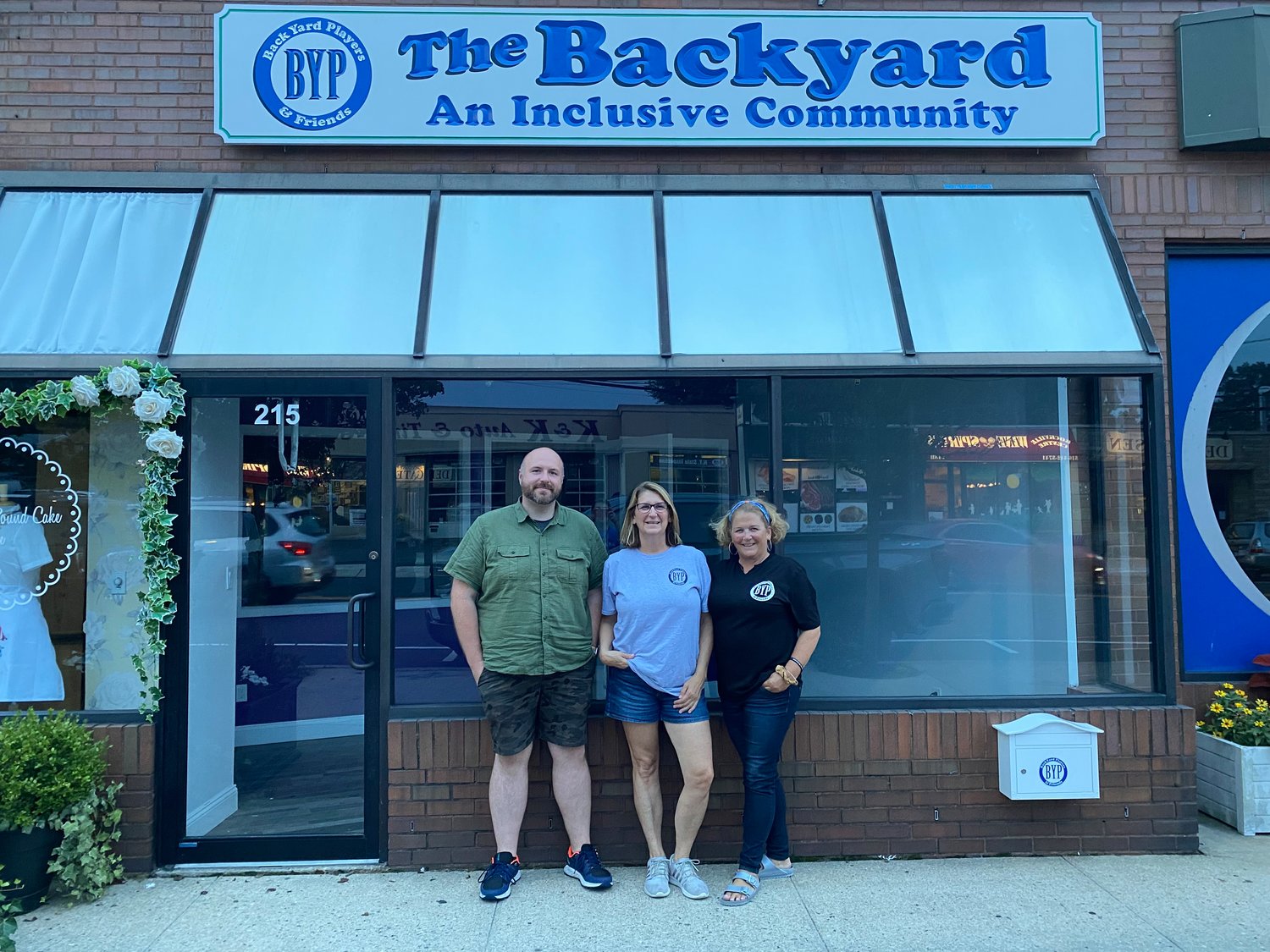 Backyard Players Co-founders Ryan Delaney, Cristina Daly and Ellen White in front of their new building, which will enable them to bring art and theater programs to students in the Special Education Department.
Tom Carrozza/Herald 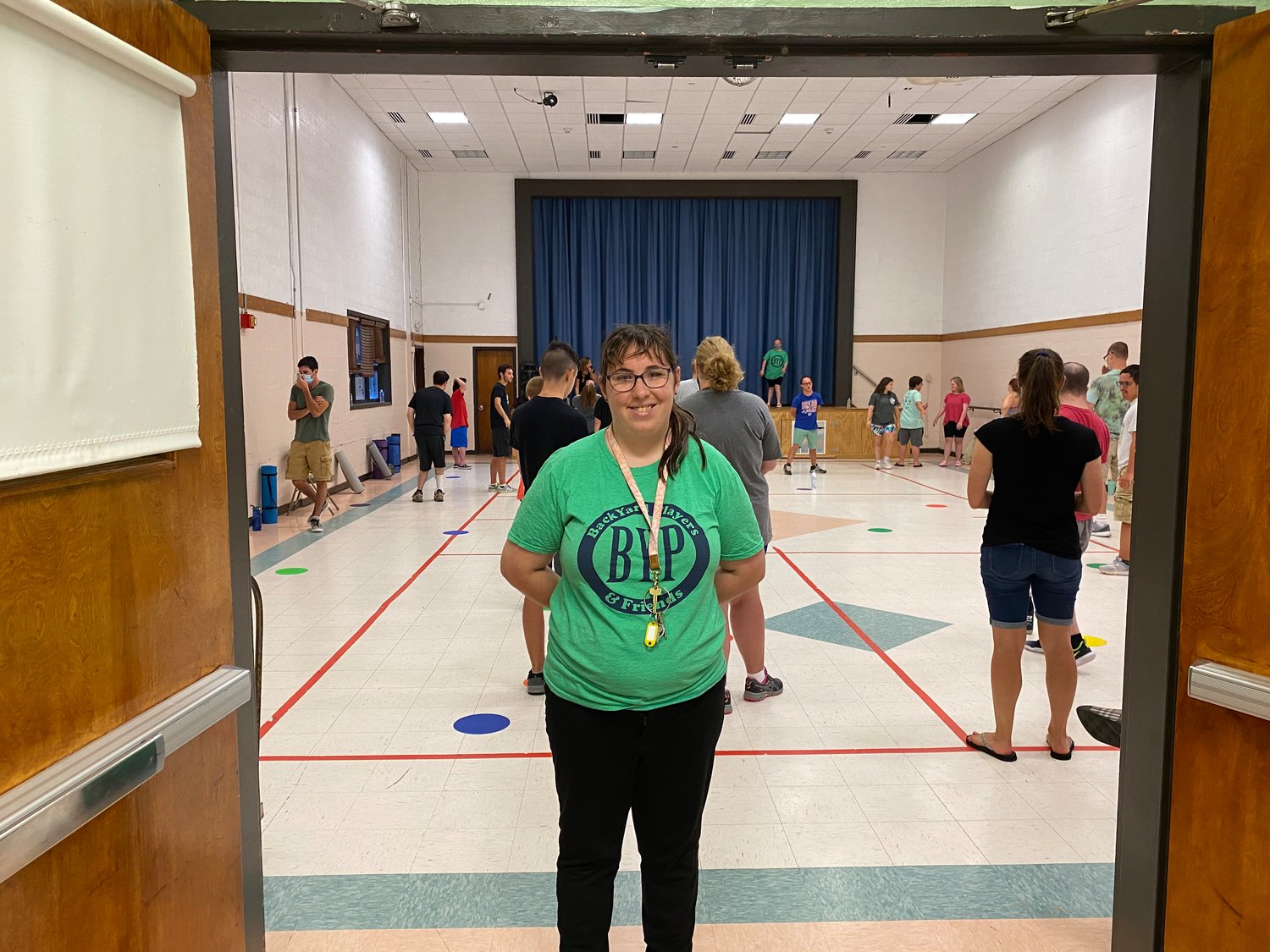 Kaitin Christenson took part in one of the Backyard Players’ yoga classes at the Recreation Center.
Tom Carrozza/Herald
Previous Next
By Tom Carrozza tcarrozza@liherald.com

Late last month, a new sign on Long Beach Road sparked curiosity among some Rockville Centre residents. In welcoming blue letters on a white backdrop, it reads, “The Backyard” with “An Inclusive Community” beneath it. Though it’s a new storefront, the group that will open it in early September is a community mainstay: the Backyard Players and Friends.

The nonprofit, arts-based group has been around for the last decade as an extension of South Side High School’s Centre Stage program, which works with students in the Special Education Department to stage an annual theatrical production. The Backyard Players have made a comeback during the coronavirus pandemic, which has led to the opening of the storefront.

The group has used facilities at Molloy College, the John A. Anderson Recreation Center, Sportset, the Knights of Columbus, St. Mark’s Church and Nursery School and the Rockville Centre Public Library in the past, though the pandemic paused all indoor activities. “We didn’t really have a place,” said Ellen White, a co-director of the Backyard Players. “So we were really at a great risk of losing our program.”

That could have had a major impact on the community, White said, noting that she and Co-directors Ryan Delaney and Cristina Daly have served those in need for many years. The drop-off in social activities for people with developmental disabilities after high school is so severe, White said, that it’s known as “falling off the cliff.”

The Backyard Players give participants a chance to socialize while learning about theater, yoga, photography, dance, writing and art. Classes have attracted almost 50 people, giving administrators another reason to open the new facility.

Kaitlin Christenson, a participant in the program for over three years, lauded the staff’s work. “They’re like our second family,” she said. “They’re the reason we’re here.”

Elena O’Donnell is a member of the group’s board of directors. Her son, Ryan, 21, graduated from South Side High School in June, and she noted that even though he is non-verbal, he has blossomed socially because of Centre Stage and the Backyard Players. “Our kids can’t really have play dates at their house,” O’Donnell said. “The program and the new building give them a place to all gather safely, be more independent and socialize.”

With locations harder to find and staff members to pay, the program was in dire straits until the co-directors applied for a small-business loan from Barstool Sports’ Barstool Fund. Daly’s son Owen suggested that she apply for the funding, and the Backyard Players were chosen earlier this year. Since then, the publicity has helped the group acquire several other grants, which in turn have helped it establish new programs.

“It was scary, but with support from everybody, we were able to get through it,” Daly said. “With the new space, we’re excited to show everyone what their money did.”

With Covid-19 vaccinations increasing and the Recreation Center returning to regular operations, White, Daly and Delaney started looking for a permanent home. One day last year, when White was in the Polka Dot Pound Cake store on Long Beach Road, its owner, Lisa Umansky, suggested the vacant storefront next door as a location.

Construction inside of the building started this week, and programs are expected to start in late September. The fall schedule will starts in the third week of the month, with events at the Recreation Center and the new building until it is complete.

White said that with the new facility, the group can control its own destiny, and the directors can more easily create a schedule of events. “I think it’s most exciting for our families to know we’re secure now,” she said.