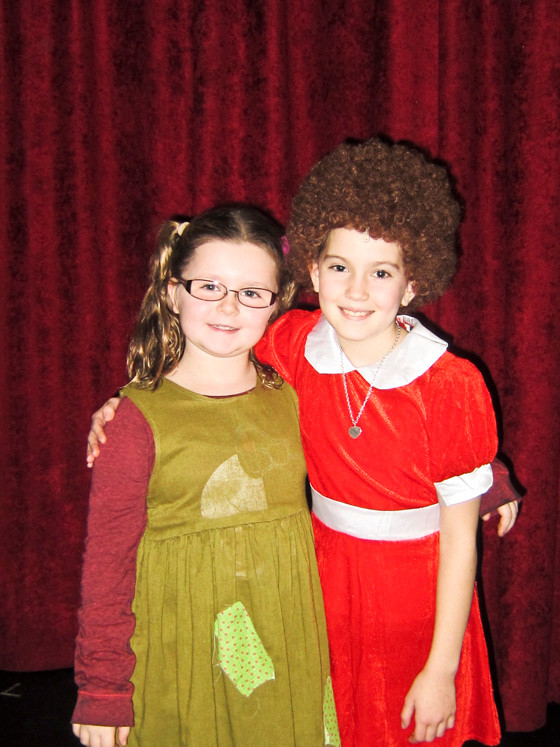 There’s always “tomorrow” for eight-year-old Katie DiIorio, left, who appears as Molly, with Ava Casiano, starring as Annie, in the Merrick Theatre & Center for the Arts’ staging of the beloved musical this month.
Courtesy Renee DiIorio
By Iris Wiener

It’s a no-brainer for most little girls when it comes to auditioning for “Annie”; the sheet music for “Tomorrow” is immediately at their fingertips, and they prepare to belt their best. Upon hearing of the upcoming production of Merrick Theatre & Center for the Arts’ Annie, Oceanside’s Katie DiIorio thought outside the box. Instead of “betting her bottom dollar,” eight-year-old Katie chose “Never Fully Dressed”, which earned her one of the rare child spots — the youngest orphan, Molly.
“I was really scared,” the young actress says of auditioning. “I pretended that nobody was there and I sang that song because I wanted to do something different. There are a lot of good parts in that song, and it would make me stand out from the rest.”
Katie’s forward thinking and spunk have been nurtured by the popular community theater for five years. As a member of the youth program, Katie broke out of her shell with Merrick Theatre classes such as Broadway Babies.
“She has grown tremendously,” says Tommy Strahl, program director, who is directing this production of “Annie”. “When Katie first came to me she was very shy, she barely even spoke without looking at the ground. She’s grown to not only loving [musical theater], but doing it really well. She follows directions, she takes direction really well, and she practices. She’s also very animated,” he says of the traits that set her apart from other child actors.
Merrick Theatre’s programs are designed to build children’s love for theater. With classes offered for aspiring performers aged anywhere between three and 17, there’s something for everyone. According to Strahl, students take a series of 12-week classes that culminate in a family night cabaret show.