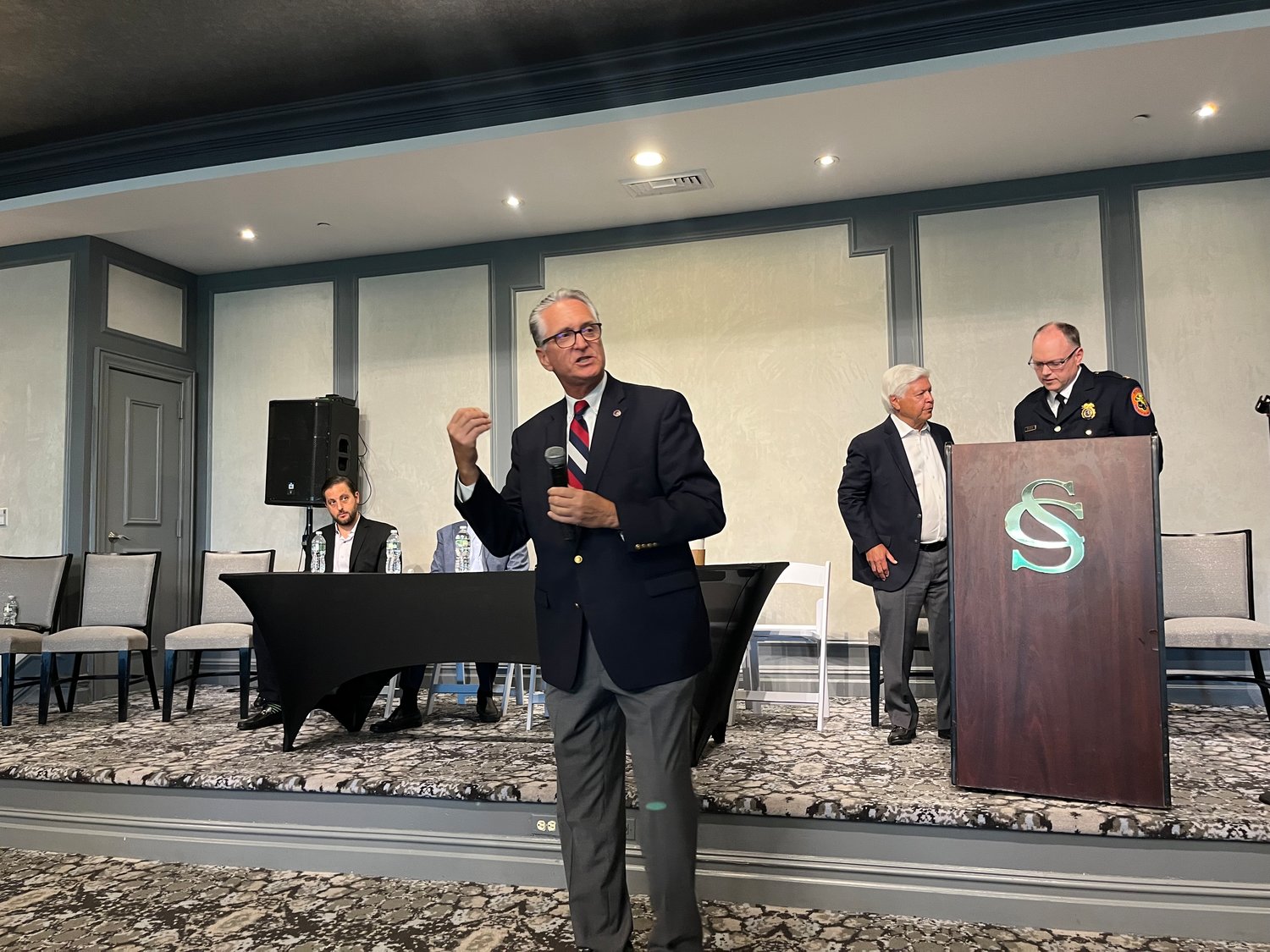 They will stop coming when they stop finding unlocked vehicles in the community.”
Jeffrey Raymond, Nassau County Police Dept.
By Lisa Margaria

“We’re here because over the last 18 months, there have been what we consider to be an inordinate amount of break-ins — car break-ins and auto thefts,” Mayor Mark Weiss said. “Statistics suggest that our community is actually experiencing less than most, maybe less than all the other communities in Nassau County.”

The last time the county Police Department held a similar meeting in the village was in 2019, after which burglaries there “plummeted,” NCPD Detective Sgt. Jeffrey Raymond said. He shared prevention methods at the June 14 meeting — described by Weiss as “zero-cost option(s) on how to prevent break-ins and perhaps thefts of automobiles.”

“If you just call nine people over the course of the next couple of days,” Weiss told the group of roughly 50, “we would saturate communities with the same message that Detective Raymond gave us three years ago, and I’m telling you overnight, the reputation that we would have in this village (among criminals) is, ‘Don't bother coming.’ It will absolutely shut down the operation.” He added, “If you simply spoke to nine other people, we would have 450 homes notified by friends.” The village has a population of around 1,500.

Raymond’s prevention methods are guided mostly by common sense, from locking vehicle doors and removing key fobs — which can also prevent criminals from gaining access to garage-door openers — to leaving lights and the television on when you’re not home.

Removing key fobs from vehicles is the one “zero-cost solution that will be 100 percent effective,” Weiss said. Criminals “will stop coming when they stop finding unlocked vehicles in the community,” Raymond added.

He also encouraged residents to install outdoor lighting, exterior cameras with views of the street or around the home — not just the front door — and alarm systems. Lighting and cameras may help capture clear images of criminals — at your home or a neighbor’s — while an alarm system will scare them away and give police an accurate time of a break-in. The NCPD has also stepped up patrols in the village.

Trustee Tom Cohen, the village’s liaison to the police, emphasized the importance of calling 911, saying, “I urge all of you, if you see something — even if you don't think it's an emergency” to call. Cohen added, “Please don't delay. If you feel you have to call 911, do it right away, because every minute that goes by makes it harder on us and increases the chances that (criminals) can get away.”

Hewlett Harbor has had four stolen cars reported this year — all of which had key fobs inside — and just last month there were three more attempts in the village, police said. Inspector Vincent Boden, commanding officer of the NCPD’s 4th Precinct, noted that most attempts to steal cars take place between 2 and 6 a.m., though the “new trend is during the day” — especially in parking lots, Raymond added.

Raymond described these criminals as “brazen,” checking for unlocked vehicles in broad daylight. One resident shared footage that his Ring security system captured on June 11 at around 7 p.m. It shows a perpetrator pulling up in a Porsche and, in the resident’s driveway, trying the door handle of one locked car unsuccessfully, finding the door of another car unlocked, getting in, getting back out after roughly 10 seconds and driving away in the Porsche. Fortunately there was no key fob in the unlocked vehicle. Trying to open car doors like this (with the intent to steal) has been nicknamed ‘clicking’ by police.

Criminals are typically not targeting or watching anyone specific, Raymond explained. “They simply drive into your neighborhood and just look,” he said. That’s why keeping a house well lit, or even having a loud pet, may deter them.

He said that bail reform and “raise the age” laws were contributing factors in the increase in burglaries, and especially auto crimes. “When you have no repercussions for doing a crime, what is going to stop you from doing that crime again?” Raymond said. “And if that person is 16 or 17 years old, they are adolescent offenders,” so the punishment is minimal.

“People are upset, people are angry, people are afraid,” Weiss said. “We understand that. That’s why we're here. And that’s why we’re working night and day and trying to deal with this problem.”

Two weeks before the meeting at Seawane, members of the NCPD walked through Hewlett Harbor, handing out fliers and reminding residents to lock their vehicle doors. “We’ve been able to start to spin the numbers the other way and decrease victims by just telling people to lock their car doors,” Raymond said.

In 2021, the village increased Ring security camera coverage and installed license plate readers, which have “led to arrest and incarceration for really, really organized burglary crews,” Raymond said. Even when a license plate has been stolen or switched, the readers have been a huge help to police.

Village officials are in constant contact with the NCPD, in the interest of keeping the village as safe as possible. “We will help you by putting the resources here,” Raymond said, “but we also need (you) … to help us by taking away that one thing they want, and that's the key fob.”