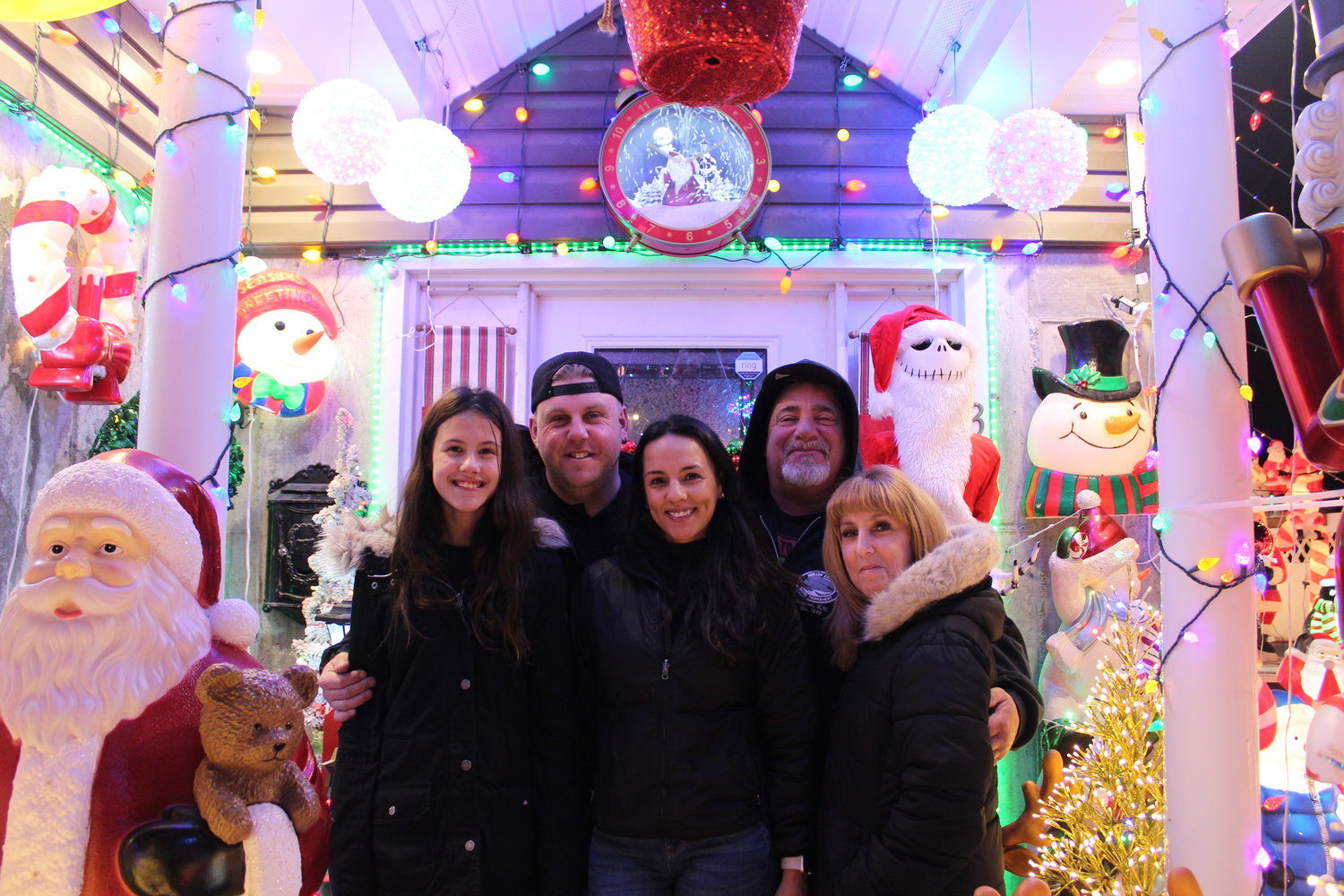 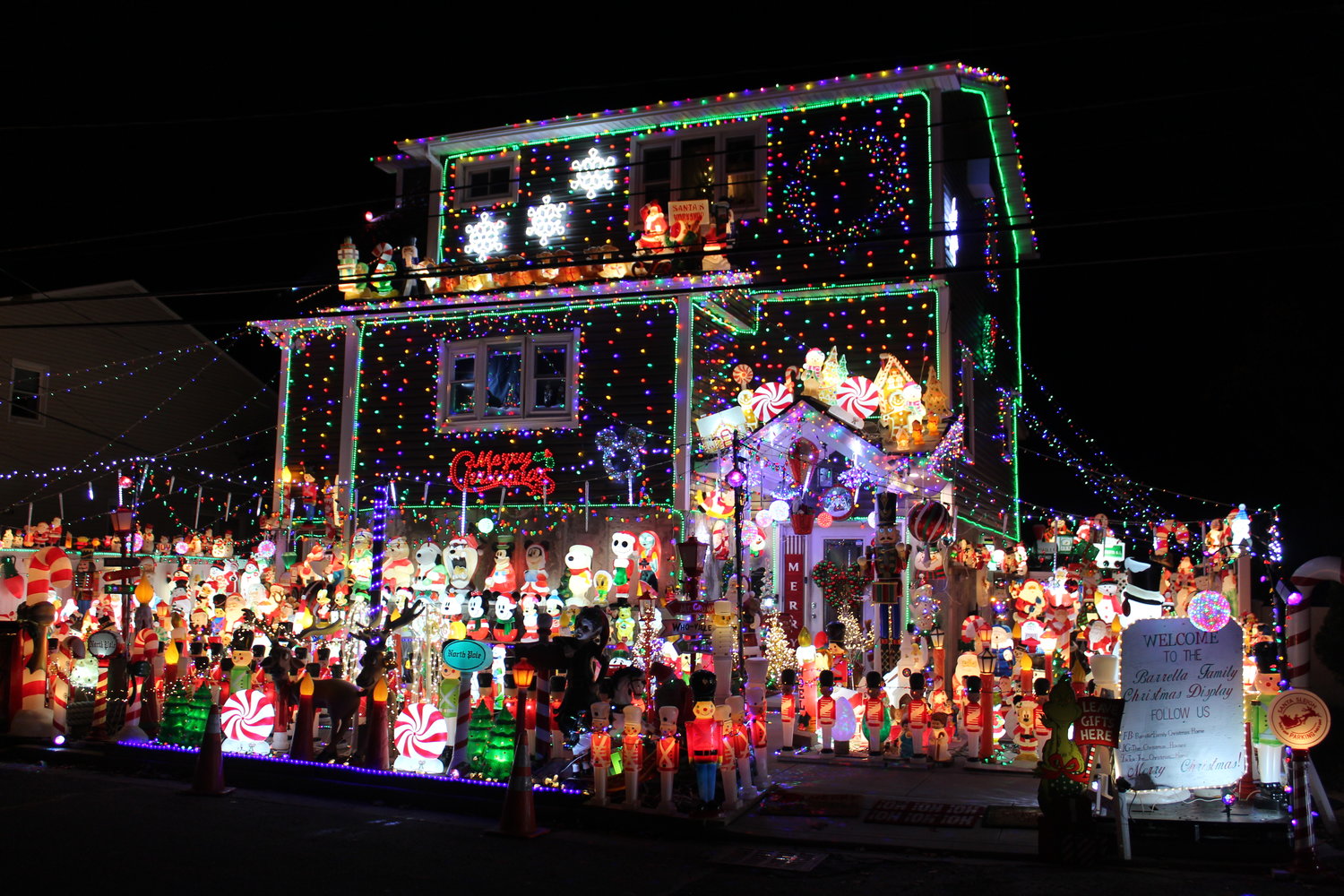 Located at 39 Brighton Road, those who wish to take a picture with Santa can stop by Dec. 10 from 6 to 9 p.m.
Karina Kovac/Herald
Previous Next
By Karina Kovac

For 31 years the Barrella family has gone to extremes to decorate their Island Park house for Christmas, each year bigger and better. Before that, while living in Long Beach, they had almost a decade to start their collection of blow molds, now totaling about 730. Thomas Barrella Sr. started the tradition nearly forty years ago, which his son Thomas Barrella Jr. has picked up and expanded in the last five years.

It all started for Barrella Sr. when he was in the car with his mother driving into New York City as a child and he saw a single shimmering house with ornate Christmas decorations.

“I was like ‘wow all their figurines are beautiful.’ It’s like something beyond belief, I would love to do this to my house,” he thought at the time. Working on a newspaper route he began to save up when he was around 16 years old and then he would, “Spend all my money on lights.”

He started humbly with the classics like a nativity scene, Santa Claus and snowman decorations, increasing each year after. In the last five years with his son taking over there’s been a lot of improvements Sr. said.

“It’s been getting bigger and bigger, he took it over to the extreme,” he said. And Jr. doesn’t mind the torch being passed to him either, “I enjoy it a lot, so to me it was a no brainer, I’ll keep doing it, I’m not going to stop. I enjoy it for the kids, the kids love looking at the lights,” he said.

The same reason his father does it, “Just to watch the kids’ faces. It’s always been a thing for me, because it happened to me when I was a kid,” the older Barrella said. To them, it doesn’t matter their electric bill is around $500 to 600, with the help of solar panels.

The younger Barrella said he tries to have all the Christmas lights up by Thanksgiving so those who pass by can enjoy it for exactly a month. And that they have regulars each year who stop by and take pictures to send as their Christmas card. “Everyone knows it’s the Christmas house,” he said.

Improving each year, Barrella Sr. is doing more than just decorating, it’s become interactive through a partnership with Toys of Hope.

Toys of Hope operates year-round to collect toys, books, clothing and more to distribute to needy and homeless children and their families.

“We try to aim toward teenagers because teenagers that are poor really get overlooked,” Barrella Sr. explained, “We try to get gift cards mainly.” So far, they’ve donated roughly 2,500 this holiday season.

Anyone who comes to visit the Barrella house at 39 Brighton Road can drop off items to donate, write a letter to Santa, or pretend to be and elf in a photo station. And on Dec. 10, the man himself Santa will ride in on a fire truck to the house at 6 p.m. for photos from then to 9 p.m. Barrella Sr. said, “Every year now (Toys of Hope) calls me up ‘are we coming down the block?’ I’m like absolutely. Santa Claus on back of the fire truck? It’s awesome.”

‘Tis the season Barrella Sr. says, “It’s all about giving, me and my wife were always like that, we always gave gave gave, we never looked for anything. We just try to do whatever we could for people. That’s the way we are.”