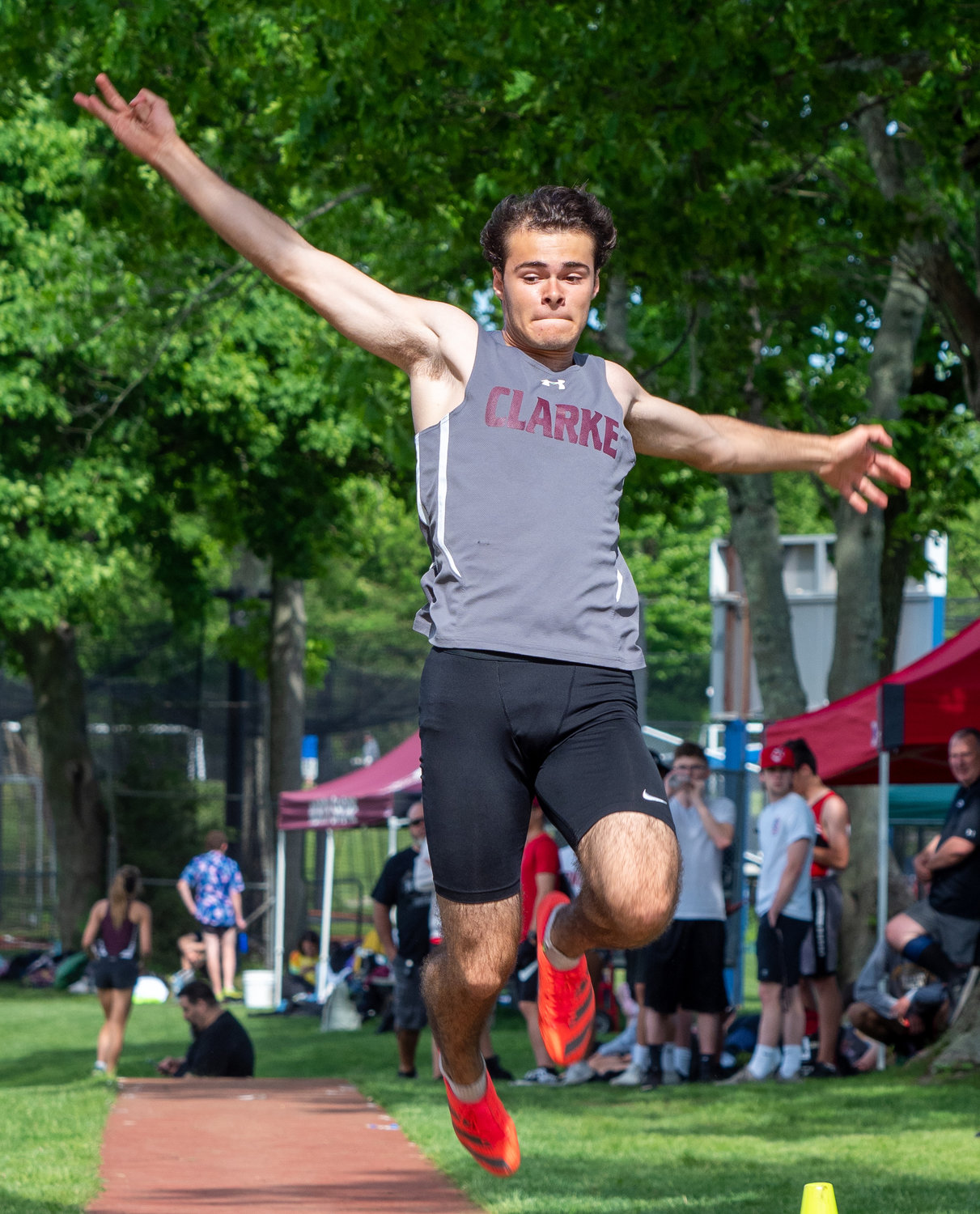 Senior Alex Pereira was clutch for the Rams in the Nassau Class A championships in the 4x100 relay and long jump.
Eric Dunetz/Herald
By Garrett D. Uribe

Two one-hundredths of a second - a slice of time almost vanishingly thin.

But for the Clarke boys’ track and field team, it represented a sliver of daylight.

In edging North Shore by the miniscule margin to finish second in the four-by-100-meter relay at the Nassau County Track and Field Championships on May 23 at Cold Spring Harbor, the Rams had pulled within striking distance of the meet's leader West Hempstead heading into the day's last event.

Eight points off the lead in team scoring at the sound of the final starter's gun, Clarke would set a season-best time winning the 4x800 relay in 8:44.72 to move into a tie atop the leader board at 84-all and sidle up to West Hempstead - which finished fifth in the race - as county Class A co-champion, bringing Clarke its first county outdoor title since 1987.

“I told the guys going into the last race, ‘We need to win this,” said Clarke coach Brian Doxey, whose team this winter won its first county indoor championship in 35 seasons. “I guess I got through to them. None of them were fresh, so to come through and run their best time is phenomenal.”

Senior Kenny He, juniors Jayson Emile and Andres Ventura, and freshman Ryan Melkun manned the title-clinching 4x800 crew for Clarke, while seniors Aidan Dauz, Kainoa Martin, Justin Uralil and Alex Pereira – in that order – ran the crucial 4x100 relay for the Rams in 46.26 seconds, finishing less than a half-second behind race-winner West Hempstead.

“We were able to stay close to a very talented team,” said Doxey. “It all came down to our 4x100 team giving us a chance.”

Winter All-American Liam Farrell took first for Clarke in the discus at county with a season-best throw of 130 feet, one inch – moving to No. 6 in the Nassau rankings. The senior also climbed to ninth in the county rankings with a season-best mark of 40-04 in the shot put to place second at the meet. “Liam being dominant all year is a huge reason for our team’s success,” said Doxey. “His performance at county is a big confidence booster going forward.”

Clarke finished first in the pole vault at county on senior Nikhil Panickssery’s vault of 9-00, while Pereira’s 20-06 in the long jump was second behind West Hempstead junior Jurell Hall’s winning mark of 22-00. The top three finishers in each of the meet’s events received All-County honors.

“This was the most exciting meet I’ve ever been to, as a participant or as a coach,” said eighth-year coach Doxey. “The seniors have been great leaders. I’ll miss them when they’re gone. But we’ve still got a little way to go.”