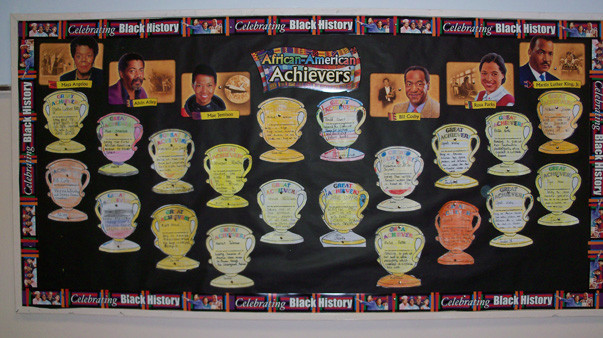 In anticipation of Black History Month, students at the George Washington Elementary School in West Hempstead put together a bulletin board depicting images and information about notable African-American achievers and historical figures.
Courtesy West Hempstead Schools
By Lee Landor

There are many things Lakeview NAACP President Bea Bayley wants people to take away from Black History Month — primarily that it’s a “travesty” that celebrating black history is limited to the month of February instead of being recognized year-round.

What Bayley wants children to learn in the coming weeks is that black history extends beyond the month of February, and that they must take it upon themselves to embrace it.

“Our history didn’t begin with slavery and it did not end with Martin Luther King,” Bayley recently told the Herald. “We are part of American history.”

In schools today, children are taught the very basics: they learn about Martin Luther King Jr., Rosa Parks, few other prominent historical figures and the Civil Rights Movement. That, Bayley asserted, is not enough: there are so many other people — “heroes” — and events to celebrate, and it is critical to teach about them, especially in schools districts like Malverne, which have predominantly minority students.

“Someone has to pass on the reasons why we’re still fighting for equality — things that kids today don’t know,” Bayley said. “They don’t understand the civil rights struggle.”

To combat this problem, the Lakeview Public Library has developed a significant black heritage section that it displays and promotes all year long. It also creates programs that celebrate black culture and history, including several for Black History Month, according to librarian Ivy Reckson.

The Black Heritage Collection contains circulating and reference materials that depict black experience, history and culture, Reckson said. There are books written by black and other authors that cover every subject from black studies and interests to government and literature, to music and art, to science, medicine and entertainment. The collection — which includes fiction and nonfiction titles from award-winning, best-selling and distinguished authors — also contains magazines, databases, music, CDs and movies.

Reckson said it is important that the library maintains a collection such as this and continues to expand it in order to cater to the Lakeview community. It is intended for “those who want to learn more about their own heritage and those who wish to explore how black people helped our modern world prosper and progress,” Reckson said. “The collection is designed to enlighten, educate and entertain the Lakeview community and everyone who enters the library.”

The library also has a digital electronic database called The African American Experience that serves two goals — “to provide rock-solid information from authorities in the field, and to allow African Americans to speak for themselves through a wealth of primary sources,” according to the library’s website, nassaulibrary.org/lakeview.

These are the types of things that should be integrated into the general curriculum, according to Bayley. It was at the high school in Mississippi where former Lakeview NAACP President Rener Reed attended in the late 1950s.

“We had black history every day,” Reed said of her experience at Richton Colored High School, from which she graduated in 1958. “Our whole education was about blacks who had been successful and we were encouraged to do likewise.”

This type of education should be applied everywhere today, Reed said. “There’s enough history out there — it should be a part of the curriculum,” she added. “ Our children don’t know enough. [We must] encourage our children to dig deeper and learn as much about their history as they can.”

Officials at the Malverne and West Hempstead school districts said they have planned several events to celebrate Black History Month. The Lakeview Public Library will put out displays, hang posters and host three events. On Feb. 5, history buff Faith Hutchinson will host a lively discussion about the book “They Came Before Columbus: The African Presence in Ancient America,” by Ivan Van Sertima. Charles Winslow will present a lecture with an accompanying display of historical items on Feb. 12, and on Feb. 26, from 2 to 4 p.m., BiLlee T and Marcia Pharr Thomas will sing, dance and entertain library patrons.