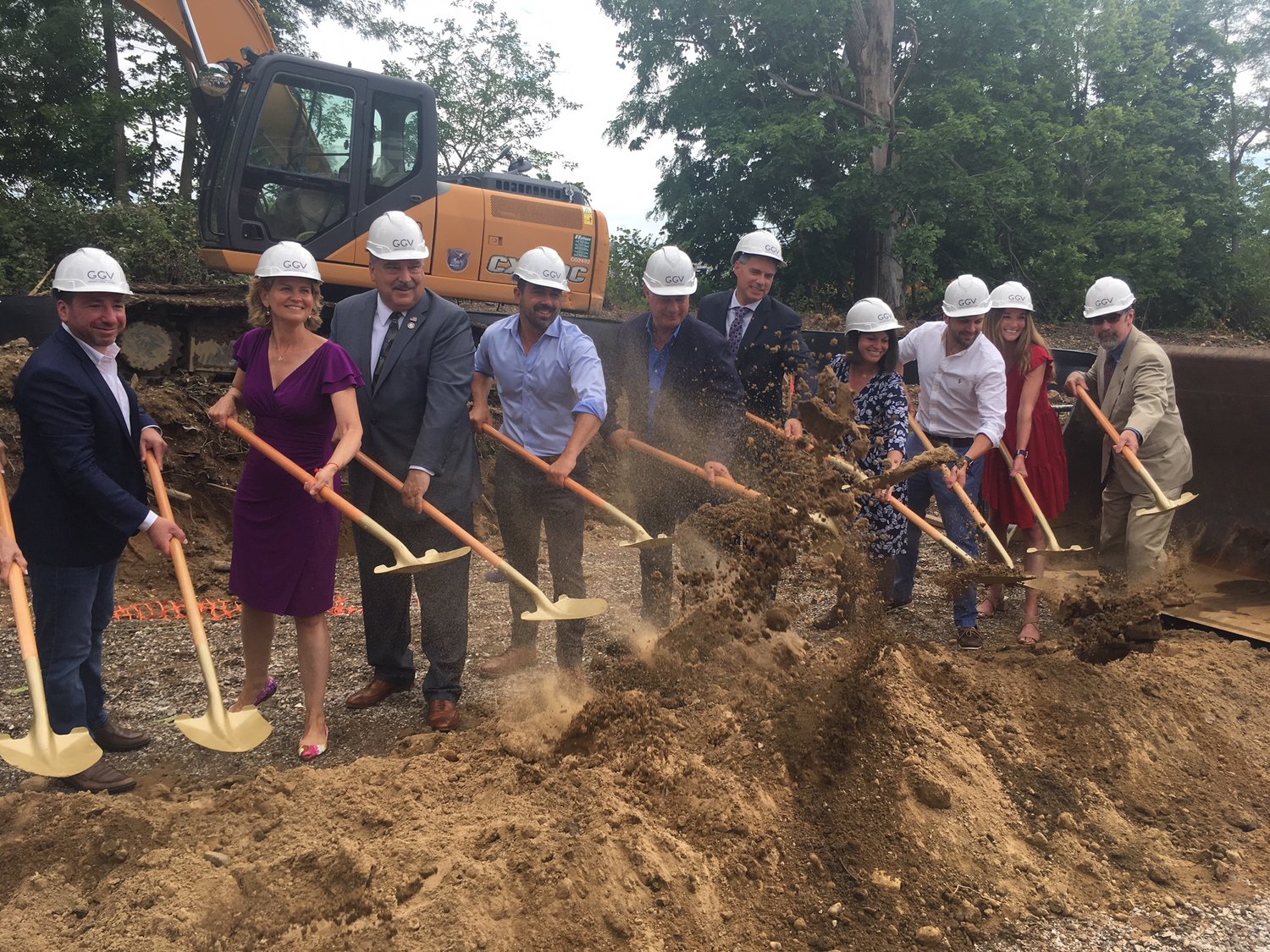 More development is in the works in Glen Cove, as construction begins on the first workforce housing to be built in the city in over a decade. As part of the Garvies Point waterfront development, Georgica Green Ventures, in partnership with RXR Realty, held a groundbreaking ceremony July 1 on a 55-unit development at 100 and 200 Dickson St.

“This is the first affordable housing to be built in Glen Cove in a very long time,” Georgica Green President David Gallo said. “We’re excited to be delivering it with RXR.”

The Jericho-based Georgica Green focuses on quality, long-term sustainable housing, according to Gallo, who said his company’s mantra is “Affordable housing has a place in all communities,” and that “diversity of race, income and age make our community better.”

The mixed-income, multi-family, transit-oriented rental housing complex is part of the 56-acre Garvies Point Master Development, being overseen by RXR’s Glen Isle Partners. The development is intended to revitalize and transform the underutilized waterfront acreage along Glen Cove’s shoreline at Hempstead Harbor into a vibrant place to live. The 55 units will be available to residents earning 30 to 100 percent of the area median income.

Georgica Green was selected by RXR to take “this piece of the puzzle and deliver affordable housing,” Gallo said, adding, “This is a massive development, and it’s incredible to be a part of.”

During the ceremony, Gallo praised the City of Glen Cove and its various departments for helping the project come together. “From the get-go, it was an incredibly smooth process to be developing here,” he said. “Affordable, quality housing is desperately needed throughout Long Island and has a place in all communities. It’s exciting and satisfying to bring this project to the vibrant city of Glen Cove as part of an ambitious revitalization of the waterfront. Georgica Green Ventures believes that affordable housing options like this one build a strong community. We hope that Garvies Point can serve as a model to other cities, towns and villages, demonstrating living well on Long Island is a reachable goal for everyone.”

Because the area being developed is a brownfield site, potentially containing contamination, there were several agencies and entities involved in the process. Gallo said the project could not have happened without the investment of New York state.

Brett Hebner, vice president of multifamily finance for New York State Home and Community Renewal, came from Saratoga to attend the ceremony. “We were very pleased to participate in the City of Glen Cove’s larger redevelopment plan of the waterfront area with affordable housing,” Hebner said. “We look forward to the finished product, which is really an affordable housing resource, an energy-efficient, attractive pair of buildings that are going to enhance this community and help the revival of this waterfront.”

Nassau County also played a role, by helping to provide about $900,000 in loans and securing a $500,000 Brownfields Economic Development Initiative grant from the U.S. Department of Housing and Urban Development, according to County Executive Laura Curran. “Taking this area, a brownfield, toxic area and turning it into gorgeous housing is good for the community,” Curran said. “This project is a great example of how government can partner with the private sector to provide affordable places for people to live while delivering much-needed economic development for our communities. I look forward to continuing our revitalization efforts and attracting more investments into Glen Cove.”

“This is something that is desperately needed in Glen Cove,” Tenke said, noting that the area was one of the first to be settled in the city. “To know this is going to be developed into sustainable and affordable housing . . . I am so supportive, because I know it will be quality, and I also know the need [for affordable housing] is there. This is exactly the type of project the IDA wants to support.”

“We do have many residential projects that exist throughout the year, but . . . the IDA board truly felt that [this one] was needed based on its merits,” Ann S. Fangmann, executive director of the Glen Cove CDA and IDA, said. “I’m just so thrilled that the residents here will enjoy 28 acres of public amenities in their backyards, a vibrant downtown and everything else that Garvies Point has to offer.”

Joe Graziose, RXR’s executive vice president of residential development, explained that the waterfront project has an obligation to offer 10 percent of its 1,100 units as affordable housing, roughly 500 of which will be rental units. “Today we have 385 rentals in operation,” Graziose said. “Dave [Gallo] is going to be constructing 55, so with the 38 from our rentals, we’re already ahead of where we have to be, because it’s needed.”

To underscore his point, Graziose noted that the Village Square project that was completed last year had 14 affordable units, which attracted 250 applicants. “That gives you a sense of how much affordable homes are needed,” he said.

“We’ve celebrated many substantial milestones in the Garvies Point community throughout the past year,” Graziose said. “We completed all roadwork, making it easier for everyone in the surrounding areas to enjoy our local businesses, opened the popular dog park and children’s playground, and introduced more parkland and waterfront access to all residents of Glen Cove. It’s truly a community, and we look forward to welcoming more residents to join us.”