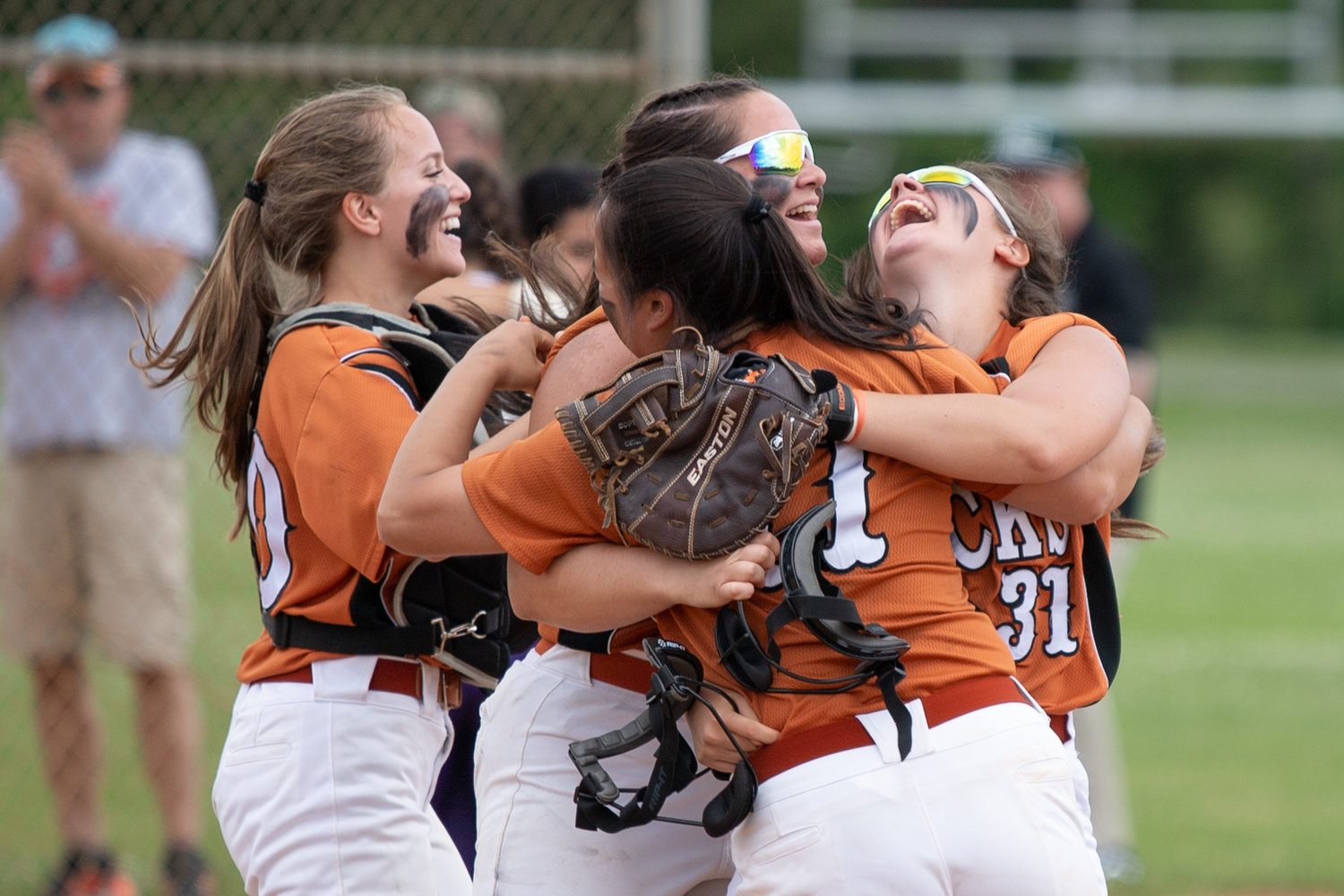 It's celebration time in East Rockaway after the Rocks took down Oyster Bay for the Nassau Class B softball championship.
Media Origin Inc./Herald
By Tony Bellissimo

Keeping with its theme all spring, East Rockaway opened the Nassau Class B softball best-of-3 finals last Friday against defending county champion Oyster Bay with its 17th come-from-behind win of the season.

In Game 2, the Rocks took a different approach and busted out to a rare early lead, scoring three runs in the top of the first inning on the way to completing a series sweep with a 9-5 victory at Mitchel Field. The last four-and-a-half innings were completed Sunday after a fast-moving storm brought torrential rain to the area Saturday and left the field in unplayable condition.

Seniors Mimi Bilardello and Adriana Ramirez, the table setters at the top of the lineup, both had two hits, two RBIs and two runs scored as East Rockaway (19-4) captured its 15th county crown in program history and 12th in the last 17 years under coach Joe Lores.

“It’s a great feeling,” Bilardello said. “We didn’t do well last season but most of the team returned. We’re a close-knit team and to play so well together and earn this is so great. When we beat Mineola in a back-and-forth game late in the regular season, I really felt we could go far.”

The Rocks, who took Game 1 against Oyster Bay last Friday, 13-1, will battle Babylon for the Long Island Class B crown on Thursday at 3 p.m. at Moriches Athletic Complex in Center Moriches.

East Rockaway sophomore Sofia Ramirez pitched all 12 innings in the series and had a 9-strikeout performance in last Friday’s Game 1 that ended a few innings early due to the mercy rule. She was cruising through five innings in Game 2 with a 9-1 lead when Oyster Bay finally got the bats going and scored four times in the bottom of the sixth on consecutive doubles by Kaitlyn Aasheim, Jackie Del Pozzo and Ciara Barefoot, and a two-run single by Anastasia Sakellis.

“Oyster Bay is a well-coached team with a lot of pride and that’s what I told our girls in the circle during the sixth inning,” Lores explained. “I just wanted to settle them down and said ‘get one out a time.’”

Sofia Ramirez said getting back to mixing up her pitches and keeping Oyster Bay’s hitters off-balance was key to closing it out. “I had to get my pitches off the plate more,” she said. “Once I did that, we got the outs we needed and held them off.”

Bilardello was instrumental in building the first-inning lead in Game 2, leading off with a single and scoring on Adriana Ramirez’s single for the first run. Senior Amanda Loyer drove in Ramirez and later scored on a wild pitch with two outs and it was 3-0 before Oyster Bay swung a bat.

The Rocks held a 4-0 lead and had runners on second and third in the top of the third when the skies opened up Saturday and the game was suspended due to weather. When it resumed Sunday morning, Bilardello stepped into the batter’s box with two outs and delivered a clutch two-run triple to make it 6-0. Adriana Ramirez and senior Riley O’Hagan followed with run-scoring hits and the cushion swelled to eight runs.

“Mimi’s hit was big because you want to be able to carry over the momentum from yesterday,” Lores said. “We doubled our lead with that five-spot and as it turned out, we needed it.”

In Game 1, the Rocks scored eight runs in the bottom of the fourth to break a 1-1 tie and take command. Junior Grace Wooding scored twice in the inning and also drove in a run. Senior Katy Howard capped the outburst with a two-run single.

“We’ve had a really good season and earned it,” Sofia Ramirez said. “We want to keep playing as long as possible.”