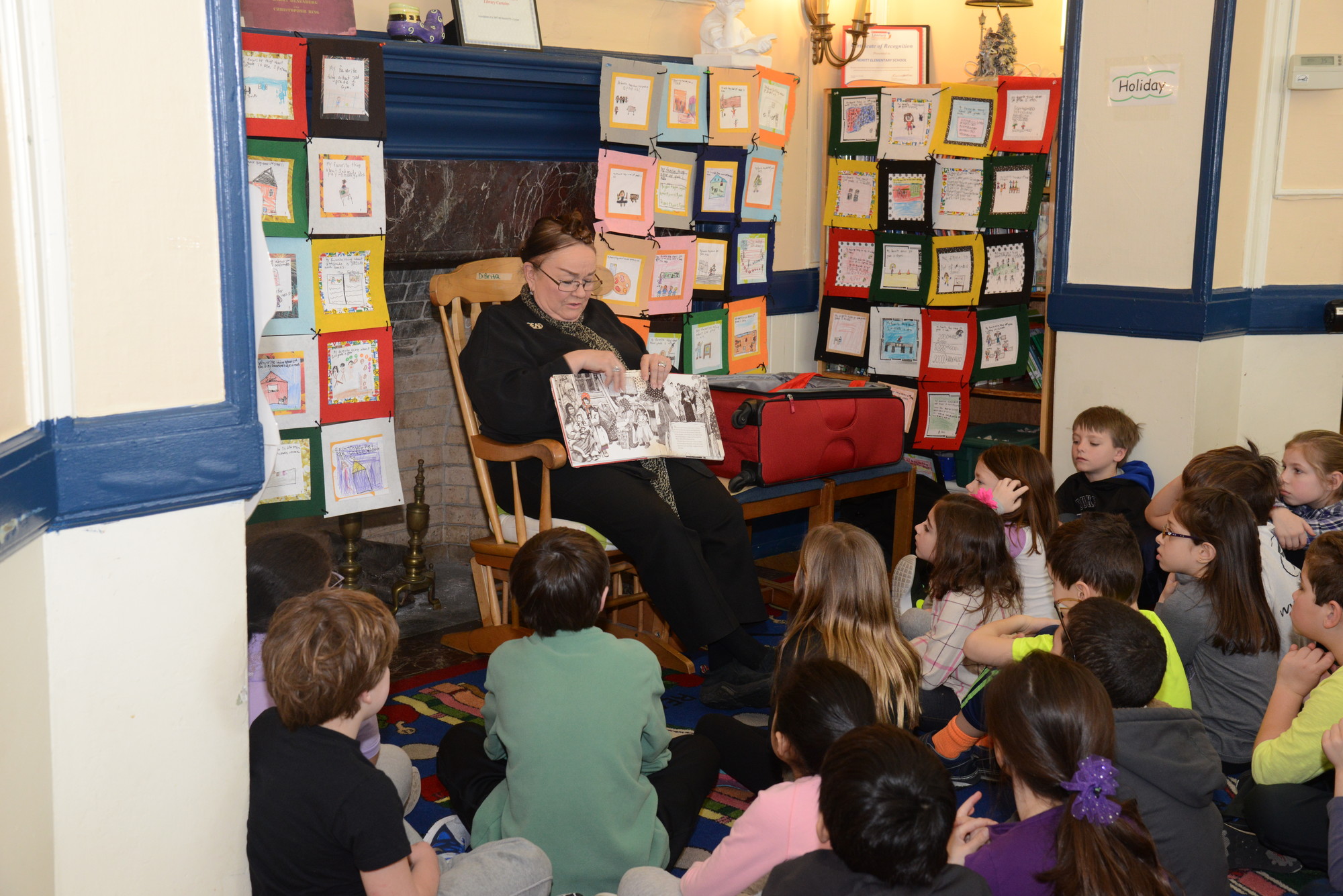 Author Patricia Polacco read one of her books to second graders at the Hewitt School last week.
Penny Frondelli/Herald 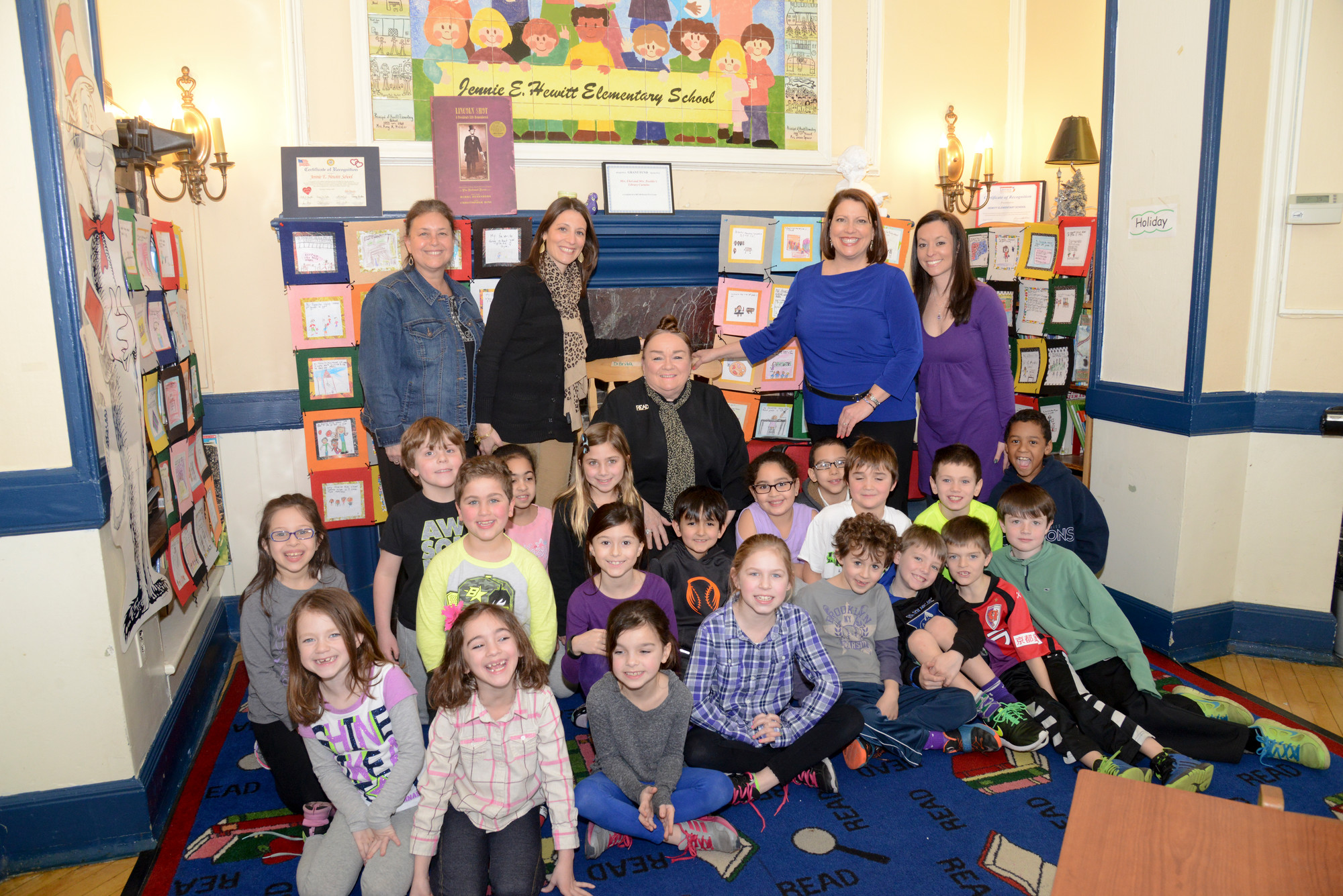 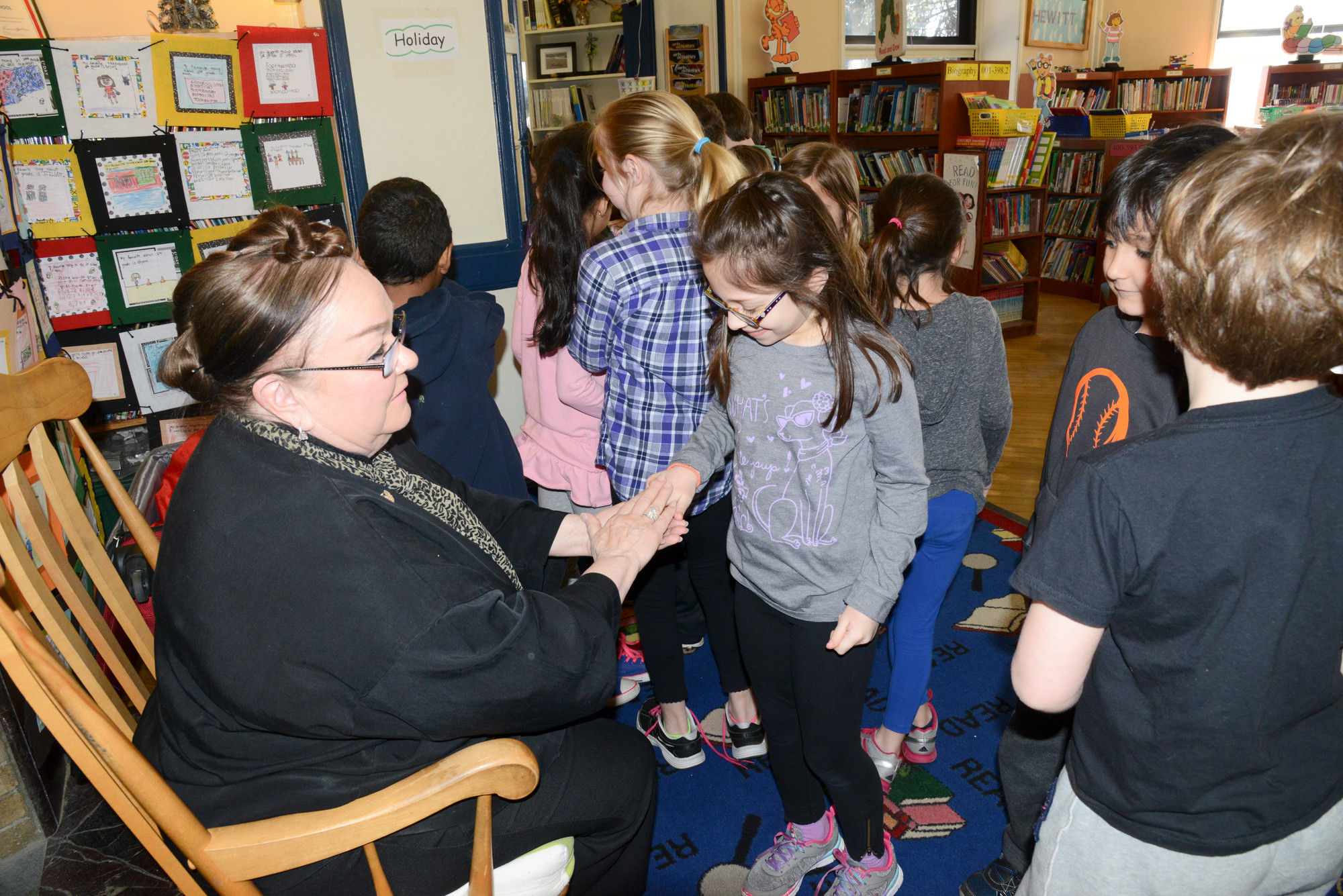 Patricia Polacco let second grader Marina ioannou touch a meteor that fell on the author’s farm when she was a girl.
Penny Frondelli/Herald
By Rebecca Melnitsky

Rockville Centre second graders got the visit of a lifetime when the famous children’s author Patricia Polacco read to every second grade class at all five elementary schools over the course of three days.

Polacco’s books, which are based on her own life and experiences, are part of the second grade curriculum. The Rockville Centre Education Foundation funded the grant that made the visit possible.

The children at Hewitt School certainly enjoyed the experience, as they (and the adults in the room) listened in rapt attention to Polacco, who brought a section of the meteor that landed on her family’s farm and a replica of her family’s quilt. These items are featured in her books “Meteor!” and “The Keeping Quilt.”

“We wanted to bring in authors that would be like a touchstone for the children on how they write books,” said Barbra Jay, the Hewitt teacher who wrote the grant for the district-wide visit. She said that in the program, children learn to “read like writers, write like readers.”

After Polacco read to the children, they were allowed to make a wish on the meteor. Polacco said they could not wish for money, to change other people or things that are bought with money — such as toys and video games.

Nevertheless, a child still asked if he could wish for video games.

“Now maybe you may end up designing and producing video games,” said Polacco. “But video games, I mean to me, I worry when kids watch so many of them because you need to get out and exercise. You need to live life for real.”

Other children wanted to wish for summer to come early, to be president and to be “cool at school but very nice.”

Polacco also told the children to be kind to others, especially children who have trouble in school. Polacco herself struggled with learning disabilities as a child and did not read until she was 14.

Unlike most Education Foundation grants, this visit had to had to be approved outside of a regular meeting. Jay said that normally Polacco’s school visits are booked two years in advance, but she noticed in December that Polacco had two weeks free in the New York area. Jay wrote the grant in early February, and the Education Foundation approved the grant on Valentine’s Day — via email, as many people were out on vacation.

“I was very proud of the group,” said Joel Ditchik, president of the Rockville Centre Education Foundation. “That we were able to respond as quickly as we did to afford the opportunity of a lifetime.” According to its website, the foundation has funded more than $60,000 in grants for the 2014-15 school year.