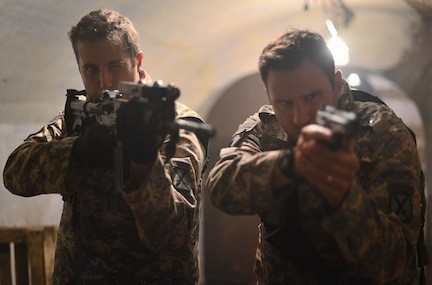 A scene from the compelling action film, "Cigarette Soup," which explores the struggles American soldiers face while serving in combat.
Courtesy Larry Strong
By Iris Wiener

If there is one thing Larry Strong is sure about, it’s that Hollywood is not the be all-end all location for success in the entertainment business. The accomplished filmmaker has tested the waters on both the east and west coasts, but continues to enjoy accolades from work he produces and directs on and around Long Island, a place that he holds close to his heart.

The story of an aspiring journalist (Joshua Wills) who joins a group of soldiers in Afghanistan to shed some light on the reality of their mission, “Cigarette Soup” is only one of many projects on Strong’s resume. In 2006 he co-wrote, co-produced and co-directed his first feature film, “Serial,” which featured “Dexter” star Lauren Velez, and went on to win Best Screenplay and Best Director awards at film festivals.

After garnering international attention for his co-direction of the viral video “I Got a Crush on Obama” (which has over 23 million views on YouTube), Strong saw more success as the producer of 2009’s “Last Day of Summer,” which featured DJ Qualls (“Road Trip”) and Nikki Reed (“Twilight”). He credits many of his achievements to his education and the support system for filmmakers on Long Island.

“If you want to make a film and you live on Long Island, it’s a lot easier to do now than when I first started,” says Strong. The Long Island University graduate didn’t purchase his first video camera until he was in college (“when I was young I wanted to be an astronaut, a comedian or a cartoonist,” he laughs), but now it would be difficult to find him without a camera nearby.

“I’ve shot in West Hempstead. Uniondale. Bellmore. In fact, the final scene in ‘Serial’ was shot at Merrick Cinemas,” he recalls of creating a chase scene, which even included a moment in the projection booth. “It was such a Long Island film. It was the first time we [he and frequent producing partner Kevin Arbouet] stayed so close to home for an entire film.”