U.S. should ‘work toward a world of shared prosperity’ 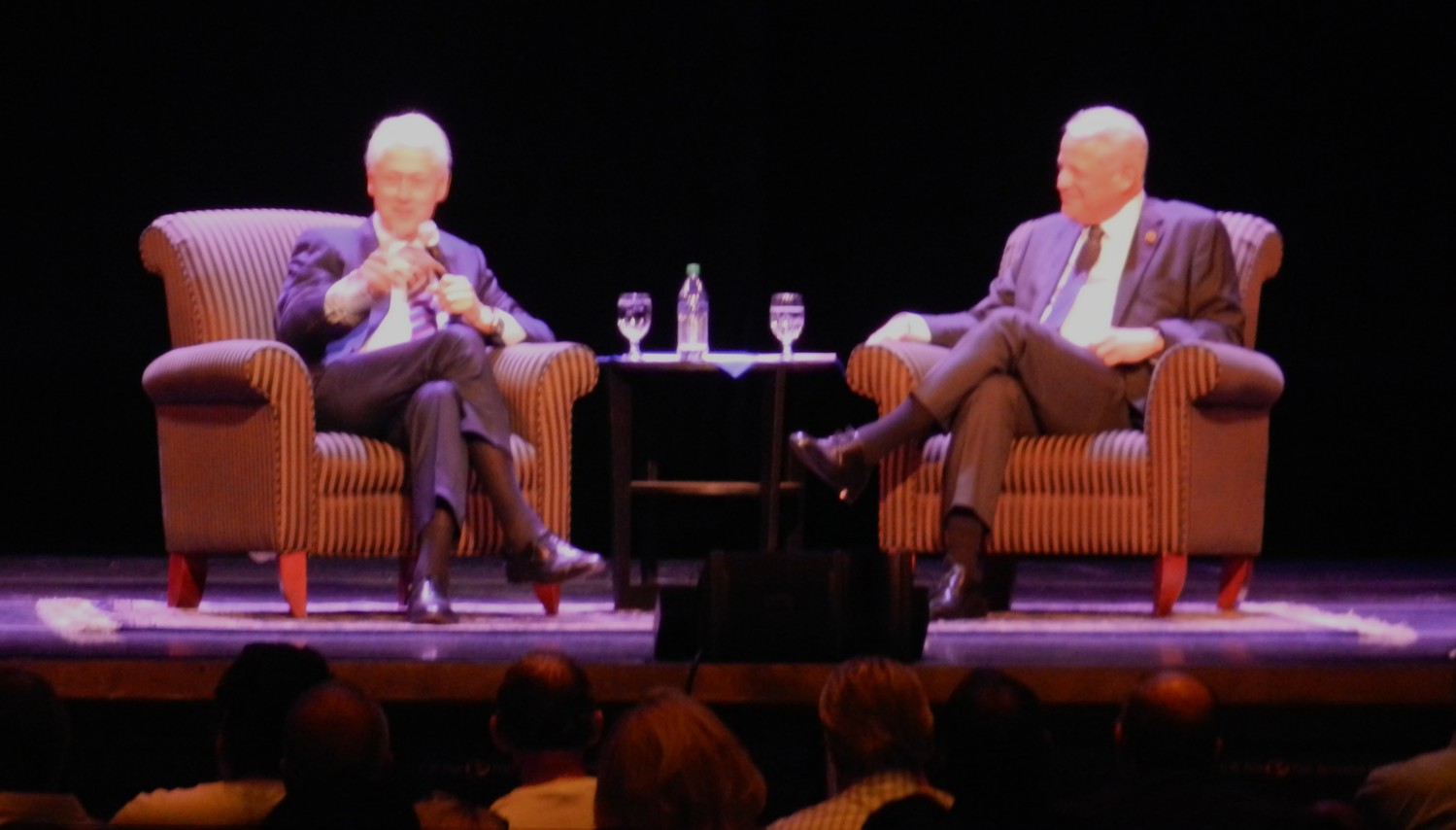 Former President Bill Clinton led a discussion on current events at the Tilles Center for the Performing Arts on Oct. 5 as part of Long Island University’s Global Institute program.

The program, founded earlier this year and chaired by former U.S. Rep. Steve Israel, offers the university community access to leaders of American government. Student-leader events, such as Clinton’s, are designed to facilitate discussions to broaden students’ understanding of global issues.

Clinton was introduced by LIU President Dr. Kimberly Cline, who described him as a model of outstanding service.

“He’s a remarkable, amazing speaker who’s intelligent and down to earth,” Cline said. “Our job as a university is to make the learning experience the best it can be for our students, and to have them listen to presidents and other government officials is astounding.”

Clinton began the evening by commenting on the current state of the world, using the acronym VUCA — Volatile, Uncertain, Complex and Ambiguous — created by the military, to describe conditions in Afghanistan and Iraq.

“The world we are living in is the political equivalent of chaos, and that’s because there have been disagreements over a framework,” he said. “It is the job of every citizen and country to maximize the positive forces of our interdependence so we can do better today.”

Clinton said that people relying on one another in diverse groups make better decisions than homogenous groups.

He referred to the Presidential Leadership Scholars program, which draws its resources from the presidential centers of Clinton, George W. Bush, George H.W. Bush and Lyndon B. Johnson to instill leadership in its scholars. The project selects 60 people from evenly divided demographics to deliberate current affairs and come up with ideas on how these situations could be handled.

Clinton remarked that having individuals from diverse backgrounds work through issues together would be an unprecedented feature of our government. “If those people made up two-thirds of our Congress, we’d be living in a different world,” he said.

He outlined other features of an ideal global framework, stressing that inclusivity was key. “We need to infuse into every decision the idea that differences don’t matter,” he said. “Being a more polarized America makes us no less interdependent, and we need to work towards a world of shared prosperity.”

Clinton closed the discussion with a nod to the Trump administration’s governance: “When you’re debating on whose resentment is more authentic, there’s no progress you can’t think when you’re mad, and there’s a lot to be said about thinking,” he said. “America should embrace its diversity and be a model for the rest of the world, because common humanity matters more.”

For the second portion of the night, Clinton sat down with Israel for a conversation about current global issues. The two discussed America’s relationship with North Korea and the nuclear crisis, as well as domestic gun violence and college affordability.

He called on the current administration to work with our allies to prevent nuclear war. He referenced the recent mass shooting in Las Vegas to discuss gun-control measures. Voters should use the ballot, he said, to demand change.

He said he believes that greater economic mobility — as was seen during his presidency — starts with reducing the debt for college graduates through grants, tax credits and direct-loan programs.

Zeynep Atabay, a sophomore studying business at LIU Post, was impressed by the former president’s talk. “Nowadays our ‘news’ is just opinions and arguments — we rarely look at facts and outcomes,” she said. “President Clinton didn’t bring opinions into the conversation; instead he shared some facts.”

“We are all capable of developing our own opinions,” she added, “so we should not be fed opinions. We need more facts, proof and numbers.”

Cline said that George W. Bush will visit the university next fall for the Global Institute.