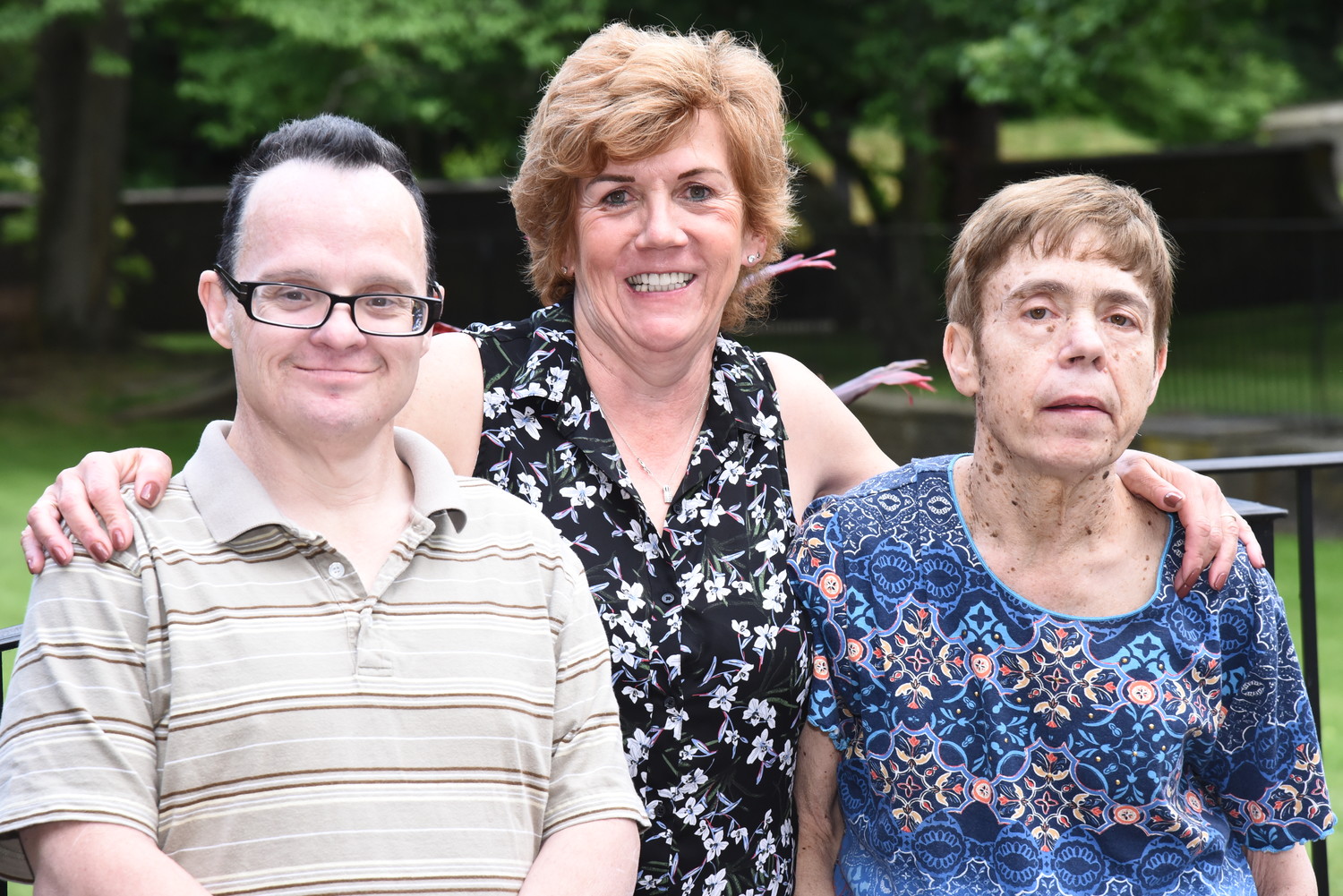 Friends of Billy Meyer, left, are dedicating their involvement in the Nassau County AHRC Walk on Oct. 14 to honoring his life. Meyer died on July 22, at age 51, after a battle with Stage 4 pancreatic cancer. Lynne Brewer, 58, center, was his community habilitation worker and is the legal guardian of her sister Diane Capitelli, 67.
COURTESY AHRC NASSAU
By Brian Stieglitz

Lynne Brewer noticed that her friend Billy Meyer had a particular talent: No matter where the two went or what they did, she said, he would make a friend.

Meyer, who had Down syndrome, shook hands with the first chainsaw-wielding clown the two encountered at the Schmidt’s Farm Haunted House in Melville. He sang on stage with Billy Joel band vocalist Mike Delguidice and his group Big Shot. He bonded with the horses at the North Shore Equestrian Center in Greenvale. And he drew smiles from his nurses at Melville’s Hospice Inn when he asked for a margarita night.

Meyer died on July 22, after a battle with Stage 4 pancreatic cancer. He was 51. Brewer plans to honor his memory on Oct. 14 in the Nassau County AHRC Walk, which spreads awareness for those with intellectual and developmental disabilities.

Brewer, 58, met Meyer in January 2017, at a cooking class that she hosted at AHRC Nassau, where she is a community relations liaison. She was inspired to get involved through her care for her 67-year-old sister Diane Capitelli, who also has a developmental disability.

Meyer’s doctors at NYU Winthrop Hospital in Mineola had told him that he had a serious illness, and he was looking for a community habilitation worker who would help him with daily activities, like eating healthy and interacting with others. Although Brewer had not intended to take on the role, she changed her plans when she learned of his cancer diagnosis. He had four months to live, doctors said.

“I decided we were going to do his bucket list,” Brewer said. She consulted Meyer’s stepfather, Michael O’Connor, and the two helped him come to terms with the fact that he was very sick and did not have much time left to live.

“It was a really hard conversation,” Brewer said, adding that many parents of adults with special needs try to protect them from such harsh realities. But Brewer said that she and O’Connor did not want to shelter Meyer from living his best possible life.

“We were very busy, and I think that’s what kept him alive,” Brewer said. “Each plan we made gave him a reason to keep fighting. And he fought hard.” The pair continued making plans for 16 months.

Brewer spoke about her friend last week at the AHRC Nassau’s East Meadow location, where participants worked on paintings for an upcoming art show as Ben E. King’s “Stand By Me” played in the background. “They all love music,” she said, adding that the first item on Meyer’s bucket list was to see a Billy Joel concert.

They began their journey by seeing the Joel cover band Big Shot and, after the show, they met front man Mike Delguidice. The singer, a member of Joel’s band, immediately became Meyer’s friend, Brewer said, inviting him onstage at succeeding shows and eventually securing tickets for the two to see Joel himself. “I can’t even describe how much Mike did for Billy [Meyer] and what it meant to him,” Brewer said.

When Meyer, Brewer and another friend went to the Schmidt’s Farm Haunted House last October, Billy enjoyed himself thoroughly, while Brewer hid behind him the whole time, clutching the back of his hooded sweatshirt.

Before his illness took a turn for the worse and he began hospice care, Brewer took Meyer horseback riding at the North Shore Equestrian Center, taught him to drive a car at RPM Raceway in Farmingdale, and took him to Pennsylvania’s Kalahari Water Park and on a family fishing trip. “He was a part of my family, and I was a part of his,” she said, adding that she still has dinner once a week with O’Connor, and the two reminisce about Meyer.

O’Connor said that parents of people with special needs must be flexible and involved in the lifestyle their child wants to lead. “It’s not easy,” he said. “But in the end, the child learns teamwork, friendship, confidence, trust of others and has a better understanding of life.”

While he was being cared for at the Hospice Inn, Meyer craved margaritas, Brewer said, so she and O’Connor held a makeshift taco night by his bedside. His nurses said that it was the most cheerful they had ever seen someone at the center.

Eventually, O’Connor and Brewer decided to discontinue Meyer’s radiation and chemotherapy because, she said, she saw the toll it was taking on him and “we wanted him to die living instead of live to die.”

He was restricted to a liquid diet, but on one of his last days, he wanted a cheeseburger and milkshake. Brewer treated him, and after finishing the meal, she said, “He closed his eyes to sleep and never woke up.”

Officer Dave Kohrumel, of the Nassau County Police Department, who also knew Meyer, brought the Mounted Police squad’s horses to his funeral procession. Kohrumel recalled attending a Rangers game with Billy and Brewer, at which he bought Meyer a pretzel. “He asked if he could give me a hug to thank me,” Kohrumel said. “That hug was priceless.”

Brewer said she would spend Oct. 14 looking back on her memories and sharing them with Meyer’s friends at the walk. “My life has been crazy since July 22, and I really miss my buddy,” she said through tears, adding that she hopes to continue supporting and caring for people like him.