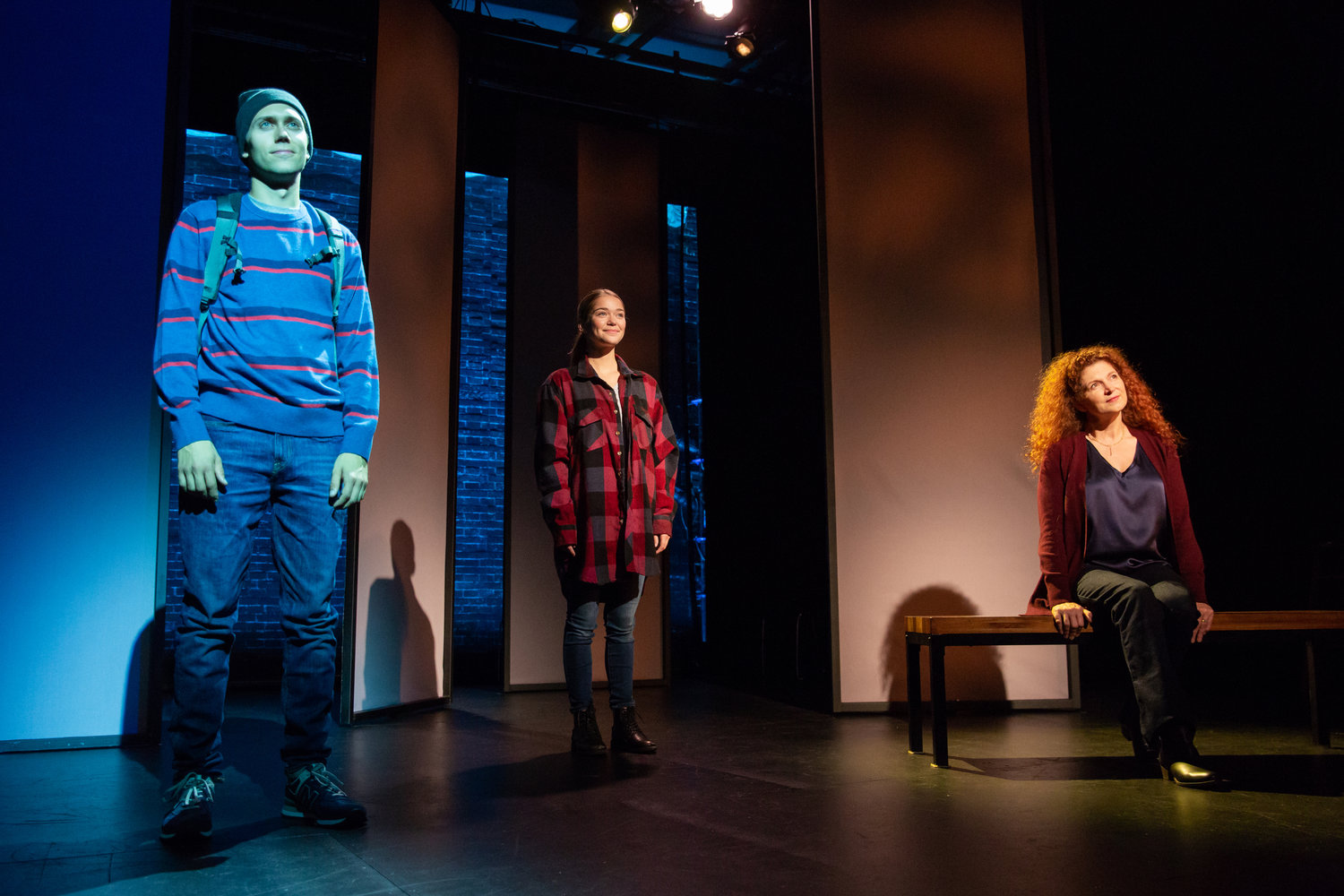 Connor Lawrence (left to right), Kelly Swint and Tawni O’Dell in a scene from “When It Happens To You.”
Courtesy Jeremy Daniel
By Iris Wiener

Lynne Taylor-Corbett has danced with the Alvin Ailey Dance Theater, choreographed for Mikhail Baryshnikov, earned Tony nominations for her direction and choreography of the musical “Swing!,” and created iconic dance for films such as “Footloose” and “My Blue Heaven.” Now she has turned her attention Off-Broadway, with “When It Happens To You.’” It’s a theatrical memoir she co-conceived and directed with author Tawni O’Dell, shedding light on O’Dell’s struggle to help her family after her daughter was assaulted.
Although Taylor-Corbett’s list of credits is endless and her many hats (as a writer, choreographer, performer and director) are remarkably intriguing, one of Taylor-Corbett’s favorite titles is actually “Long Islander.”
Her road to Long Island — specifically Rockville Centre — began in Denver, Colo.; Taylor-Corbett first moved to New York to attend School of American Ballet at age 17. Her dance career took off soon after, leading to choreography for the New York City Ballet and a slew of credits both on and off Broadway.
“I enjoy choreography so much,” she says. “I haven’t stopped, but directing became my life 15 years ago and then an outgrowth of that is writing.”
Taylor-Corbett made her way to Rockville Centre when she married her ex-husband. “I found the most wonderful contrast between working in the city and being able to be in Rockville Centre with trees and soccer games and that kind of other life. I’m glad I didn’t miss out on that.”


A flair for entertainment runs in the family; her son Shaun, who starred in Broadway’s “In the Heights,” frequently collaborates with his mother on projects. He was raised in Rockville Centre, which she says was great for a young man with “slightly brown skin.”
“It’s a very mixed neighborhood, not exclusively any race or religion,” she says, now having been a resident for more than 25 years. “It is cosmopolitan in its own way. This is it for me, I wouldn’t move away from Rockville Centre for the world!”
Taylor-Corbett does much of her work from the Allegria Hotel lobby in Long Beach, where she enjoys looking at the ocean while writing. “They have a bar, a fireplace, a restaurant,” she says of her go-to spot. “It’s a really neat destination.”
Such tranquil locales help Taylor-Corbett tackle intense, profound pieces such as “When It Happens To You.” The project first came to her by way of producer Mitchell Maxwell, who told Taylor-Corbett that he thought O’Dell’s memoir would make an interesting play.
“We weren’t friends before working on this, so it took a long time for her to really trust me,” Taylor-Corbett says of the process in creating the play, which chronicles O’Dell’s experience in receiving the news of her daughter’s attack five years ago and its subsequent effects on her family.
O’Dell makes no qualms about the fact that she is not an actress; in fact, it is the first thing she tells her audiences nightly upon crossing the stage and introducing herself. Although she is a public speaker (having traveled the country for book tours celebrating her novels), she has never performed in a play. Taylor-Corbett says that O’Dell’s lack of experience only made her job as a director more interesting.
“[O’Dell] has a raconteur’s flair,” says Taylor-Corbett. “She reveals her personality, and she’s one of those people that can pull humor out of exasperation. There are quite a lot of laughs in the show.”
So much about the show surprised her, but she says that she is devoted to stories like it. “It shows how there’s no rule book or support system that works for everybody following trauma. People have to figure it out. There’s a tendency to spiral and that’s what happened to this family.” “Out of that, Tawni first wrote a book, and her writing of it began to help her communicate with her daughter. She processed her story for years, and now she walks you through it. People relate to her. She’s a poetic writer, so the show is a unique experience.”
Although Taylor-Corbett most often gets questioned about her experience working on “Footloose” (“When I first read that script I said to [writer] Dean [Pitchford], ‘I don’t know that anyone’s going to buy this.’ Can you imagine?”) she notes that she currently seeks projects that feel evocative and important. Next up she’ll be working on a showcase of “Victory Train,” a Vietnam era musical written by two veterans.
She’ll also continue to develop and fine-tune “Distant Thunder,” a musical on which she collaborated with Shaun, touching on what it means to be Native American in the United States. It opens at the Lyric Theatre of Oklahoma next year. For now, Taylor-Corbett is excited to continue to experience “When It Happens To You” through new audiences’ eyes. “It’s a story I love telling and I hope people like it.”
“When It Happens To You” runs through Nov. 10 at The Sheen Center for Thought & Culture in Manhattan. Tickets are available at WhenItHappensPlay.com or by calling (212) 925-2812.