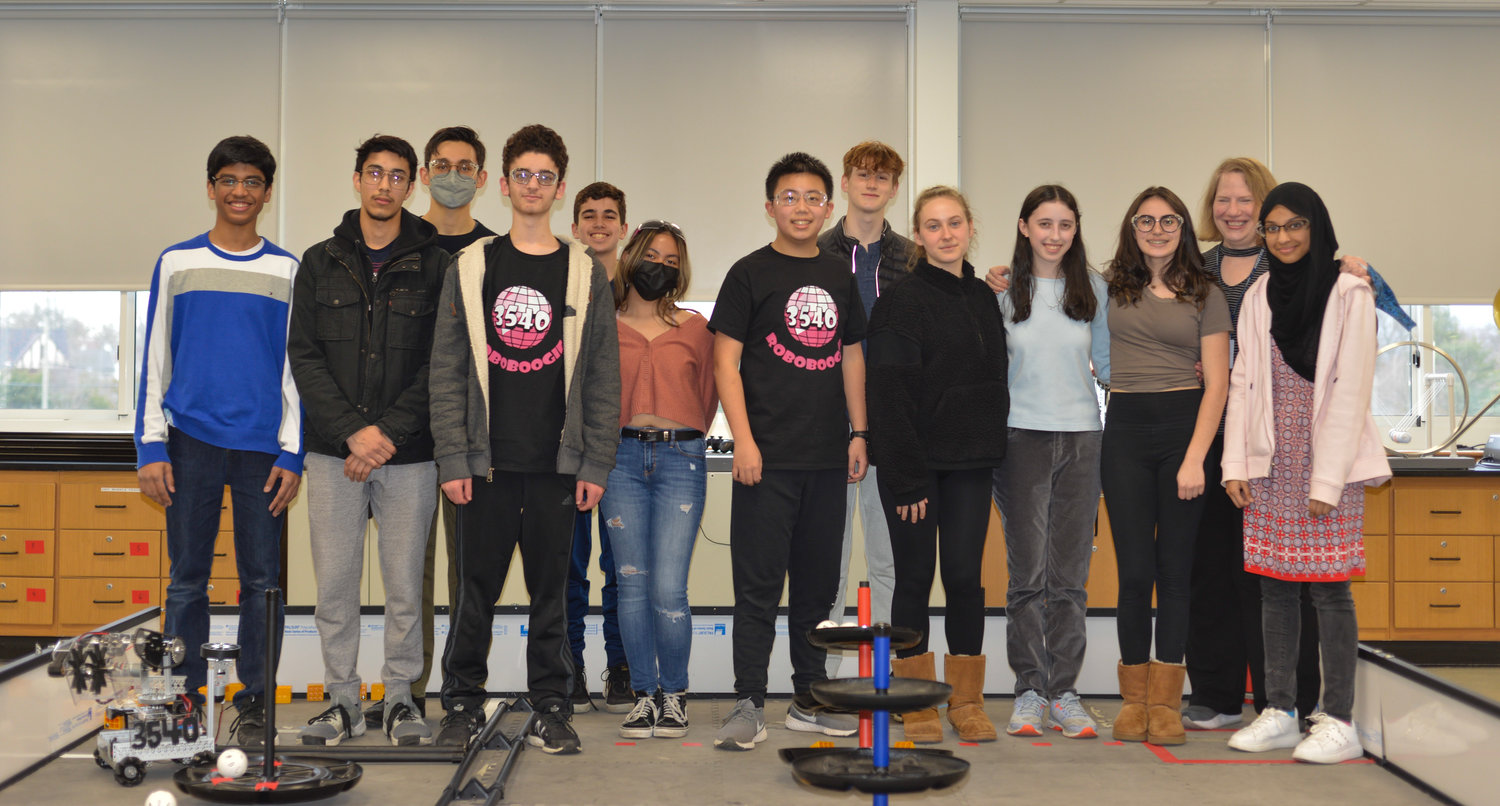 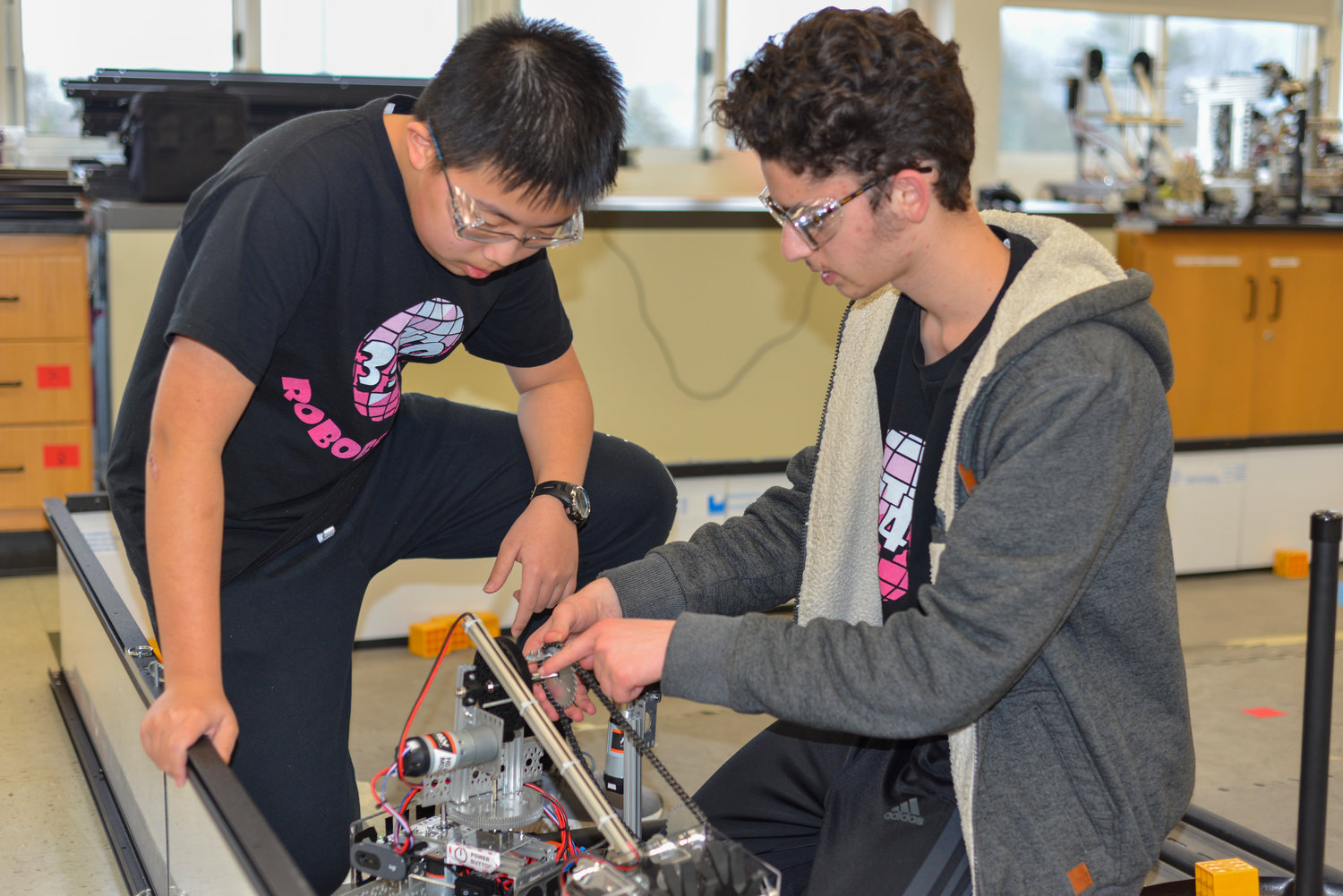 Brian Chen and Ethan Abelev, both juniors, worked on their team’s robot.
Steven Keehner/Herald
Previous Next
By Steven Keehner

On Fridays, when the last bell sounds at 2:56 p.m., most Hewlett High School students celebrate the end of the school week. Members of the school’s Robotics Club, however,‌ know that their day is far from over.

Club members first make space in a science classroom, and then they unload their equipment. By 3:15, Room 234 has been transformed into a robotics laboratory. For the next six hours, roughly 60 students will be busy here, and in the adjacent hallway.

“These kids basically do an 11th class, but they do it all on Friday night,” said Janine Torresson, the Robotics Club coach. “They put in more hours than if they took an engineering class, and they do it on their own time.”

Robotics’ construction and practice season begins in the fall. Winter is the qualification season, when the state and regional finals take place, in anticipation of April’s world championships.

The reality of their triumphant journey still surprises RoboBoogie team members. “We were joking about winning, like, ‘Oh yeah, we’re going to Texas,’ and I’m not even kidding,” junior co-captain Addison Star said. “I couldn’t believe it. I was expecting Ms. T to get a call saying something like, ‘Oops, sorry, wrong team.’”

Work begins in September. The team raised money, reached out to the STEM-oriented businesses for mentors and designed an industrial-sized robot to take on specified tasks while following detailed restrictions. Qualifier competitions take place in January and February. The regionals are in March.

The squad’s other co-captain, senior Alice Fried, explained how the team planned more than usual before settling on an idea this year.

“That first idea usually isn’t the one that we end with,” she said. “We have many renditions — this is like the third or fourth one.”

Last year’s team could not compete because of the coronavirus pandemic. As a result, team members have given it their all this year, with every member of the RoboBoogie crew pitching in on construction, programming, designing and outreach.

Lily Cohen, a junior and the club’s business and outreach manager, stressed that the community aspect of its work is crucial. “We want to get the kids of the community excited just the way many people here were when they were younger,” Cohen said.

Nonetheless, their purpose remains the same: gracious professionalism. That is one of the values FIRST promotes among robotics competitors, and RoboBoogie members have taken it to heart.

“It’s good to recognize that you’re competing,” Ethan Abelev, a junior and a team engineer, said. “But the goal here is to ultimately grow together as an engineering, coding and outreach community.”

Torresson, who is in her sixth year as a coach, said it is rewarding to see her students not only apply what they have learned in class to their work, but also to discover a passion.

“I don’t even have the right word to describe how it feels to be a part of their journey,” she said. “‘Amazing’ is the only word I can think of.”