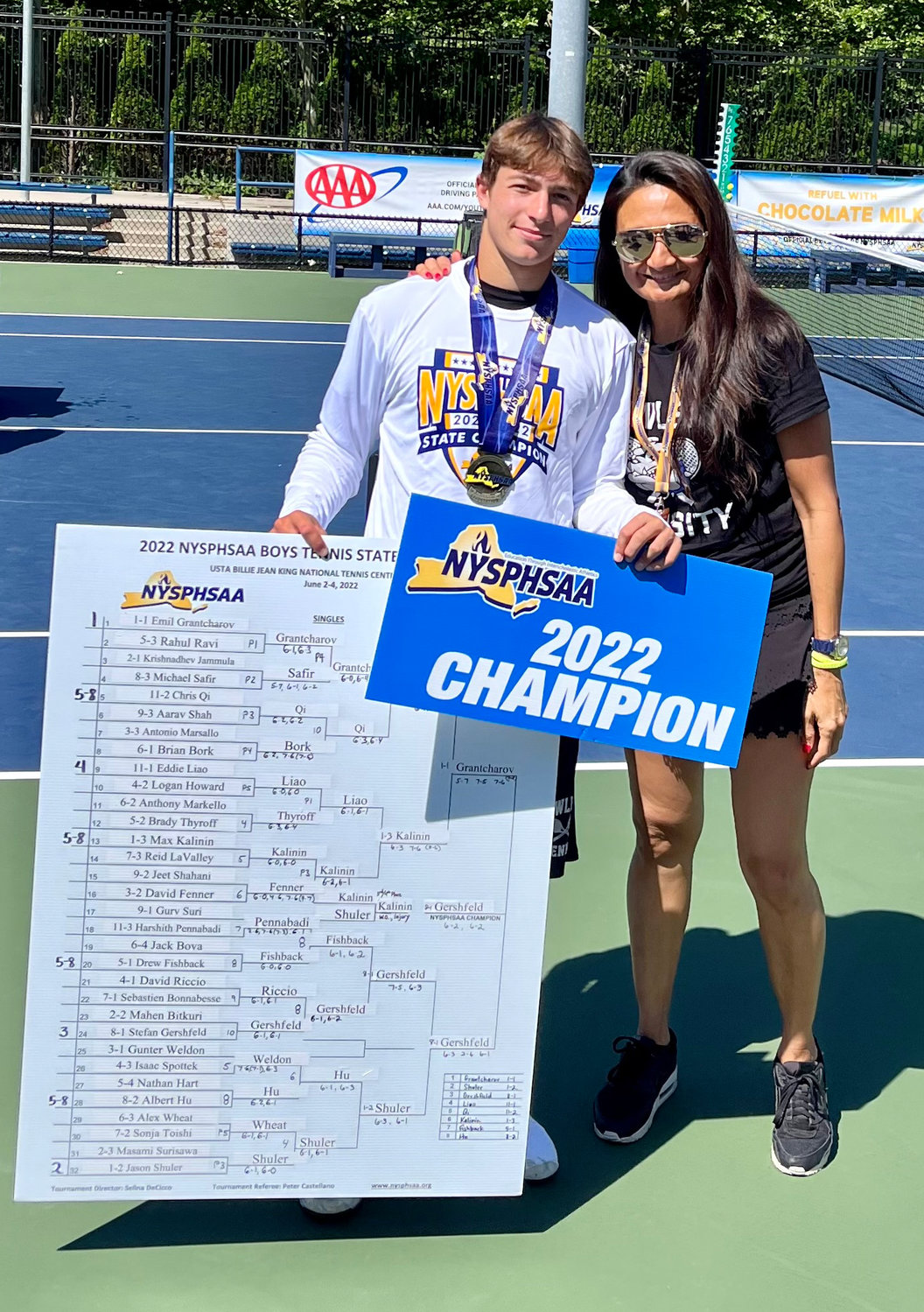 Stephan Gershfeld’s dream finally came true.
The Hewlett junior capped off one of most dominant tennis seasons in school history and became the first male Bulldog in 31 years to win a state singles title after defeating top-seeded Emil Grantcharov of New Rochelle 6-2, 6-2 at the New York State Public High School individual championships in Queens last Saturday.
Gershfeld has not lost a match in two straight high school seasons entering the tournament and didn’t even drop a set during that time. Last year’s state tourney was canceled because of Covid-19.
“This is definitely one of the biggest achievements that I’ve reached in my life,” he said. “Ever since seventh grade, this is the one thing that I’ve been wanting to do and this was definitely the goal and the reason I play high school tennis.”
The third-seeded Gershfeld defeated Mahan Bitkuri of Schenectady 6-1, 6-1 in the first round before posting a 6-1, 6-2 victory over Ithaca’s David Riccio later that day to reach the quarterfinals.


Gershfeld would gain All-American status if he won the next match the following day, and admitted that was on his mind when he fell behind 4-0 to freshman Drew Fishback of Geneva and 40-15 in the fifth game of the first set. But Fishback began to struggle and Gershfeld took advantage to tie it at 4 before going on to a 7-5 victory. He advanced with a 6-3 win in the second set.
Next was Scarsdale’s Jason Shuler, who won all seven previous matches between the two. Gershfeld won the first set 6-3, but struggled to return Shuler’s serve in the second and lost 6-2.
“After he lost that second set, he took a break and I said, ‘New set. We’re starting all over and forget about the second set. Let’s move on.’ And that’s all I kept saying to him,” Hewlett coach Joyce Raikos said.
Gershfeld did forget it and won the last set 6-1 for a trip to the final. There, he faced Grantcharov, whom he split eight meetings with since they first competed as 10-year olds.
Grantcharov took a 30-0 lead in the first game, but that was as much offense as he could muster as Gershfeld maintained long rallies and forced errors for a 6-2 win. Gershfeld won the first set and rallied to go ahead 3-2 before a crucial moment in the sixth game occurred.
Grantcharov took a 40-15 lead, but Gershfeld rebounded and forced a deuce. Gershfeld took four separate leads, only to have Grantcharov tie it each time. The pair continued to battle until Gershfeld won the 15th and 16th points and the game.
“It was a grueling 10–15-minute game,” Gershfeld said. “But I ended up pulling through, which helped me a lot.”
Gershfeld took the last two games and won the title by hitting a forehand that landed inside the baseline.
“I think I was more excited than he was,” Raikos said. “When he came off the court, I grabbed him and gave him the biggest hug I was so excited.”