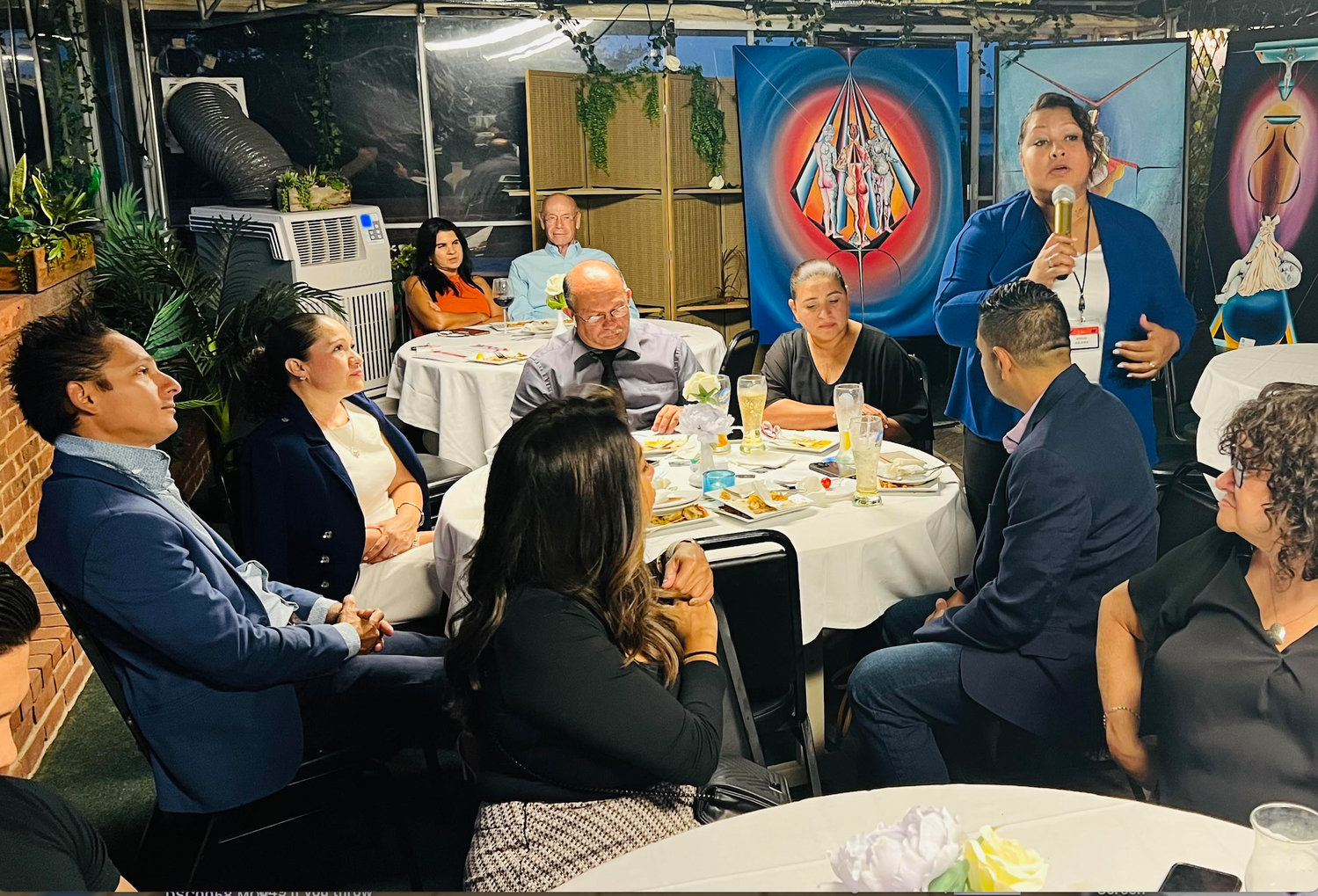 Before they were invited to dance to traditional Hispanic and Latino music, new chamber members like Angie Najera introduced themselves and their businesses.
Roksana Amid/Herald 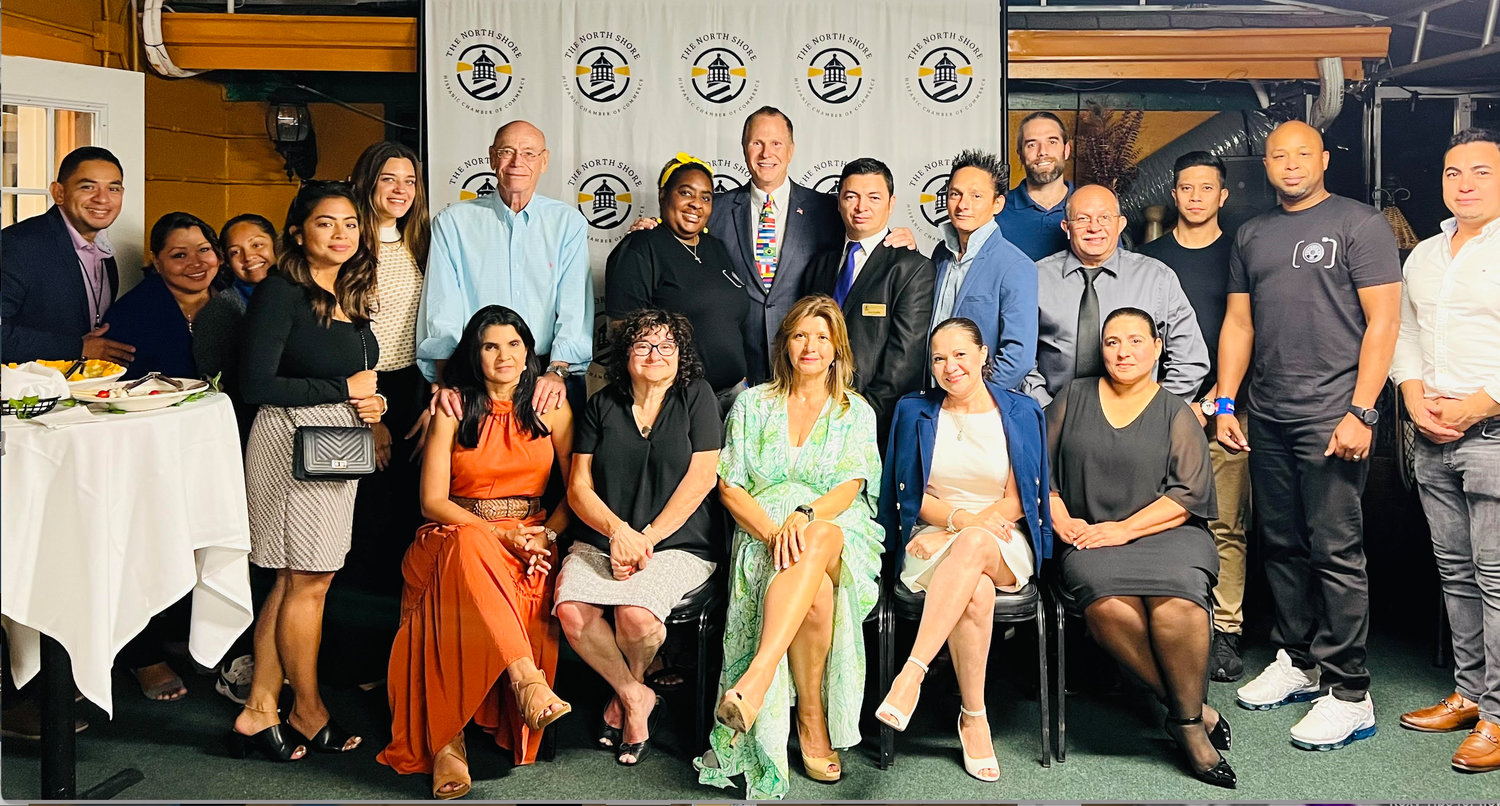 The Hispanic Chamber of Commerce celebrated Hispanic Heritage Month by welcoming new members, who are networking to establish stronger relationships in the North Shore community.
Roksana Amid/Herald
Previous Next
By Roksana Amid

the national anthems of countries that had gained their independence and encouraged attendees to dance to diverse traditional Latin and Hispanic songs.

The Hispanic Chamber serves and connects the Hispanic community while helping small businesses and to empower the economy of Hispanic businesses on Long Island’s North Shore.

Padilla, a native of El Salvador, formed a Hispanic chamber when he discovered that Glen Cove’s Latino population had increased by more than 25 percent since 2010, according to the United States Census Bureau.

There were businesses operated by, or catering to immigrants, but Padilla found language and cultural differences created a barrier between business owners and the usual resources and organizations that were supposed to help them. He decided a Hispanic Chamber of Commerce would appeal to those businesses and connect them with the help they needed.

Padilla said that since the creation of the Hispanic chamber, organizations like the Gold Coast Business Association, the Kiwanis Club and the Glen Cove Chamber of Commerce have reached out to the Hispanic chamber to collaborate on projects such as food drives.

“I think right now we are in the best position we have ever been in as a Spanish community because we are integrated with the English-speaking community,” said   Padilla.

National Hispanic Heritage Month is celebrated from Sept. 15 through Oct. 15 recognizing the contributions and influences of Hispanic Americans to the history, culture, and achievements of the United States. The month also celebrates Costa Rica, El Salvador, Guatemala, Honduras, and Nicaragua, who all gained their independence on Sept. 15.

For many new members like Huntington resident Jasmine Rivero, this was the first-time networking with business owners on the North Shore. Rivero, owner of Creative Enrichment Services, came to the Hispanic Chamber of Commerce to meet professionals so that she can assist students who are struggling in the community.

Rivero’s business serves as an academic resource and success program for Spanish-speaking students. Rivero, a first-generation Cuban on her father’s side, understands the struggles many students face. Her grandfather was removed from school for behavioral issues and a lack of resources.

Her experience as a former bilingual kindergarten teacher at Glen Cove’s Deasy Elementary led to the creation of her 10-week program, which focuses on providing Spanish speaking students with the tools they need to reach personal and academic goals. It helps students become more active in their communities, and helps to find non-academic alternatives after high school if needed.

“Academics are important, but the kids who don’t want to go to college, the ones where school isn’t working out for them, they’re building community relationships and getting internships in trade,” Rivero said.

She wants students to have a clear path after graduation, and be part of businesses in their own communities.

“Our vision is to serve between corporations and communities to help organize grants and fundraisers,” Johnnie said.

Wings of Hope which incorporated this year, hosted a back-to-school backpack giveaway on Aug. 28, where more than 450 backpacks were distributed to students in need.