Every dollar given to helping organizations returned twofold 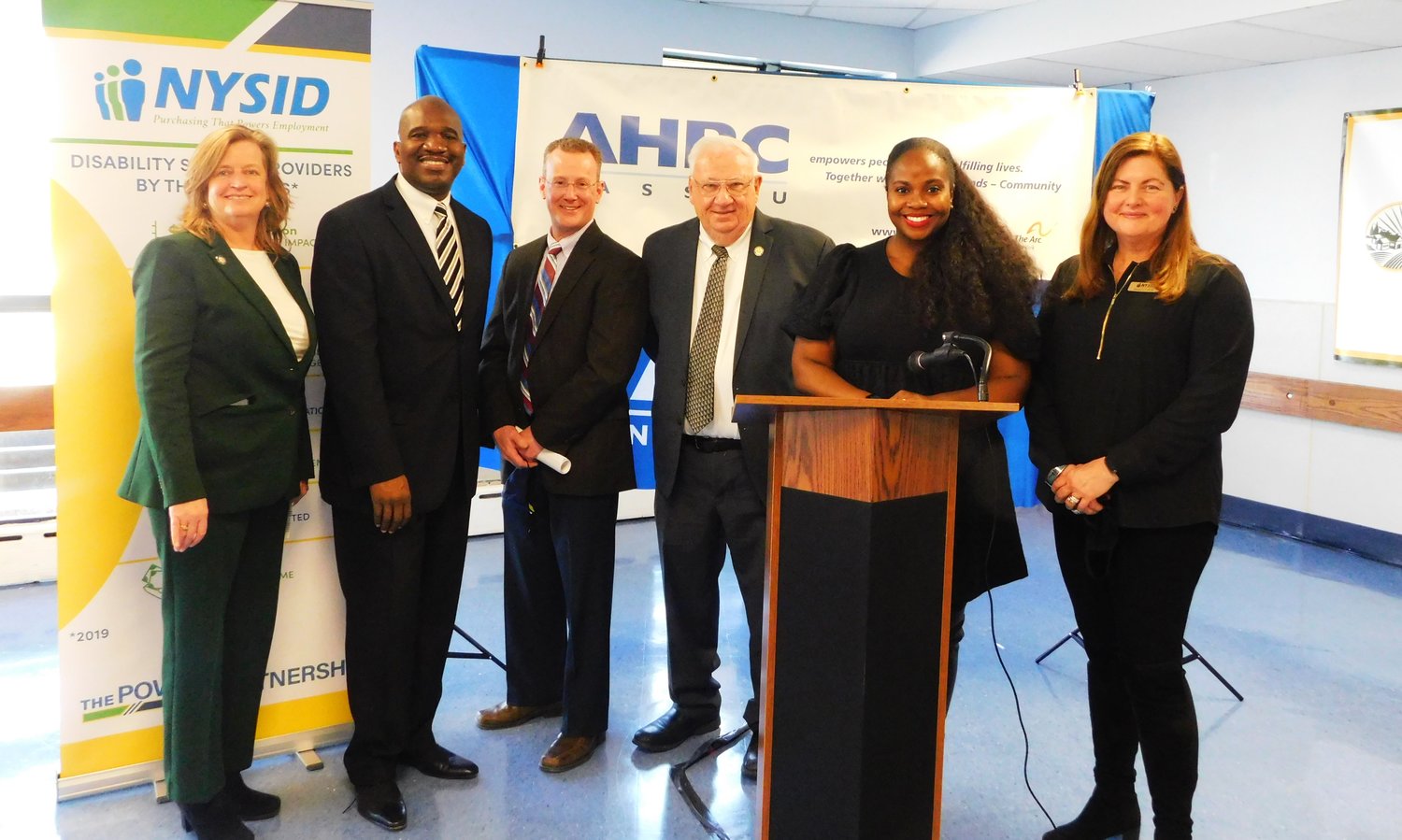 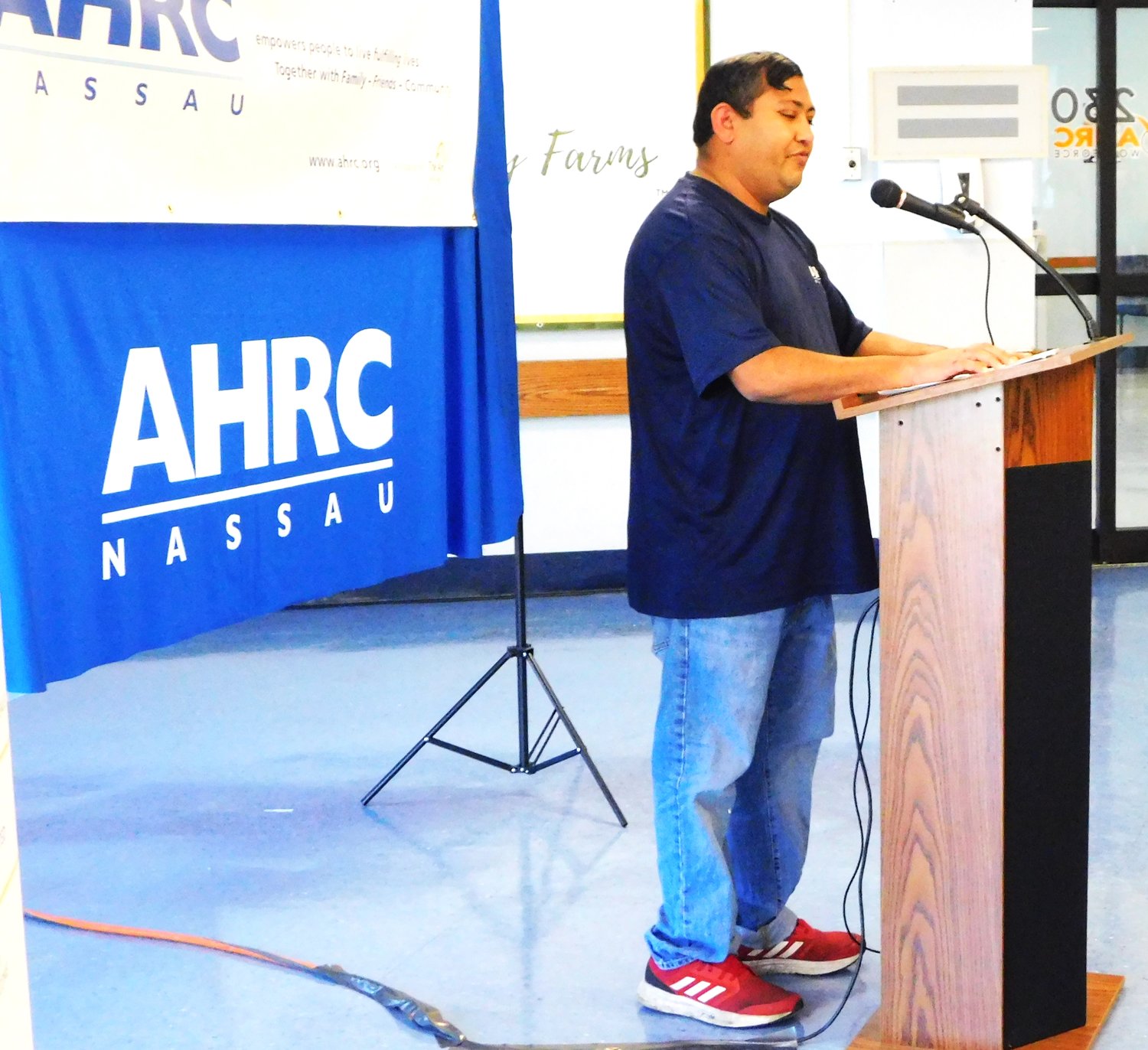 Abrar Butt testified to the importance of the services provided to him by AHRC Nassau.
Reine Bethany/Herald
Previous Next
What is AHRC Nassau?

According to spokesperson Mary McNamara, director of Community Resources, AHRC Nassau is a nonprofit organization started by parents of children with disabilities in 1949.

“Parents had no options, no opportunities, there was nothing for their child who had a disability to do,” McNamara said. “There was no right to an education, none of those things existed for their children. So they built them.”

AHRC was an acronym for the Association for the Help of Retarded Children. Across the last seven decades, as societal understanding of disability has improved, the term “retarded” has fallen out of use, but the acronym become so strongly associated with the organization that it has been retained in the organization title.

AHRC Nassau provides opportunities and choices for people of all ages with intellectual and developmental disabilities (IDD) throughout Nassau County.

The report recommends new legislation that would simplify the process for approving Preferred Source contracts, and would also lower the disabled ratio required on a given contract that must be performed by people with disabilities from 75 percent to 50 percent. The Preferred Source program directs state and local government agencies to purchase pre-approved products and services that are on the Office of General Services Preferred Source List.

The remarkable boost to New York State’s economy that results from providing services for the disabled was the topic of a news conference in Freeport on Feb. 10.

Officials of the New York State Legislature and disability services leaders gathered at the AHRC Nassau Freeport Work Center at 230 Hanse Ave., which has been a training and employment center for individuals with intellectual and developmental disabilities for half a century.

The conference’s purpose was to call attention to a December report released by The Rockefeller Institute entitled, “The Role of Disability Service Providers in the New York State Economy.” The report showed the positive economic impacts of both the Preferred Source program – a model for ensuring people with disabilities have employment opportunities – and the larger nonprofit service delivery system for New Yorkers with disabilities that is supported through the State Office for People with Developmental Disabilities.

Maureen O'Brien, president and CEO of New York State Industries for the Disabled, opened the conference, saying, “The Rockefeller Institute report puts hard numbers to what we've been saying for years – that when people with disabilities have jobs, our entire state benefits.”

O’Brien introduced Assemblywoman Taylor Darling (D-Hempstead), who represents the 18th Assembly District. “It is such an honor to be one of the founding members of the first People with Disabilities Committee in New York,” Darling said. “That was long overdue.”

Assemblywoman Judy Griffin (D-Rockville Centre) said she is co-sponsoring a bill to establish a for-business tax credit for the employment of people with a disability, adding that the bill has bipartisan support. “Now when businesses employ people with disabilities,” Griffin said, “not only will they benefit from having those people in their employment, but they’ll also get a tax credit.”

State Sen. John Brooks (D-Seaford) spoke movingly of his cousin, whose mother served as an official in the AHRC, and also of his own employees. “I ran an insurance company a number of years back,” Brooks said, “and one of the things we did is, all of our large mailings were stuffed by people who would qualify to be here. … Sometimes we lose sight of the fact that all of them, every single one of them, is a person. They want to be happy and feel important, to be part of something.”

“The report identifies $6.7 billion of revenue that goes to the organizations that generates a total of $14.3 billion of economic activity, or did so in 2019,” Seereiter said. That is, each tax dollar spent on the organizations that serve people with disabilities adds more than two dollars of benefit into New York State’s economy, between the money generated from the businesses that employ people with disabilities, the dollars spent by the employees in their own communities, and the federal and state taxes that both employers and employees pay..

Stanfort J. Perry, executive director of AHRC Nassau, pointed out that the organization not only helps people with disabilities find work, it employs them in its own business lines. One business line is Wheatley Farms, whose catering services are run from the Freeport Work Center.

“Wheatley Farms Culinary and Catering Services provides high-quality catering to business, corporations and individuals for breakfast, lunch and dinner and special events,” Perry said. “We are also the brand that provides high-quality landscaping throughout Long Island, in addition to operating a one-hundred-year-old greenhouse that supplies some of the most beautiful floral arrangements, bushes and shrubs that I have ever seen.”

Two of the Freeport Work Center’s successful employees also spoke. Cathy Loquercio, the Work Center receptionist, was just elected to be the new Nassau County Representative for SANYS, effective  January 2022. SANYS is the Self-Advocacy Association of New York State. “I go to Albany and I speak up for people who can’t speak up for themselves,” Loquercio said.

Abrar Butt, who immigrated from Pakistan in 2012 and became a naturalized U.S. citizen in 2021, said, “AHRC, they helped me to find a job opportunity. … I was able to get married because of this AHRC company. I was able to bring my wife here to America. I have a daughter now.”