It’s not summer without the swim team 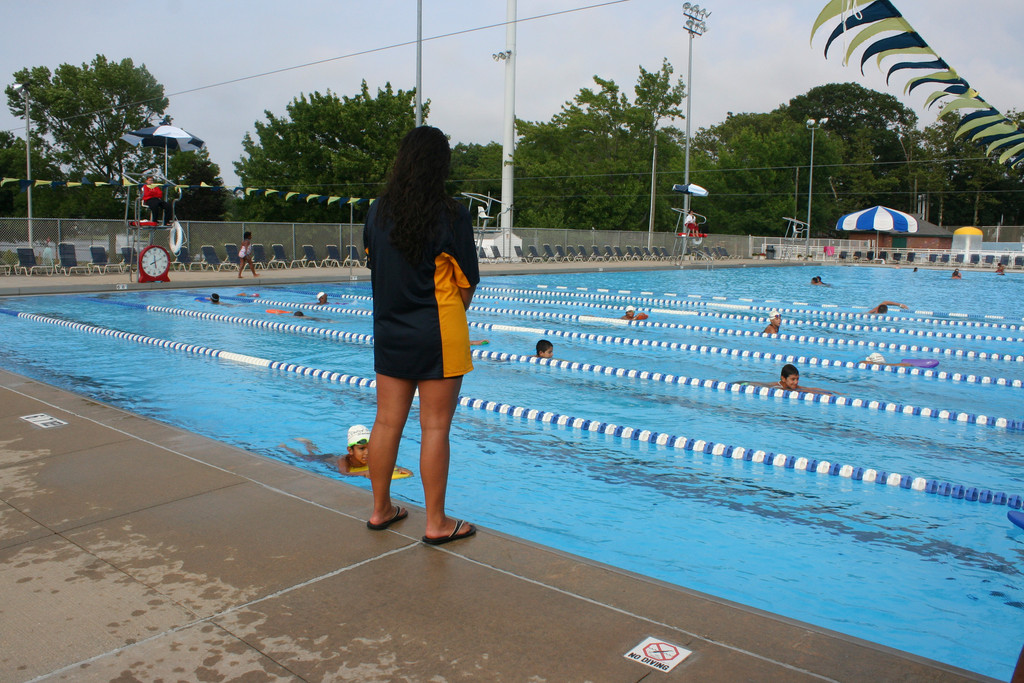 Assistant Coach Sarah Robertson watches the younger group of swimmers during the 5- to 10-year-olds practice at the Hendrickson Park pool complex in Valley Stream.
Laura Cerrone/Herald
By Laura Cerrone

Jon Logan sits on a starting block at the end of a lane at the Hendrickson Park pool. In front of him, a gaggle of 5- to 10-year-olds are seen only by their white swimming caps and thrashing arms and legs as they practice for their next swim meet.

Logan has been swimming with the Valley Stream Swim Team since he was 10. Now 15, he has one more year left to complete his goals of swimming in under 49 seconds for freestyle, and breaking a minute for the 100-yard butterfly.

Logan was part of the team last year, which won the Division 2 Championship, bumping the team up to compete in Division 1 this year.

“This year we expected to get royally massacred, but we are holding our own, head coach George Amitrano said. “We recently beat Hempstead, which we haven’t done in 30 years.”

Amitrano does not manage the 140 swimmers by himself. He has Samantha O’Brien for the swimmers 8 and under, Sarah Robertson for 9- to 10-year-olds, Aviv Lipman for 11- and 12-year-olds, and Michael Wong for the 13- to 16-year-old swimmers.

Tryouts are held the first weekend the pool opens in June, and this year Amitrano had to turn down 40 kids who hoped to join the team. He requires that participants have prior knowledge of swimming to make the team.

The team practices every day except Sundays. Not only does the team work on swimming technique, but the coaches train the swimmers with land work as well.

The swim team has other goals than winning and breaking records. On July 25, the team held a Laps of Love fundraiser for the food pantry at the Holy Name of Mary Outreach Center. Raising more than $1,100 in two hours, the team is aiming to reach its goal $1,500 by Aug. 11. Amitrano says most of the team members swam 100 laps, and received donations from sponsors for each lap completed.

The team will present a check to the church with Mayor Ed Fare on Aug. 11, the night of the synchronized swim team’s performance.

The team has been a part of the community since the early 1960s. Amitrano has been the head coach for 12 years and involved with the team for 28, but he doesn’t know the exact year it began. However, participating on the team is a family tradition. His wife, himself and his daughter Bridgette, who now coaches the synchronized swim team, have all swam and competed for the Valley Stream Swim Team.

Dripping wet from a hard workout in the pool, 9-year-old Adrian Sierzega knows what really makes the team a great success. “Everyone works hard,” Sierzega said, “and the team gets stronger every day because we practice every day.”