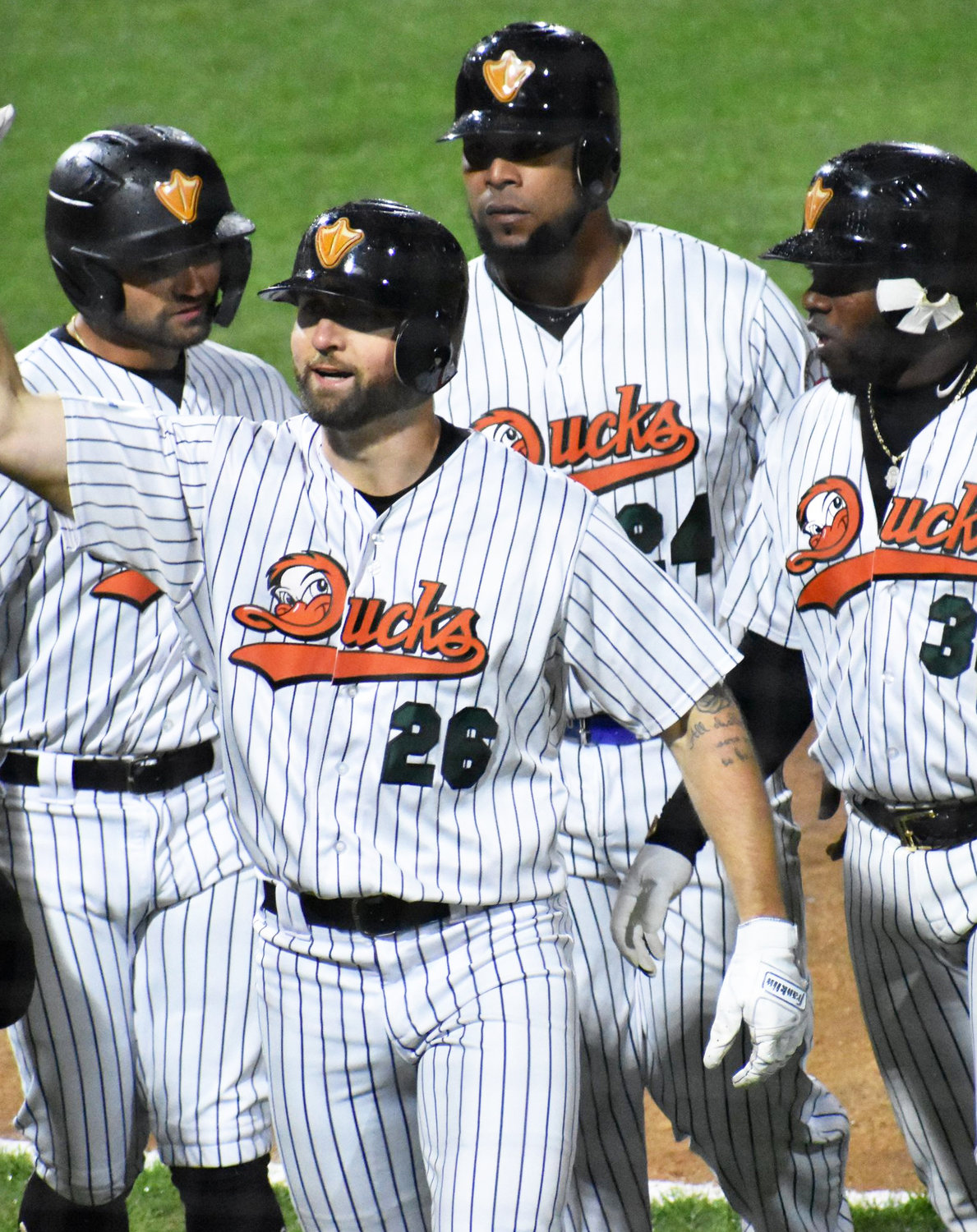 First baseman Sam Travis, No. 26, has been the Ducks' most consistent hitter and has 8 homers, 53 RBIs and a .314 batting average.
Courtesy Long Island Ducks
By Tony Bellissimo

For the first time under third-year manager Wally Backman, the Long Island Ducks enter the second half of the Atlantic League Baseball schedule without the security of a playoff spot.

The four-time league champion Ducks completed the first half July 5 with a record of 36-30, but that left them more than a dozen games off the pace of North Division runaway winner Southern Maryland.

“We made some changes with our pitching staff and I’m pleased with how we finished the first half,” Backman said. “We were 10 games over .500 in June and we’re going in the right direction.

“We’re not satisfied with our record and we know we’re capable of much more,” he added. “We know we’re better going into the second half. Southern Maryland had a great first half. We played them tough head-to-head. It’s just a lot of teams that beat us couldn’t beat them.”

Entering the second half, Backman said the Ducks’ five-man starting pitching rotation is comprised of Stephen Tarpley, Scott Harkin, Akeel Morris, Joe Iorio and Anderson DeLeon. Brett Kennedy, who had a team-leading 3.03 ERA, had his contract purchased by the Boston Red Sox on May 24. Iorio and DeLeon, who began the season in the bullpen, were both members of the Ducks’ 2019 championship team.

“Joe and Anderson have made our rotation better,” Backman said. “We’re going with five guys for now and I may even bump it to six with Bennett Perry coming back from injury.”

Tarpley, a lefthander who appeared in one game for the New York Mets last season, split six decisions in the first half with a 3.59 ERA and a strikeout-to-walk ratio of 53 to 13.

“We had a cold start to the year, but we’ve picked up our game a lot and we have a lot of promise,” Tarpley said. “Everyone is exciting about what we can accomplish in the second half.”

Regarding the offense, Backman said: “Right now our lineup is pretty set. We don’t have a big bopper who’s going to hit 30-40 home runs and can change a game on one swing of the bat.”

The Ducks went deep only 43 times in 66 games, ranking 9th in the 10-team league in the category.

“Our ballpark is tough to hit homers in regardless,” Backman added. “So we have to continue to manufacture as much offense as possible and we have the personnel to do it.”

First baseman Sam Travis has been Long Island’s most consistent hitter, Backman said. In the first half, Travis batted .314 with a team-leading 8 home runs and 53 RBIs. “Sam’s been hitting very well for us after not getting a lot of playing time in AAA in recent years,” Backman noted. “He’s playing every day for us and he’s right up there among the league leaders in RBIs despite missing a couple of weeks.”

Ten-year MLB veteran Alejandro De Aza, who played 108 games with Lancaster last season, is raking at the plate in his first year with the Ducks. The 38-year-old outfielder had a team-best .325 average in the first half with 5 homers, 32 RBIs and 34 runs. He’s part of a deep outfield that includes Johnni Turbo, L.J. Mazzilli and Dustin Woodcock.

The infield took a hit when the Mets purchased the contract of shortstop Deven Marrero, who anchored the Ducks defense. “We lost Deven who was by far the best shortstop in the league,” Backman said. “Good for him, but that’s a hard position to fill.”

Kevin Whatley made his Ducks debut July 5 and will see time at shortstop along with Vladamir Frias, the primary second baseman so far. Joe DeCarlo also plays second and splits time at catcher along with Austin Rei. Deibinson Romero returned at third base and had 7 homers and 30 RBIs in the first half.

“We just have to go out there and play the way we’re capable of playing,” Backman said. “When all is said and done, we should be right there in contention in the end.”

In attendance were two integral parts of the championship club. They included shortstop Dan Lyons, who was named the 2012 Championship Series Most Valuable Player after his walk-off bunt single in the bottom of the ninth inning in Game Five won the title for Long Island, and outfielder Kraig Binick, a native of Hicksville, who was an Atlantic League All-Star that year and batted .405 during the playoffs. Lyons threw out a ceremonial first pitch to Binick prior to the game against York.

“Our run to the championship in 2012 is one of the most memorable stories in Atlantic League history,” said Ducks President/GM Michael Pfaff. “On this milestone anniversary of that incredible season, we welcomed back some distinguished alumni and celebrated their accomplishments.”