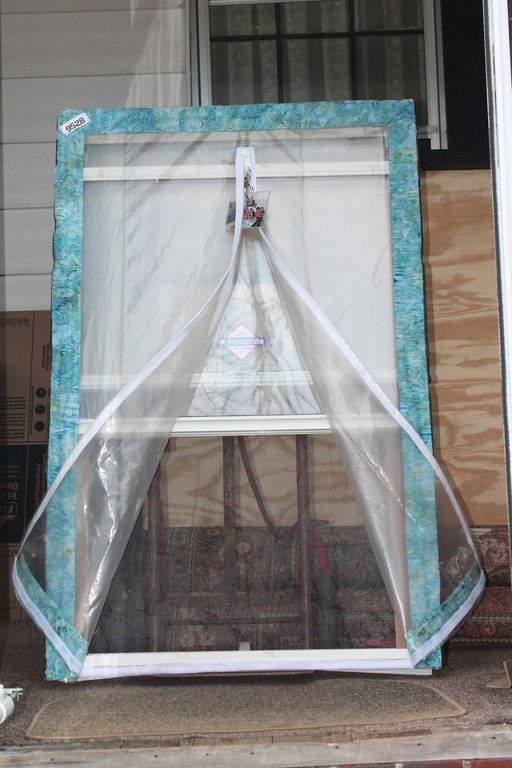 The Smart Cookies are seeking a patent on this window design.
Courtesy Denise Bryne 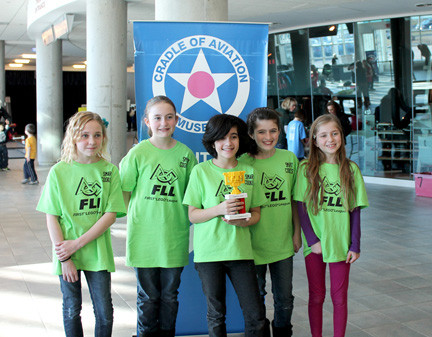 The Smart Cookies won several awards this year. Above, they celebrated a win at the Girl Scout Scrimmage at the Cradle of Aviation Museum in January. The victory allowed the girls to advance to the Long Island Championships.
Courtesy Karen Levine 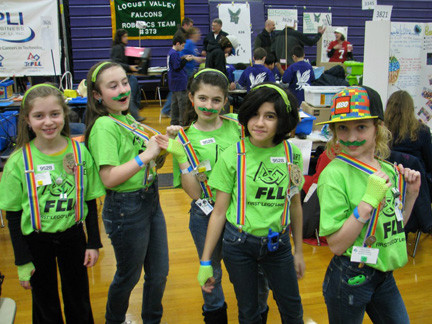 The Smart Cookies, a local robotics team comprised of 4th and 6th grade Girl Scouts, won an innovation award at the First Lego League (FLL) Long Island championship tournament on March 3 in Middle Island. Three of the Cookies hail from Baldwin, one is from Freeport and one is from Bellmore. The team is sponsored by the Girl Scouts of Nassau County and consists of members from three different troops, said coach Denise Bryne.

The Smart Cookies’ robotics season was a string of successes. They took first place wins at the Girl Scout Scrimmage in January and the championship qualifier competition in February. Then they wrapped the year with an Innovative Solutions award at the Long Island championships.

The theme of the FLL this year was “Senior Solutions” and the Smart Cookies: Megan, Alexa, Violet, Meganne and Julia, used Lego Mindstorm gears, wheels, tracks and tires to construct autonomous robots that could perform assigned tasks. Bryne, who works with co-coach Rita Cavanagh, said the team also prepared a research presentation and was evaluated on their teamwork as well as their robot design and performance.

The girls’ innovation prize, the finale to a superior campaign, was awarded for their concept of a zipper window (patent pending), which Bryne described as “an interior attachment that allows the regular window to be kept open, while the Zipper Window itself can be easily opened or closed.” The Smart Cookies’ idea was that their special window would allow seniors to remain independent, and would free them from the difficulty of opening and closing conventional windows. “The Zipper Window is easily installed using velcro/velcro-type material, is easy to open and close with its zipper, is easy-to-clean, cost-effective and is attractive with its decorative border that can match any interior. It can be made for all standard sized windows in addition to custom sizes,” read the team’s written description of the innovation.

The FLL provided the Smart Cookies a chance to exercise their brains, of course, but the girls also had some laughs in the process. Teams at FLL competitions often wear costumes with themes like Star Wars or The Wizard of Oz. The Smart Cookies themselves opted for dayglo green shirts, rainbow suspenders and, in some cases, green paste-on moustaches.

“Our season has concluded with another trophy,” said Bryne, who plans to work with the team to bring their zipper window idea to market. “The girls come from three different troops, but have enjoyed working together and look forward to next season!”