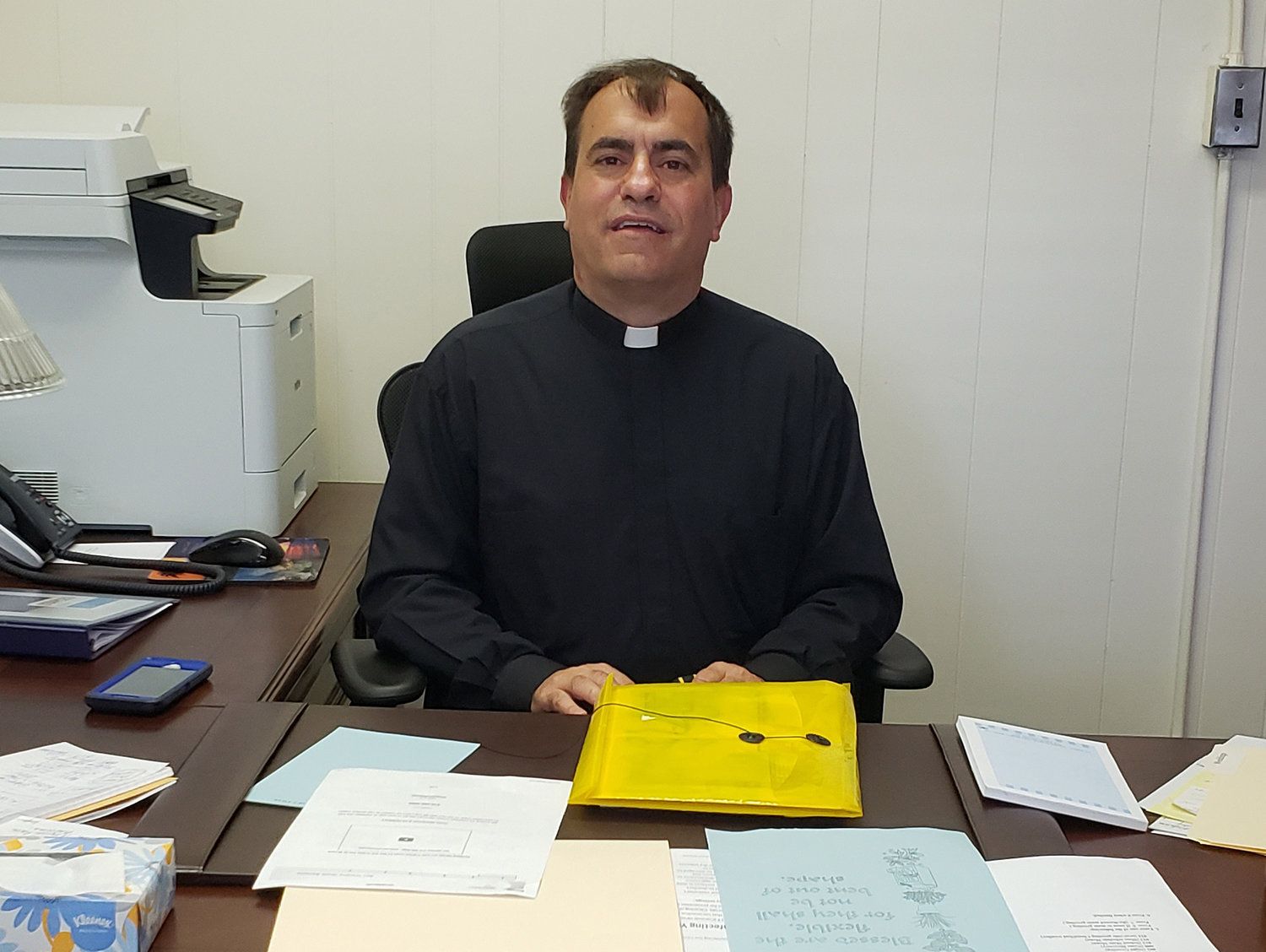 The Rev. James Stachacz, 52, began his tenure at Our Lady of Lourdes Church, in Malverne, on Aug. 26.
Nakeem Grant/Herald
By Nakeem Grant

When the Rev. James Stachacz was named Our Lady of Lourdes Church’s pastor in June, he was unsure of what to expect from his new parishioners. His predecessor, the Rev. Michael Duffy, told Stachacz that the parish is similar to “Mayberry R.F.D.,” a spin-off of “The Andy Griffith Show.”

“He’s right,” Stachacz, 52, said of Duffy. “So far people have been very friendly, kind and helpful.”

Stachacz began his tenure at OLL on Aug 26, two months after Duffy, the pastor for the past three years, was appointed rector of St. Agnes Cathedral in Rockville Centre. Stachacz was in the middle of his second six-year term as pastor of St. Ignatius Loyola, in Hicksville, when Bishop William Francis Murphy, of the Diocese of Rockville Centre, moved him to Lourdes. Stachacz attributed the sudden change to the coronavirus pandemic and its impact on local communities, and noted the death of Monsignor Romualdo Sosing, of the Holy Name of Mary Church in Valley Stream, of Covid-19 in May — two months after Stachacz himself had a bout with the virus.

“When he passed away, I think that changed everything,” he said of Sosing. “In our job, you just don’t know when things are going to change. I guess it’s like the Lord and his disciples, who moved from house to house.”

Stachacz grew up in Dickson City, a small town in Pennsylvania. In 1986, fascinated by weather, he began studying meteorology at Rutgers University, but his interest in the priesthood grew when he took part in the Catholic campus ministry at Rutgers’ Newman Club, an association for Catholic study, service, spirituality and community. After transferring to Kings College in Wilkes-Barre, Pa., he earned a degree in human resources management with a minor in philosophy in 1991. Ordained in 1998, he received a master’s in divinity from the Seminary of the Immaculate Conception in Huntington.

“I know I could’ve helped to lead others to Jesus Christ as an associate,” he said, “but in that role you don’t have as much authority or decision-making. But I do understand that this role comes with a lot of responsibility.”

Stachacz said he was drawn to Long Island because he and his family visited relatives in Farmingdale when he was a child. Now a Malvernite, he said that the village is unlike any other community he’s known. “Hicksville doesn’t really have a village or community center,” he said. “Having a close-knit village like Malverne makes a huge difference.”

Stachacz said he hoped to work closely with OLL’s school community while getting to know his parishioners better. “I want to help our parish to be that message of hope for others, with everything that’s going on in our country and our world,” he said.

He added that he was pleased to see more people attending services in person in recent months. The church allows gatherings of only 33 percent of its capacity, in keeping with state guidelines. He continued Duffy’s outdoor Mass service, which Duffy implemented during the summer months to attract more parishioners.

“Father Jim is a dynamic, effective, holy priest,” Duffy said, “and I know that [the] parish will receive him and welcome him with the same openness as they received and welcomed me.”

An outdoorsman who enjoys walking, hiking, biking and going to the gym as well as traveling, Stachacz said that keeping up those activities had been challenging over the past few months. He contracted Covid-19 in March, and since then, he said, he has understood the need for safety guidelines, and was thankful to get back to doing what he loves.

“I’m just happy that I have the chance to bring families closer together,” he said, “and that I get to bring them the message of Jesus Christ in a way that people will understand, absorb and share it.”