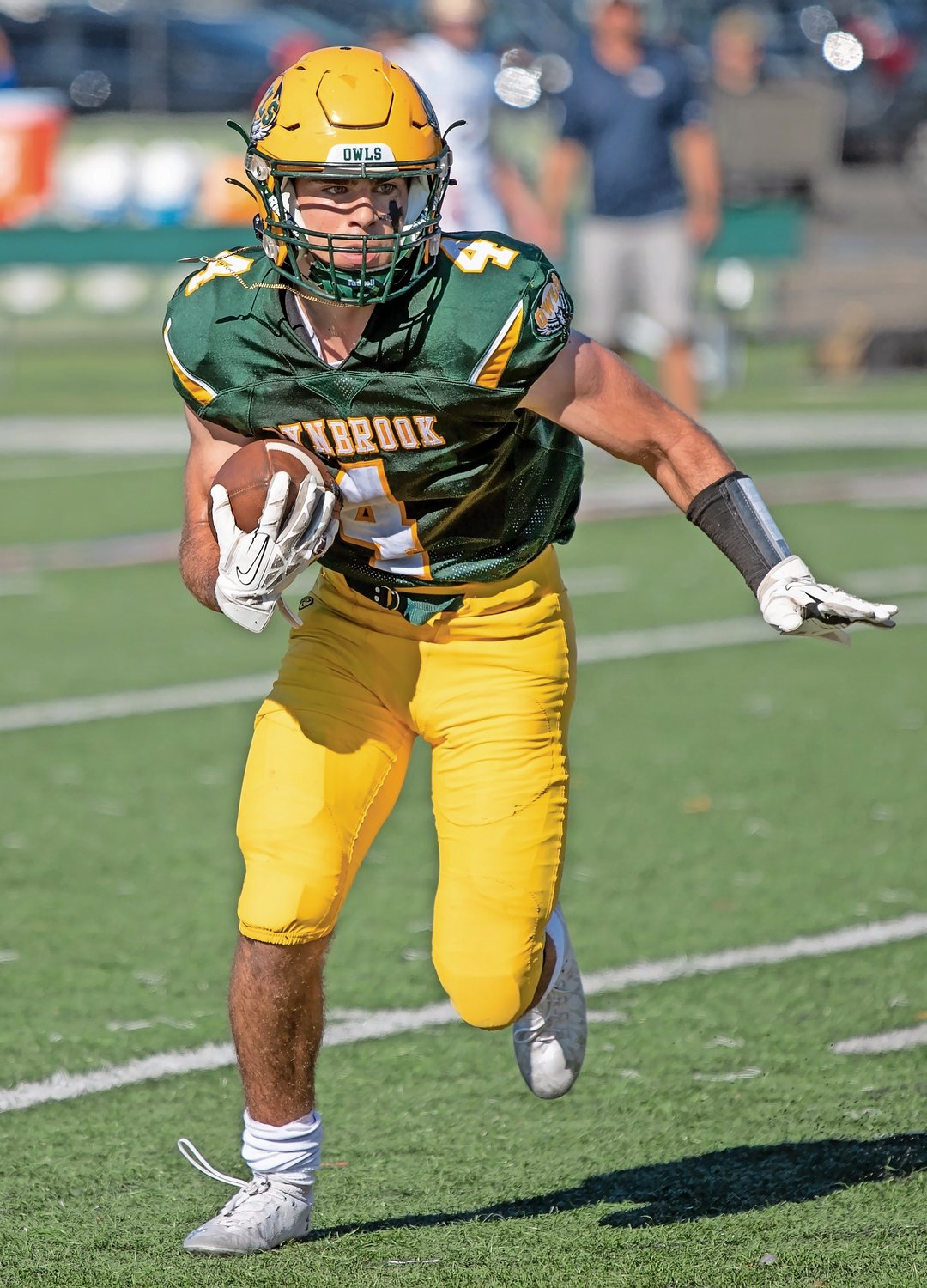 The first half of the Nassau County high school football season concluded last weekend and Lynbrook stated its case to be at the top of the list of surprises as the schedule turns the corner.
The Owls, who were unable to reach the win column in the spring, are getting the job done in all three phases and could have a say in the Conference III playoffs come November. They’re 3-1 at the midway mark after coming back twice to overtake Roosevelt, 40-19, on the road behind senior Christian Meszaros’ 158 yards rushing and three touchdowns.
“There are many factors why we’ve been so successful, and the senior leadership and all of the kids’ offseason dedication rank at the top,” Lynbrook head coach Steve LoCicero said. “We’ve been very productive on offense, playing really solid defense and the special teams have also been strong. We’re excited about where we are, but there’s still a lot of potential here.”
Lynbrook, which rushed for 378 yards, trailed Roosevelt 13-12 at the half before scoring four straight touchdowns to take a commanding lead midway through the fourth quarter. Junior Michael Fagen put the visitors ahead for good with an 11-yard touchdown run in the third. Fagen, who added the two-point conversion, had 132 yards on the ground and two scores on the day. Meszaros had two touchdown runs in the final quarter and senior Matt Sollitto added a defensive score with a 53-yard fumble recovery.
“We’ve had great practices and it’s carrying over into games,” LoCicero said. “We went back to a no-huddle offense this season and the kids are executing so well. Playing at a high tempo has made things difficult for defenses to plan for us.”


The Owls were coming off their only loss to date, a 36-20 setback to visiting Bethpage on Sept. 25. They spotted the Golden Eagles the first 15 points and played evenly the rest of the way, LoCicero explained. Bethpage quarterback Luke Galgano went 8-for-8 for 252 yards and three scores, while Fagen (70-yard run), junior Jaylen Chambers and junior quarterback Chris Lucchese found the end zone in defeat.
Seeded No. 12 in the 14-team conference, Lynbrook made plenty of noise out of the gate with convincing victories over Valley Stream South and defending county champion Manhasset. The offense totaled 99 points in the wins, with senior kicker Olivia Vuotto making history in the opener by becoming the first female to score points for Lynbrook football. She booted four extra points in the 41-6 rout.
Vuotto nailed five extra-points one week later as Fagen (three touchdowns), Meszaros (two) and senior Tyler Ippolito (12 tackles) set the tone in an eye-opening 48-27 win at Manhasset. Ippolito is the team’s leading tackler and setting the defensive tone along with seniors Dylan Murphy and Adin Weiss.
Murphy is also a key part of an offensive front that includes junior center Mike O’Hagan, seniors Harrison Kirby and Emanuel Terry, and junior Jake Lunati.
“One game at a time,” LoCicero said.
Next up is a trip to Mineola this Saturday at 2 p.m. Homecoming follows on Oct. 16 versus Kennedy.