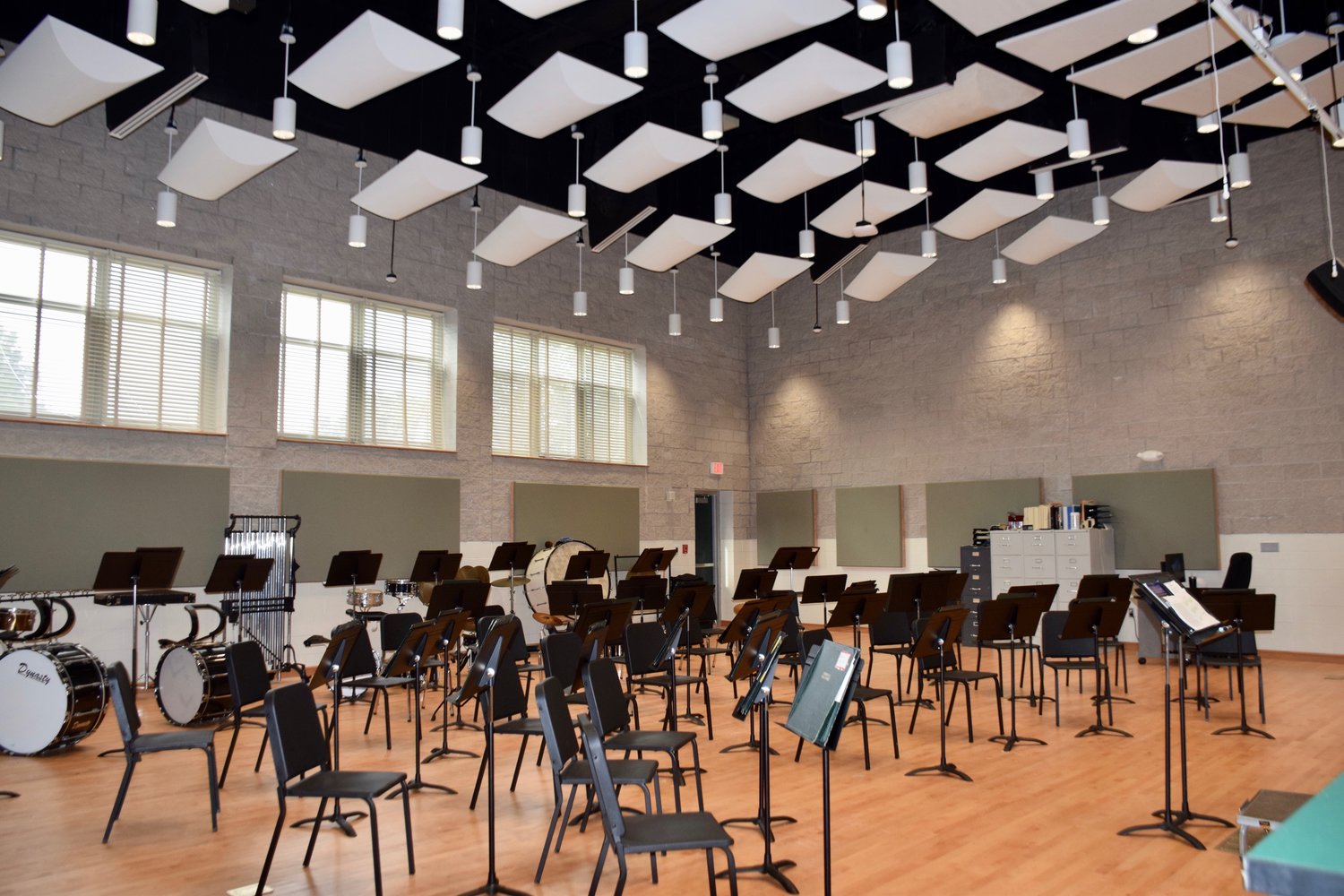 Lynbrook High School recently opened its new 33,274-square-foot extension, which was funded as part of a $28.9 million bond that voters approved in 2017. Above, the new band room at the school.
Courtesy Lynbrook Public Schools 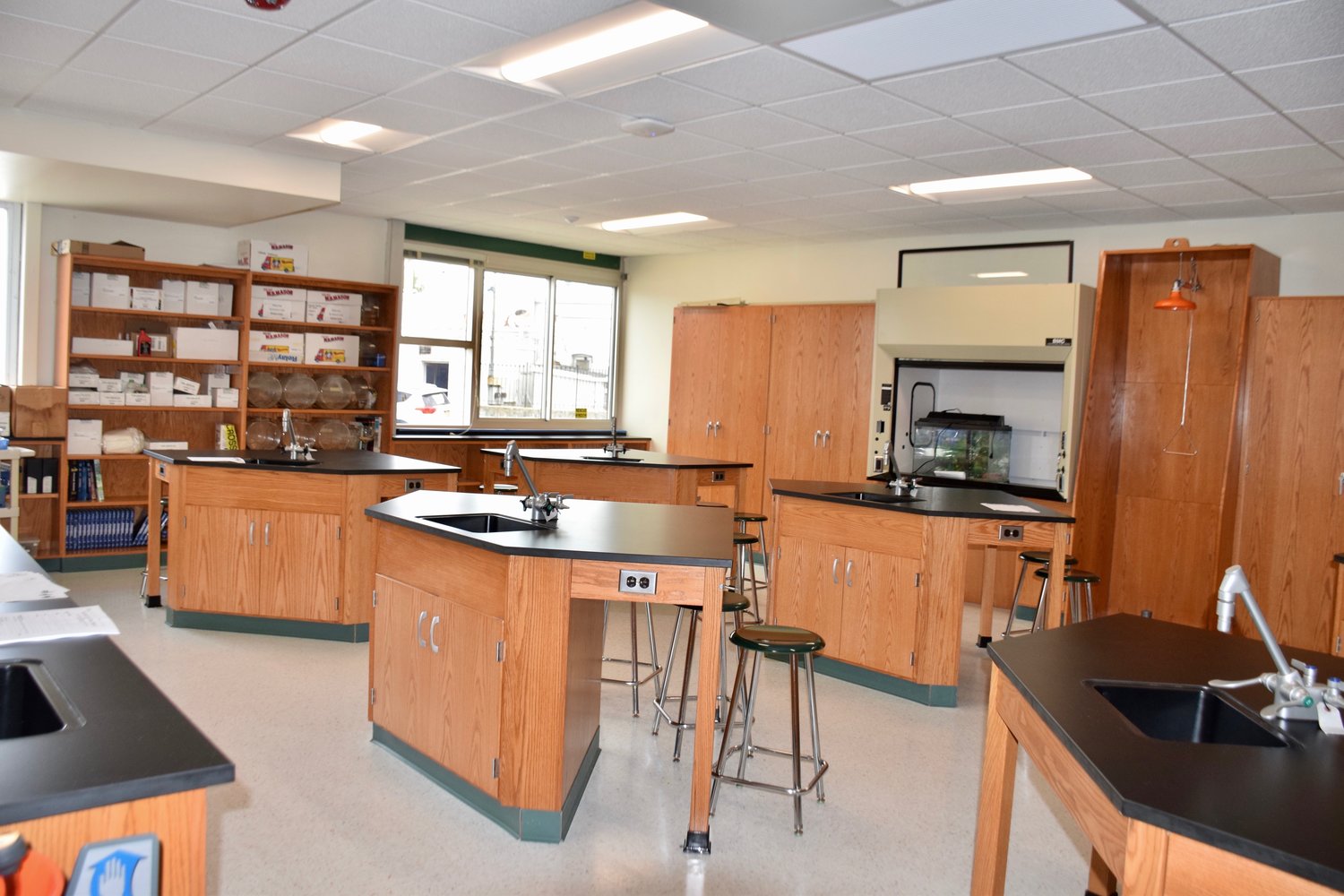 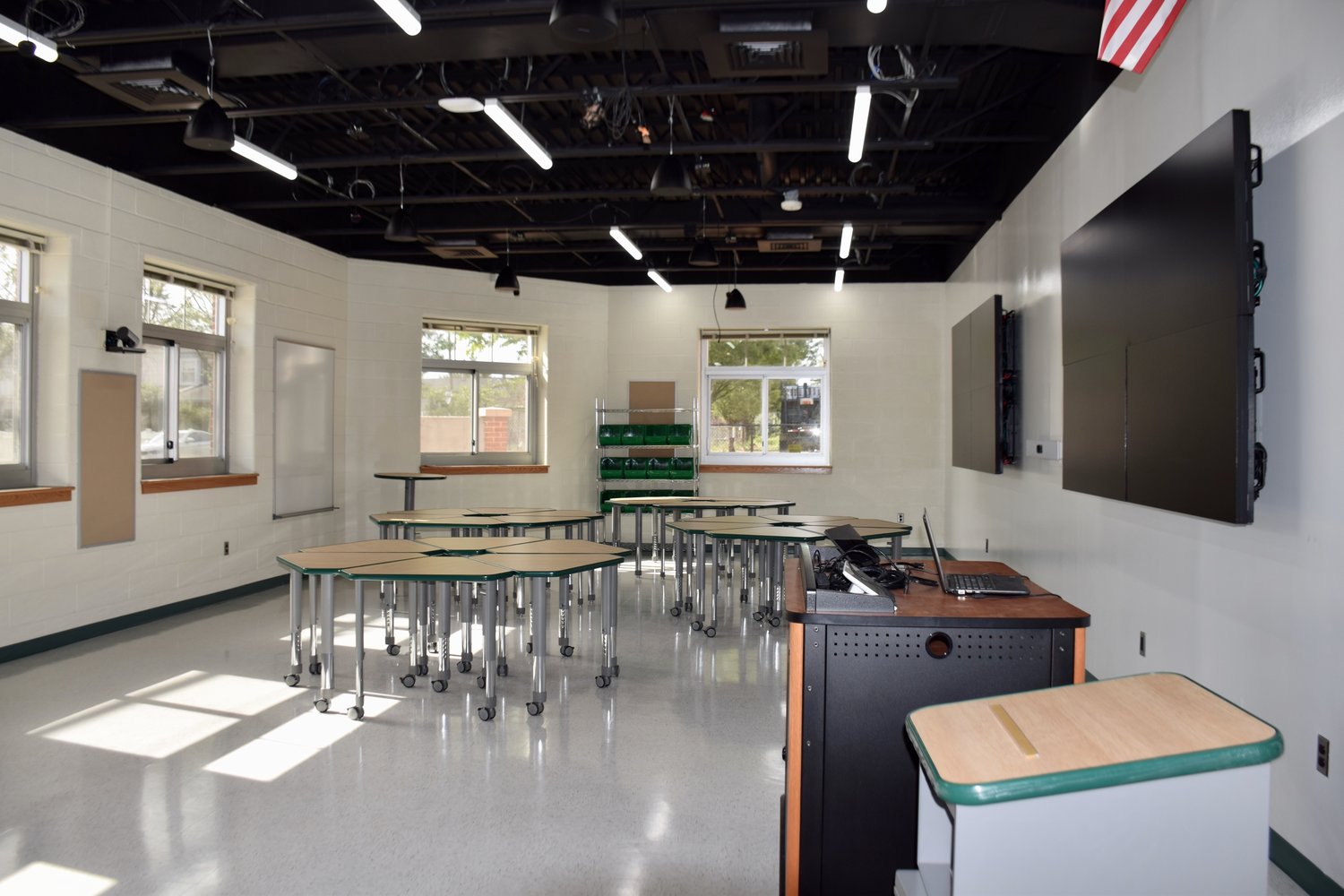 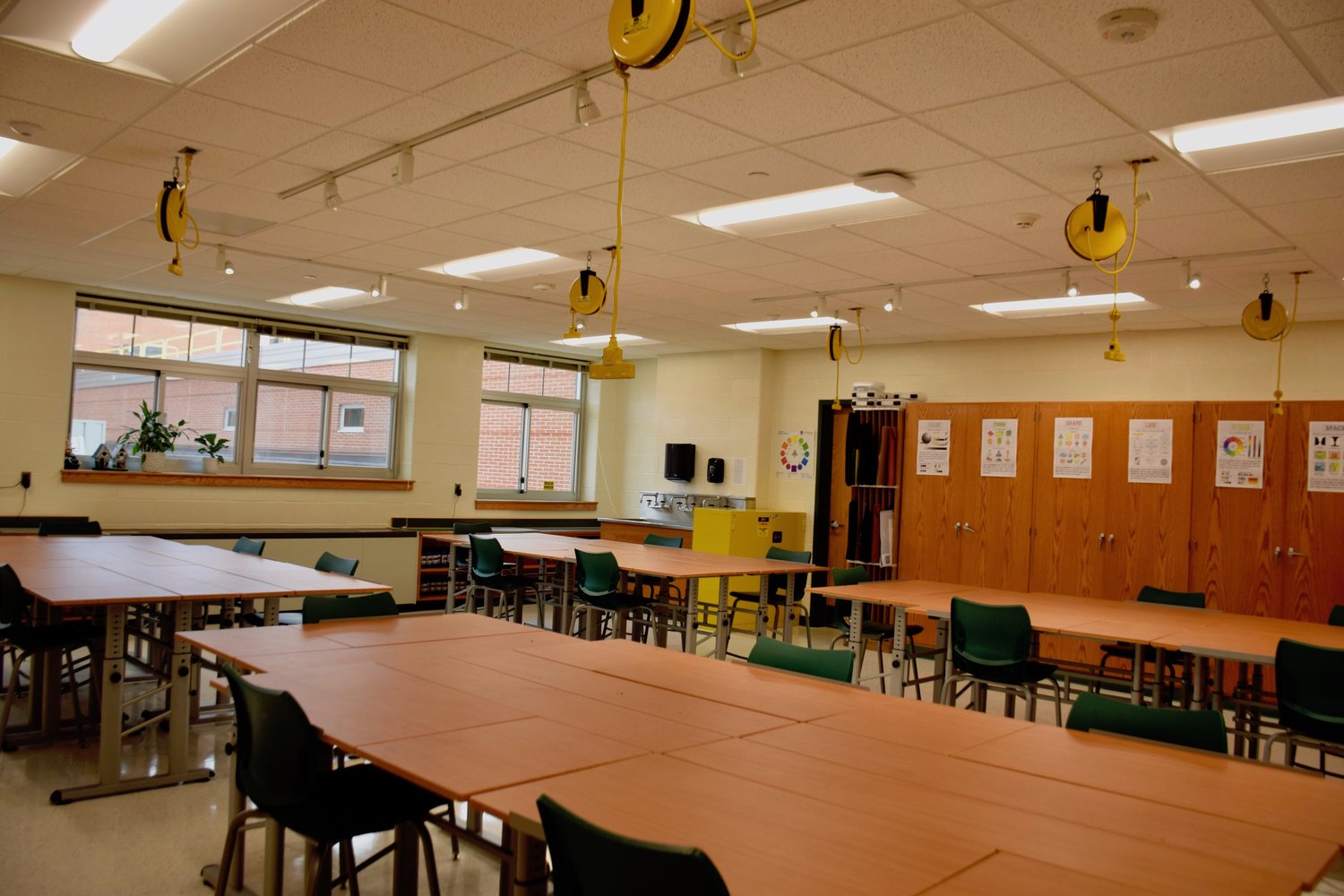 There are three new art rooms, including this one.
Courtesy Lynbrook Public Schools 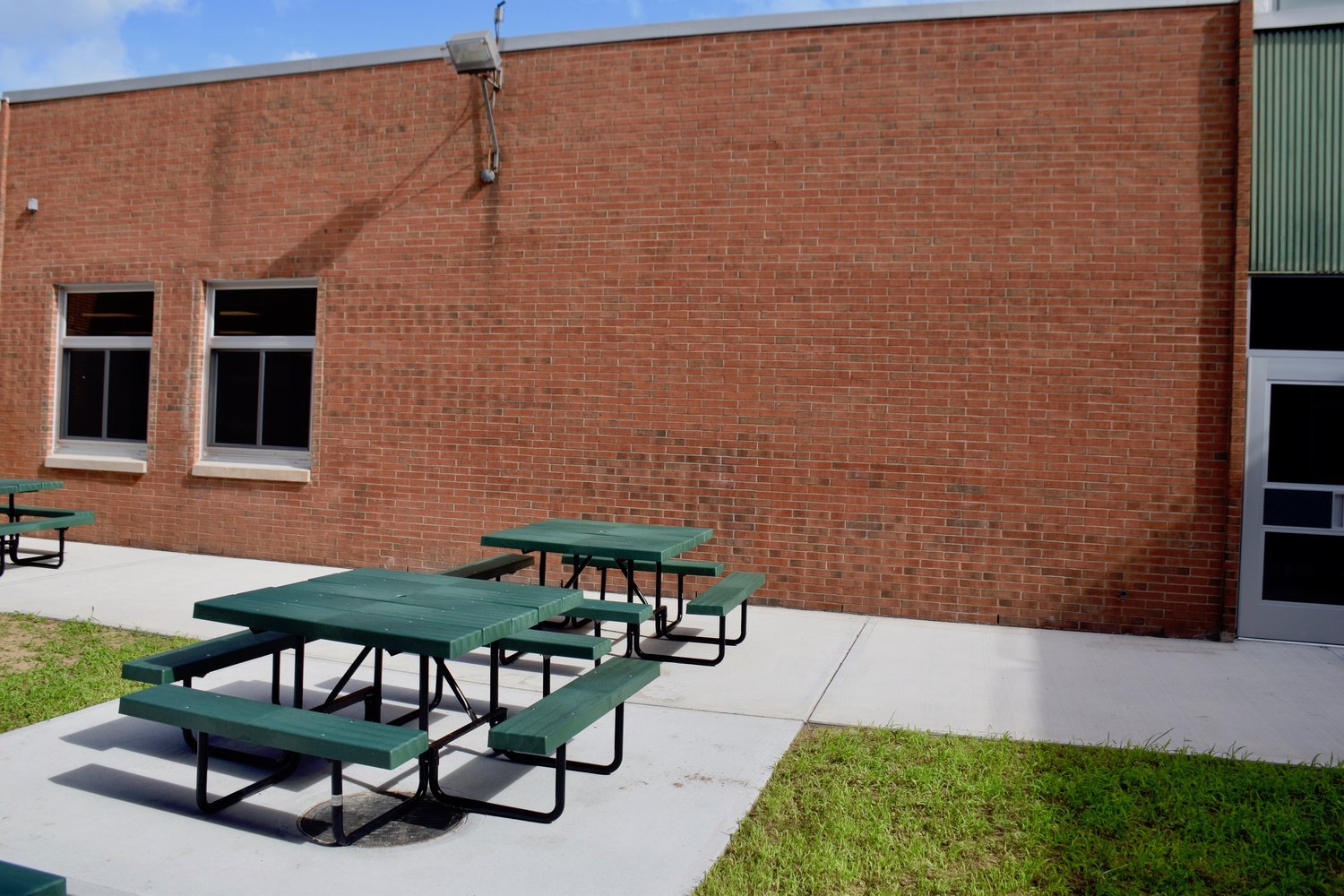 The new courtyard outside the cafeteria enables students to get fresh air on their lunch break.
Courtesy Lynbrook Public Schools
Previous Next
By Mike Smollins

After passage of a $28.9 million bond in 2017, Lynbrook High School’s new wing was recently completed after a year and a half of construction.

“It has been a collective effort to complete this project and expand the opportunities of Lynbrook High School’s students,” Superintendent of Schools Dr. Melissa Burak said in a statement. “It was our dream and our vision to get to where we are today. With the setbacks due to Covid and the delays in materials, it was truly a climb, but we are excited to welcome our students to the new spaces.”

The two-story, 33,274-square-foot extension stretches from the front of the high school, where the security vestibule is, to the fields. A ribbon cutting for the new wing took place Sept. 1, and later this month, a ceremony will be held to dedicate it to late longtime Board of Education Trustee Alicemarie Bresnihan, who died on May 11, 2020, after 45 years of service on the school board.

The total cost of the 20-year bond that voters approved in 2017 was $33.9 million, $5 million of which was covered by reserve funds. Approval of the bond raised property taxes by $168 per year for the average Lynbrook homeowner.

The extension comes after school officials sought upgrades for many years for several reasons, including cramped classrooms, outdated science equipment and lab stations, and the chorus, orchestra and band being forced to practice in the aging, outdated auditorium because they did not have a proper space. Ideas for improvements that the bond covered came from a group of administrators, faculty members and architects after gathering feedback from students and parents.

On Sept. 23, James Saitta, the Lynbrook Public Schools’ director of facilities, took the Herald on a tour of the new wing along with a school district photographer.

The first floor of the new addition houses a school store; three music rooms for the school’s band, chorus and orchestra; three art rooms; and an innovation lab for 21st-century learning. The second floor comprises five new classrooms, including two for family and consumer science classes and one for the career development program.

In addition to an updated facade and brickwork at the LHS entrance, there are also extra security features, with visitors having to be buzzed in twice before entering the facility. The cafeteria was also upgraded, with repainted walls, new floors decked out in the green and gold school colors, new windows to provide natural lighting and a courtyard outside where students can congregate during their lunch periods. Class of 2020 graduates buried a time capsule in the courtyard, which will be opened in 2040. The new edition also houses a nurses’ office closer to the high school entrance, which will provide easier access in the event of an emergency.

Plans for the first-floor school store are still being finalized, but it has a microwave, a refrigerator and will soon house Owls merchandise that students will sell, giving them knowledge about how to run a business.

“It’ll teach kids skills that they can take when they leave the schools,” Saitta said.

The first floor also houses a spacious innovation lab that will soon serve as a highly advanced room for technology classes. The room is equipped with cameras that can follow teachers while they instruct, and can project what they are doing onto two large screens.

“The room is really designed to be like a think tank,” Saitta said. “Different teachers throughout the day can come in here and sign out for it.”

Outside the lab in the hallway, a large display case will soon be home to a stained-glass window from the original high school in the 1920s to showcase LHS’s history. The three new large music rooms feature modern lighting and acoustics to support the various programs, as well as places to store instruments when they are not in use.

“It’s really a step in the right direction, I mean a huge step,” Saitta said, “and it gives the teachers the proper space to educate the kids.”

The wing also houses a program for students with special needs, where they can learn life skills and assist in running the school store, and a family consumer science class with six different kitchens that are equipped with updated stoves and materials. Additionally, there are three art rooms, one of which has a 3-D industrial design class, and there will soon be a kiln installed.

In addition to the new wing, the bond also covered a full-scale renovation to the school’s science wing, where walls were knocked down, rooms were rebuilt, and new research labs were installed with tables that are equipped with gas and water. The classrooms range from 922 to 1,633 square feet, and will provide space for more science, technology, engineering and math, or STEM, courses.

The 2017 bond’s approval came after a $46 million proposal was voted down by 314 votes in March 2016. After that failure, school officials scaled back projects, distributed a voter survey to gather feedback and restructured another proposal that fit the district’s needs. The bond also covered updates of the middle school locker rooms; installation of air conditioning in the elementary and middle school gyms; an upgrade of the wrestling room at the Lynbrook Kindergarten Center, across from the high school; and renovations to the auditorium.

“When you see the space and how much it enhances the educational process for our students, it really is a very exciting time,” Board of Education President William Belmont said in a statement.

Lynbrook officials plan to host an open house for residents to tour the new facility on the following dates: