Giving the Owls an extra kick 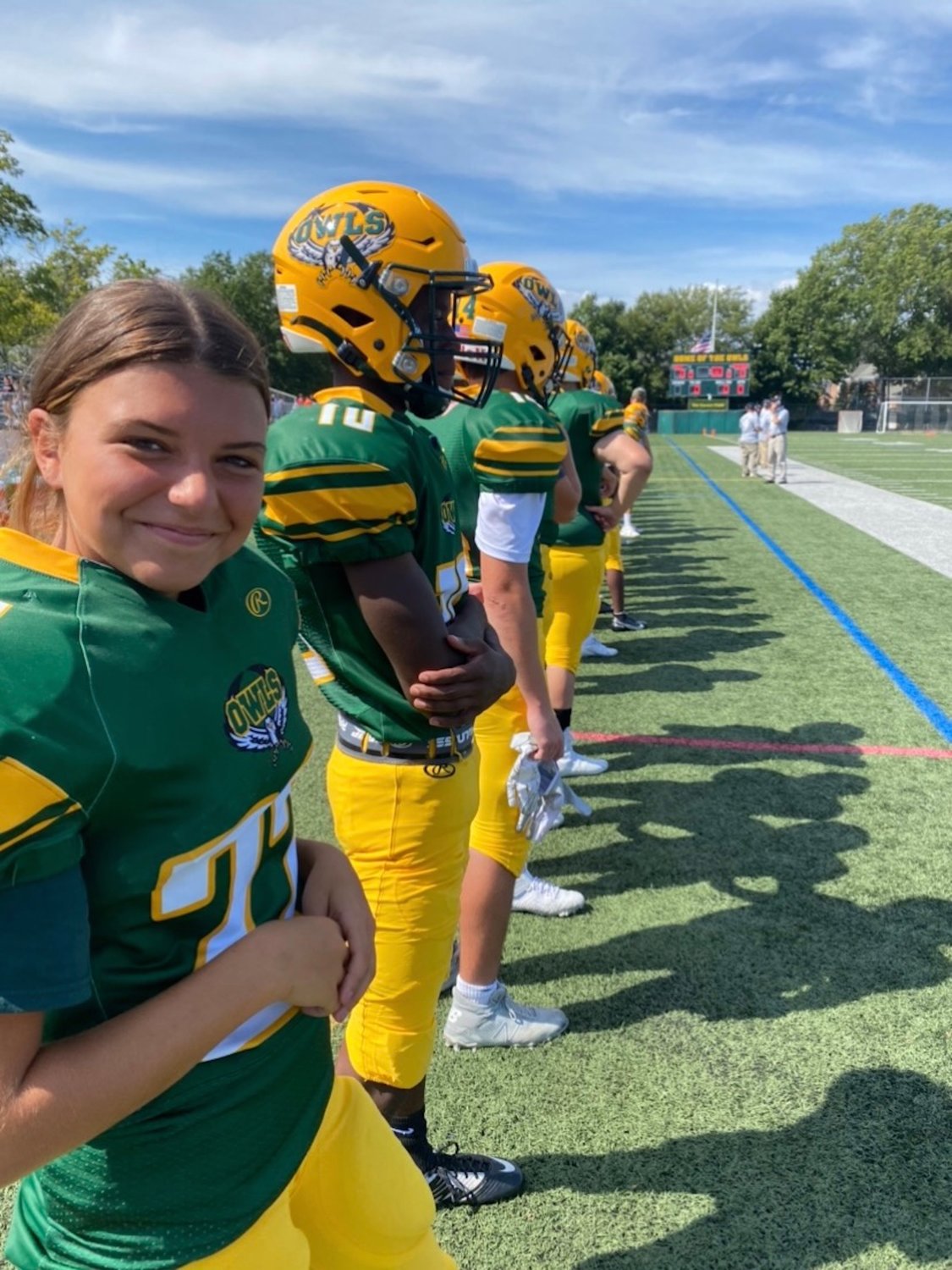 After joining the varsity football team as a kicker, Lynbrook High School senior Olivia Vuotto has thrived in the role, becoming the first female in school history to score points in football.
Courtesy Olivia Vuotto 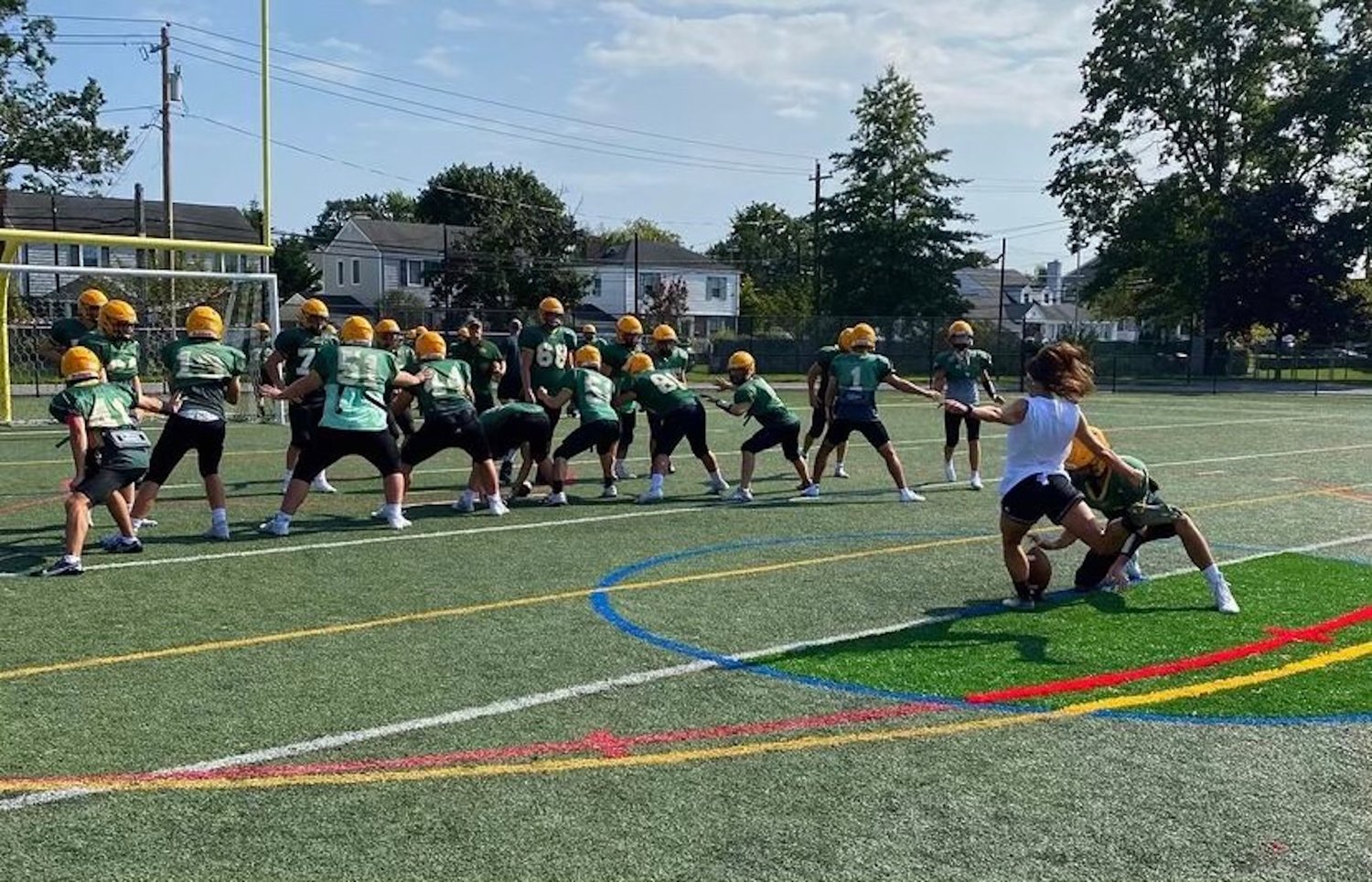 Vuotto said her teammates have embraced her.
Courtesy Olivia Vuotto
Previous Next
By Mike Smollins

Lynbrook senior Olivia Vuotto said she never thought about playing football, but jumped at the chance to become a kicker for the varsity team when head coach Stephen LoCicero approached her. Now she’s making history one kick at a time as the only girl to ever score points for the Owls on the gridiron.

LoCicero was hosting the first day of camp on Aug. 23 and in need of a kicker when he glanced over toward the track and saw Vuotto, 17, taking part in a captains’ practice for the girls’ varsity soccer team, on which she is a midfielder. Having coached her in basketball in the past and her father, Joe Vuotto, in football when LoCicero was the wide receiver coach for Lynbrook in 1991, it dawned on him to ask her to kick extra points for the varsity squad.

After a tryout, LoCicero recruited Vuotto to the team, and she now plays soccer and football for the fall season. Since she joined, she has gone 8 for 9 in extra points (one was blocked, not missed), and has helped the Owls (2-0) become the second-highest-scoring team on Long Island to start the season with 89 points.

“She’s like automatic,” LoCicero said. “The team has welcomed her in, and they’re excited about her. The community has been very receptive, the school is very receptive. Everybody’s been part of that Lynbrook family, and we’re very excited for her and for the football program.”

Locicero began coaching at Lynbrook High 31 years ago, taking on the head coach role in 2006. He d never had a girl on the football team roster before this year, but said he hoped it could be the beginning of a trend of integrating more girls into the sport. While Vuotto handles the extra points, Joe Patitucci performs kickoffs and field goals, and Max Dantona handles some kicking duties when Vuotto can’t make it because of soccer.

Vuotto attends soccer practice throughout the week and then performs reps with the football team a few days per week afterward. On Sept. 18, she and the Owls played Long Beach to a 1-1 tie in soccer at Lynbrook in a game that started at 10 a.m., and she then traveled to Manhasset for a 2 p.m. football game, arriving with 15 minutes to spare. After getting 10 quick practice kicks before game time, she went 4-for-5 in extra points for the Owls.

“I was actually wearing my soccer jersey under my football jersey because I didn’t have time to change,” Vuotto said with a laugh.

Upon joining the team, Vuotto chose to wear No. 22 in honor of her father because he donned the number when he played for the Owls. Though playing football was an adjustment for her, she said, she has become comfortable with it and has felt support from her teammates and coaches. While she has enjoyed football, she added, she hopes to play soccer in college, and has yet to decide where she will attend.

“She’s everything you’d want in a young woman,” LoCicero said. “She’s intelligent, she works hard, and she’s a pleasure to be around. She’s funny, and she’s got ice in her veins. She can kick. It’s incredible.”

Vuotto said she hoped that she could become a trailblazer for more girls who want to play football someday. “I really just hope that I can leave an impact for other girls in the future,” she said. “I feel like that’s my main goal.”