Money from tournament goes to veterans 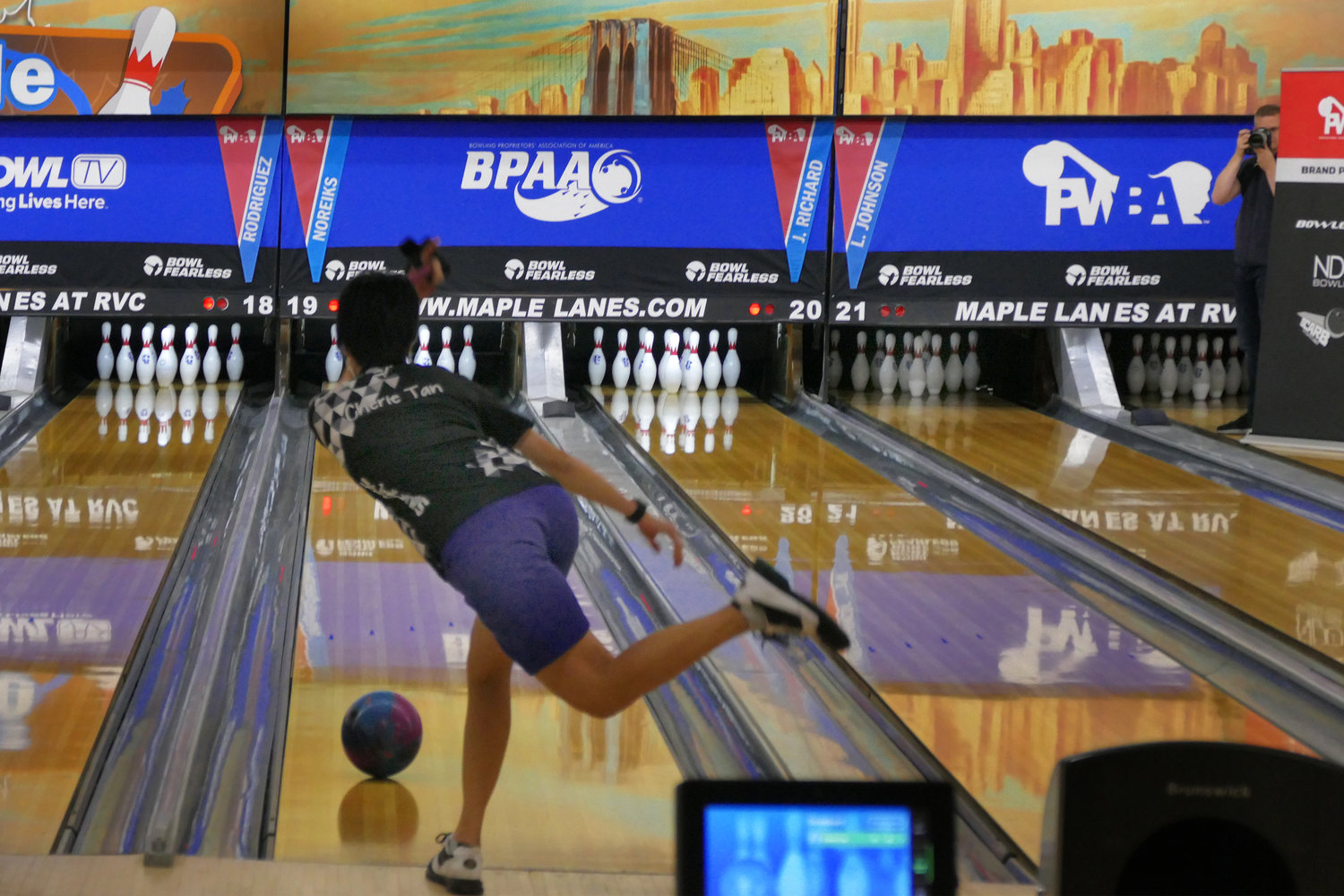 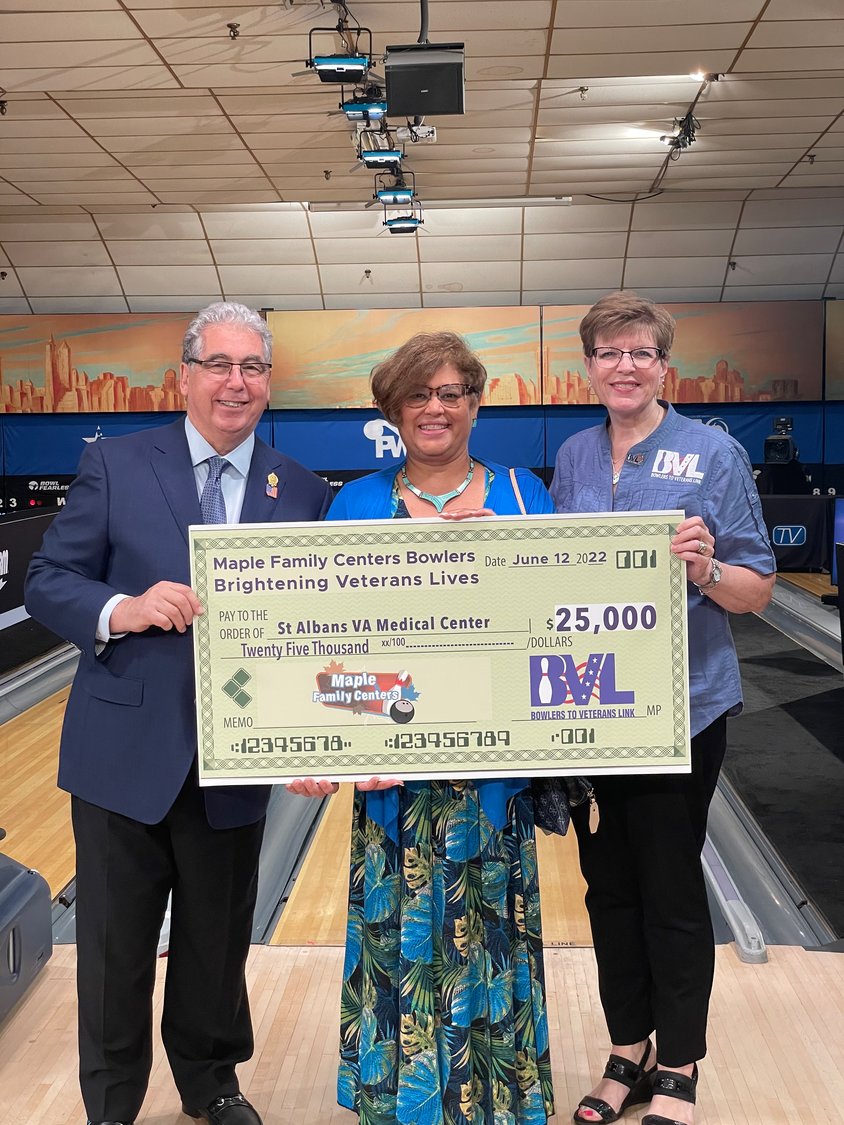 The crowd at Maple Lanes watched as Bryanna Coté spun another strike on her way to the PWBA BVL Classic title on Sunday.
Tom Carrozza/Herald
Previous Next

Whatever it takes to bring some joy to those who served, we want to be a part of that.”
John LaSpina Owner, Maple Lanes
By Tom Carrozza

Rockville Centre’s Maple Lanes hosted some of the top bowling talent in the world for a nationally televised tournament for a cause last week. The Bowlers to Veterans Link donated money from the event to veterans programs across the country.

Residents may have seen the large trucked parked outside the bowling alley on Maple Avenue. It carried dozens of bags of equipment, including the professionals’ bowling balls.

The festivities kicked off with Bowl with the Pros on June 6, when young bowlers got the chance to learn from some of the best bowlers in the women’s game.

The week wrapped up with the nationally televised Professional Women’s Bowling Association BVL Classic on June 12, which featured top competitors including Danielle McEwan, Shannon O’Keefe, Stefanie Johnson, Bryanna Coté and Diana Zavjalova. The fourth-seeded Coté, of Tucson, Arizona, took home the $10,000 top prize with scores of 289, 243, 278 and 212. All told, the BVL raised over $75,000 for veterans over the course of six days.

The sport of bowling first made a connection with veterans in 1942, when members of the Women’s International Bowling Congress paid for planes to bring wounded soldiers home from the battlefields of World War II. Inspired by that effort, the BVL has donated over $54 million over the past eight decades through tournaments, car shows, 50/50 raffles, donations and more.

John LaSpina, of Long Beach, the owner of Maple Lanes and the current BVL national chairman, said he was excited to return to his Rockville Centre alley for the tournament for the first time since 2019. After a week of bowling action, the BVL donated $25,000 to the Long Island State Veterans Home in Stony Brook, and another $25,000 to the VA Hospital in St. Albans, to refurbish its bowling center.

The BVL also offers grants that fund diverse activities for veterans including equestrian programs, drum therapy, ice fishing, community gardening and, of course, bowling. Most recently, money from the BVL helped fund virtual-reality therapy system called “Mynd VR” for veterans at the Stony Brook facility, which helps bedridden veterans relax by doing things like virtually swimming with dolphins or sitting on a beach. LaSpina said that the organization has been combating PTSD in veterans since before the condition had a clinical name.

“This is a great tool and it helps the veterans go to their happy place,” Deputy Executive Director of the Stony Brook facility Jonathan Spier said of the VR system.

“There was a promise that was made 80 years ago by the bowling community that we would always be here for people who served,” BVL’s executive director, Mary Harrar, said. “And we have kept that promise through recessions, and wars, and now a pandemic.”

According to Harrar, the BVL managed to collect $687,000 in donations during the pandemic.

LaSpina, who lived in Rockville Centre for decades before moving to Long Beach, owns Maple Family Centers, five bowling alleys in New York and Florida. He was loosely involved with the BVL until the attacks on the World Trade Center in 2001. Amid the armed conflicts in Iraq and Afghanistan that followed, producing many more veterans, LaSpina made it a goal to take a larger role in the BVL.

“Whatever it takes to bring some joy to those who served, we want to be a part of that,” he said. “The bowling industry has always supported them.”