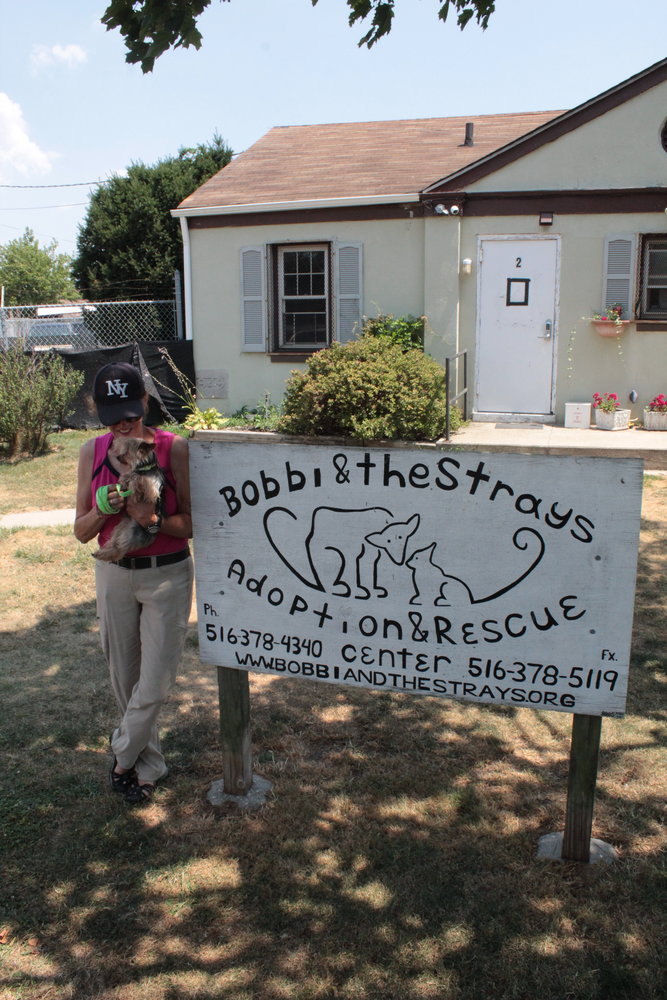 A West Hempstead man was detained on July 21 for allegedly abandoning his critically malnourished dog outside a Freeport animal shelter.

According to Nassau County District Attorney Anne T. Donnelly, Damian Douglas abandoned the roughly four-year-old, malnourished dog on July 7 outside the Bobbi and the Strays Animal Shelter at 2 Rider Place.

The severely emaciated dog, named Athena by employees of the shelter, was left in a crate outside the Freeport animal rescue for someone else to find.

Athena was not only malnourished, but had several serious open wounds.

The district attorney’s report states that Douglas bought the dog from a breeder in Greensboro, North Carolina, and named it “Skyy.” In November, he allegedly began keeping the dog in a crate on an enclosed porch outside his Freeport dwelling, and took her out for periodic walks.  Douglas allegedly stopped taking the dog out of the kennel entirely in February.

“The defendant allegedly kept his dog in a crate outside his home for at least eight months and allowed his animal to suffer open sores, severe malnourishment, and muscle wasting,” Donnelly said. “This is one of the worst cases of extreme confinement and animal cruelty we’ve ever seen in this county. We take crimes against defenseless animals very seriously. I thank the countless members of the public who called our hotline to assist in this investigation.”

Douglas was arraigned in front of Judge David Levine and released on his own recognizance, as required by law.

He is scheduled to appear in court on August 2 and could face up to 364 days in prison.

The action taken by the district attorney’s office received praise from the Nassau County SPCA.

Richard Flynn, 52, has worked as a caretaker at Bobbi’s for more than five years. When he arrived at work on the morning of July 7, he was shocked at what he saw. He initially thought someone had left the crate as a donation to the shelter.

“So, I come over and I look, and it was just a horrible, horrible, horrible thing I saw,” said Flynn, “The dog was laying in the crate, filled with feces and the smell of urine. The crate itself was so filthy, the blanket was so filthy that it stunk to the high heavens. And there’s a little emaciated, brown little girl.”

Immediately everyone at Bobbi’s stopped what they were doing to give their full attention to the abandoned pet.

“She was so skinny,” Flynn said. “You could count every bone in her body practically, even see her skull. It was sunken in. That’s how bad she was.”

The shelter staff quickly alerted their office manager that the dog in their care was in desperate need of assistance. The manager immediately arranged transportation to the better-equipped Howard Beach Animal Clinic.

Athena’s recuperation so far has been remarkable. “I saw her five days later, and she was amazing,” said Cynthia Egido, a longtime shelter volunteer. “She was walking around, she was alert and eating well, gaining back her weight. I mean, they’re taking excellent care of her and loving her and giving her what she needs.”

Bobbi and the Strays was founded in 1998 by Roberta “Bobbi” Giordano as a non-profit, no-kill animal rescue group.

In addition to various sorts of assistance, the shelter offers extensive medical procedures for the animals they assist, such as spaying and neutering, vaccinations, and care for animals with unique requirements.

“Bobbi and the Strays have saved thousands and thousands of cats and dogs,” Egido said, “especially in abusive situations like this, but this is one of the most severe ones we’ve ever seen. It’s amazing the dog is still alive. She was in very bad shape.”