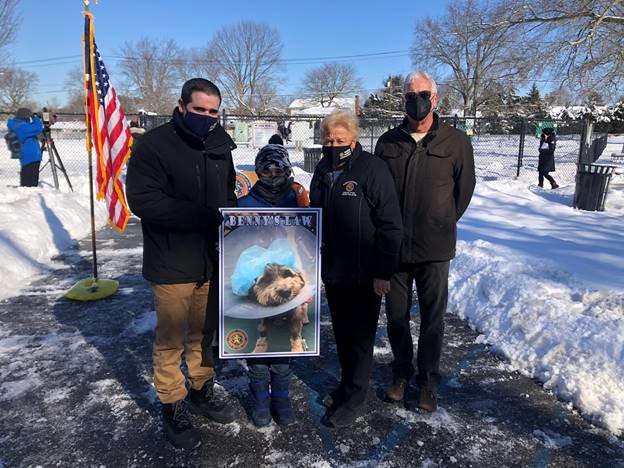 Nassau County Legislator John Ferretti, of Levittown, left, was in Eisenhower Park, in East Meadow, on Monday announcing legislation to create a public database of dogs that attack people or other animals. He was with Johnny, Legislator Rose Marie Walker, of Hicksville, and Gary Rogers, president of the Nassau Society for the Prevention of Cruelty to Animals.
COURTESY LEGISLATOR JOHN FERRETTI 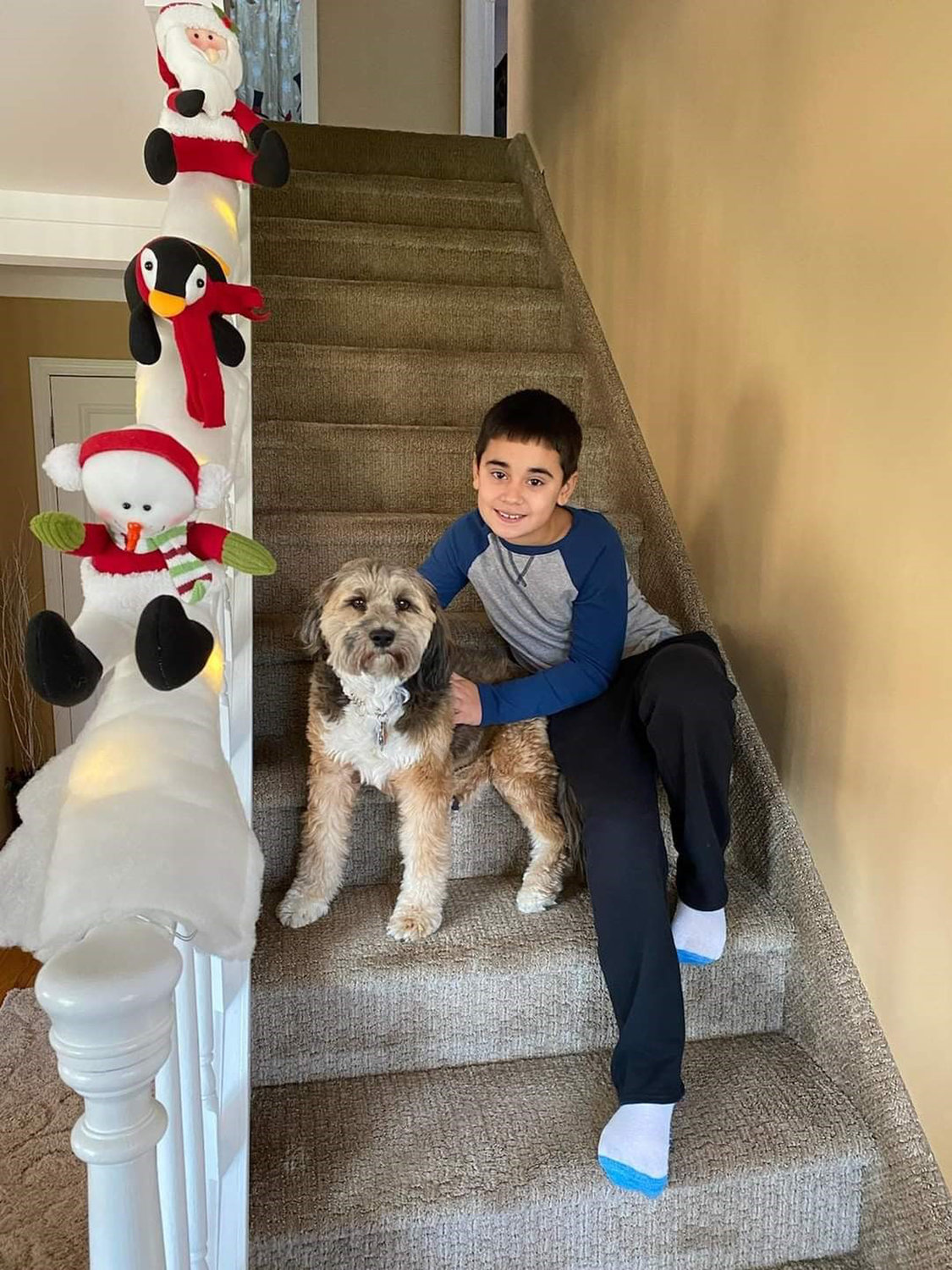 Johnny Ferretti, 8, with his 4-year-old Tibetan terrier, Benny, the inspiration for the legislation after he was attacked by a neighbor’s dog.
COURTESY LEGISLATOR JOHN FERRETTI
Previous Next
By Brian Stieglitz

Nassau County Legislator John Ferretti, a Republican from Levittown, has proposed a county law that would require overly aggressive dogs to be added to a public online registry.

Ferretti an-nounced the legislation in Eisenhower Park, in East Meadow, on Monday, accompanied by Legislator Rose Marie Walker, a Republican from Hicksville, and Gary Rogers, president of the Nassau Society for the Prevention of Cruelty to Animals.

Ferretti, who represents Salisbury and parts of East Meadow, has a personal connection to the legislation, which he said could prevent tragedies like the one that happened to his family. He recounted being outside his home on Nov. 4, 2019, with his  6-year-old son Johnny and their 2-year-old Tibetan terrier, Benny, when a neighbor’s dog raced onto their property and sank its teeth into Benny’s back. Ferretti and his neighbors tried to pry the dog off Benny, to no avail. Finally, when Benny stopped fighting, the dog released him.

Benny suffered five fractured ribs, bruised lungs, a fractured chest cavity and numerous lacerations. He has since recovered physically, but, Ferretti said, is still traumatized and cannot be around other dogs or go outside for long periods of time.

“Since that day when Benny was attacked, I continue to watch community members walk past that house with their pets and young children, unaware that a dangerous dog lives just steps away,” Ferretti said. “This legislation will help to keep residents safe and informed.”

The Town of Hempstead took possession of the dog that attacked Benny, whose breed and age were not identified, and brought the incident before a judge to determine if it was safe for the dog to be returned to the community. The dog was deemed “dangerous” by the judge but returned to the owner, and the case is kept in a private town registry.

Ferretti’s proposed legislation, dubbed Benny’s Law, would require owners of dangerous dogs to send notices to everyone living within 1,000 feet of them — about six blocks. The notice would be required to include a physical description of the dog, the date on which it was deemed dangerous and the address of its owner.

The Nassau County Police Department would also create a registry of dangerous dogs, and the Nassau SPCA would work with their owner to explain their responsibilities under the law.

A violation of the law would be met with a $500 fine, and an additional $100 for every day that its requirements were not met.

“I think this is a great step forward toward promoting accountability,” said Diane Madden, an animal rights activist from East Meadow.

Westchester County, and counties in more than 20 states, have similar laws. In Westchester, dogs are deemed dangerous if they injure a person or a pet, unless the dog was acting in self-defense and the victim was trespassing on its owner’s property or committing illegal activity.

“This law and this database will help protect not just our dogs and pets, but also our neighbors, from other dangerous dogs throughout the county,” Rogers said. “It will also give owners of dangerous dogs the information they need to help their pet and protect it and others from it.”

According to William Florio, a spokesman for Ferretti, the legislation “does not target a specific breed of dog” or needlessly expand the definition of a “dangerous” dog. It builds on existing state legislation, which requires dangerous dogs to be reported to the local municipality and added to a private registry. Ferretti’s law requires the information to be reported to the county, and makes it public.

“I must also remind residents that if you see an attack like this, or if your pet is attacked, please, call the police,” Ferretti added. “That is how this law is triggered, and that is how we can make sure our neighborhood pets are safe.”

The legislation was passed unanimously by the County Legislature’s Public Safety and Rules committees on Feb. 4. It will go before the full Legislature on Feb. 22.