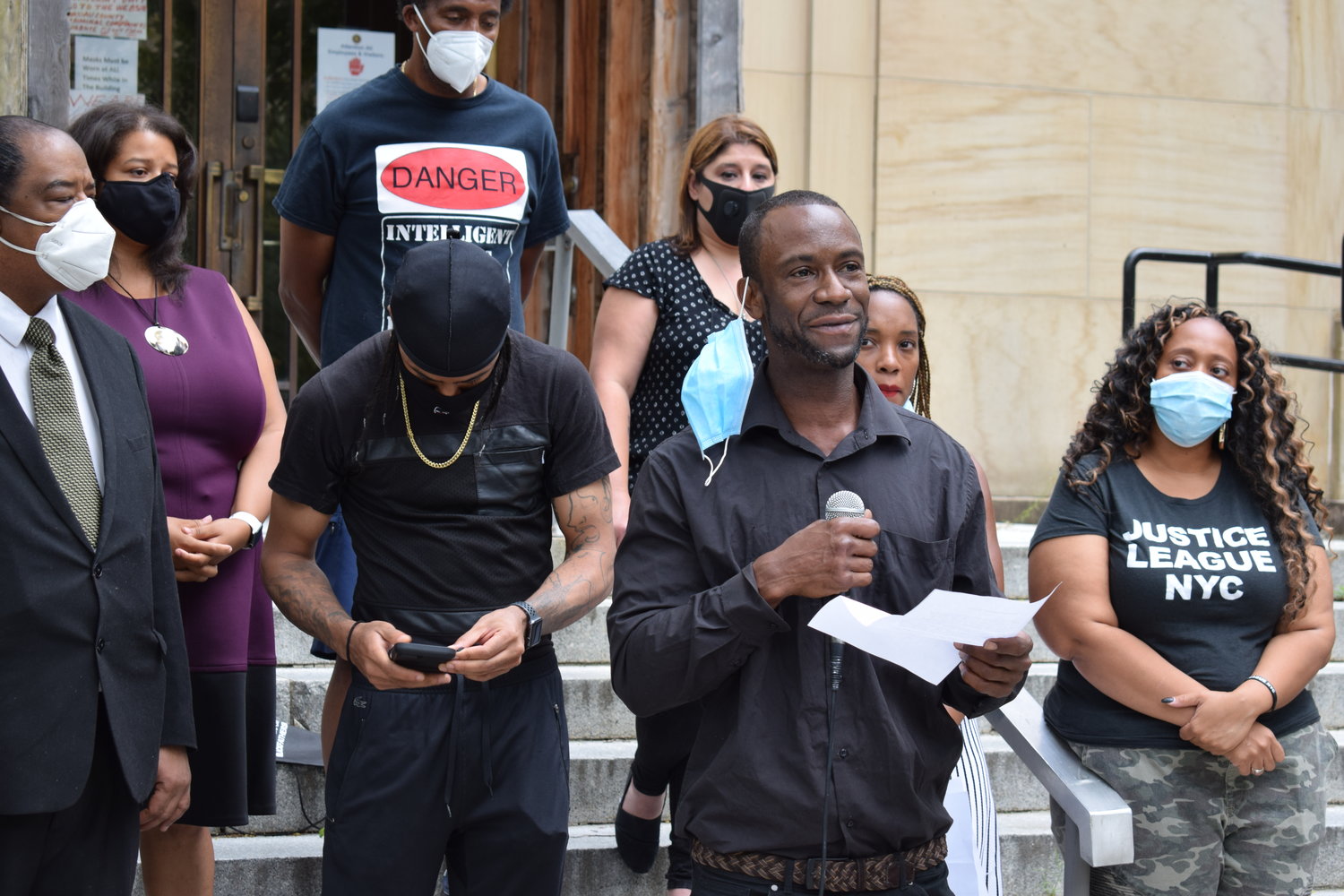 The Nassau County DA's office dropped the charges for assaulting an officer and resisting arrest on Akbar Rogers, who asked they do so during a protest in June.
Ronny Reyes/Herald
By Ronny Reyes

Nassau County District Attorney Madeline Singas said on July 7 that her office would not file charges against the seven Freeport Police officers who arrested Akbar Rogers, 44, on Dec. 3.

An independent review of the case — which was caught on video as officers chased Rogers over a fence, with two officers punching and kicking him — found that the officers operated within the law and policy in place.

The case was reviewed with help from Dr. Philip Hayden, a nationally regarded expert on the use of force by police.

Along with the decision, Singas also dropped the charges that Rogers faced for allegedly assaulting the officers and resisting arrest. At the time of his arrest, Rogers had a bench warrant against him for allegedly having pushed a pregnant woman to the ground and leading police on a high-speed car chase through the village. He was running from police when he was apprehended.

While the D.A.’s office and the Public Corruption Bureau said no criminal charges could be filed against the arresting officers, Singas said she found certain officers’ conduct during the arrest disturbing.

“The abusive language depicted in video of the incident, with an officer responding to Mr. Rogers’s assertion that he could not breathe with ‘F—k you,” and calling him a ‘[expletive]’ is reprehensible and warrants discipline,” Singas wrote in a statement on her decision.

Along with disciplining the officers, Singas urged the Village of Freeport to facilitate meetings between the local community and the Freeport Police Department. The village recently established a new community advisory committee to meet with residents and discuss how to provide better policing in Freeport.

Singas added that state and local officials should study police tactics and decide whether to pass reform laws on arresting practices to better protect both officers and the public from harm.

Greg-Patric Martello, whose law firm is representing Rogers in a $25 million lawsuit against the Village of Freeport and the Nassau County, said that while he is pleased certain charges dropped against Rogers, he disagreed with Singas’s decision not to charge the officers.

“We won’t see full justice until we hold the officers accountable over what happened,” Martello said. “Those officers did not act within the law. The law does not allow officers to brutalize, dehumanize and break someone’s wrist and shoulder. I urge the D.A. to review the case once again.”

Martello said justice for Rogers would only come if the officers are charged and the Village of Freeport is held accountable over what happened, and the village changes its training and policing policies.

Both Nassau County and village officials said they would not comment on pending litigation.

Nia Adams, of Jericho, who helped organize several protests demanding justice for Rogers, said she was pleased the charges against Rogers for resisting arrest and assault on the officers were dropped, but that she and her fellow protesters would continue to demand disciplinary action against the seven officers involved in the case.

“It shouldn’t have taken six months and a grassroots organizing effort to get these charges dropped,” Adams said. “The fact Akbar was ever charged in the first place, even though we had video of him being assaulted by those Freeport officers, shows as clear as day the racism and injustice within our so-called justice system. We’re glad Akbar’s name will finally be cleared, but this case isn’t over until the officers involved are fired and charged.

“And this movement,” Adams continued, “isn’t letting up until we achieve justice for all the ‘Akbars’ across Long Island, which can only happen by fundamentally changing our approach to public safety.”