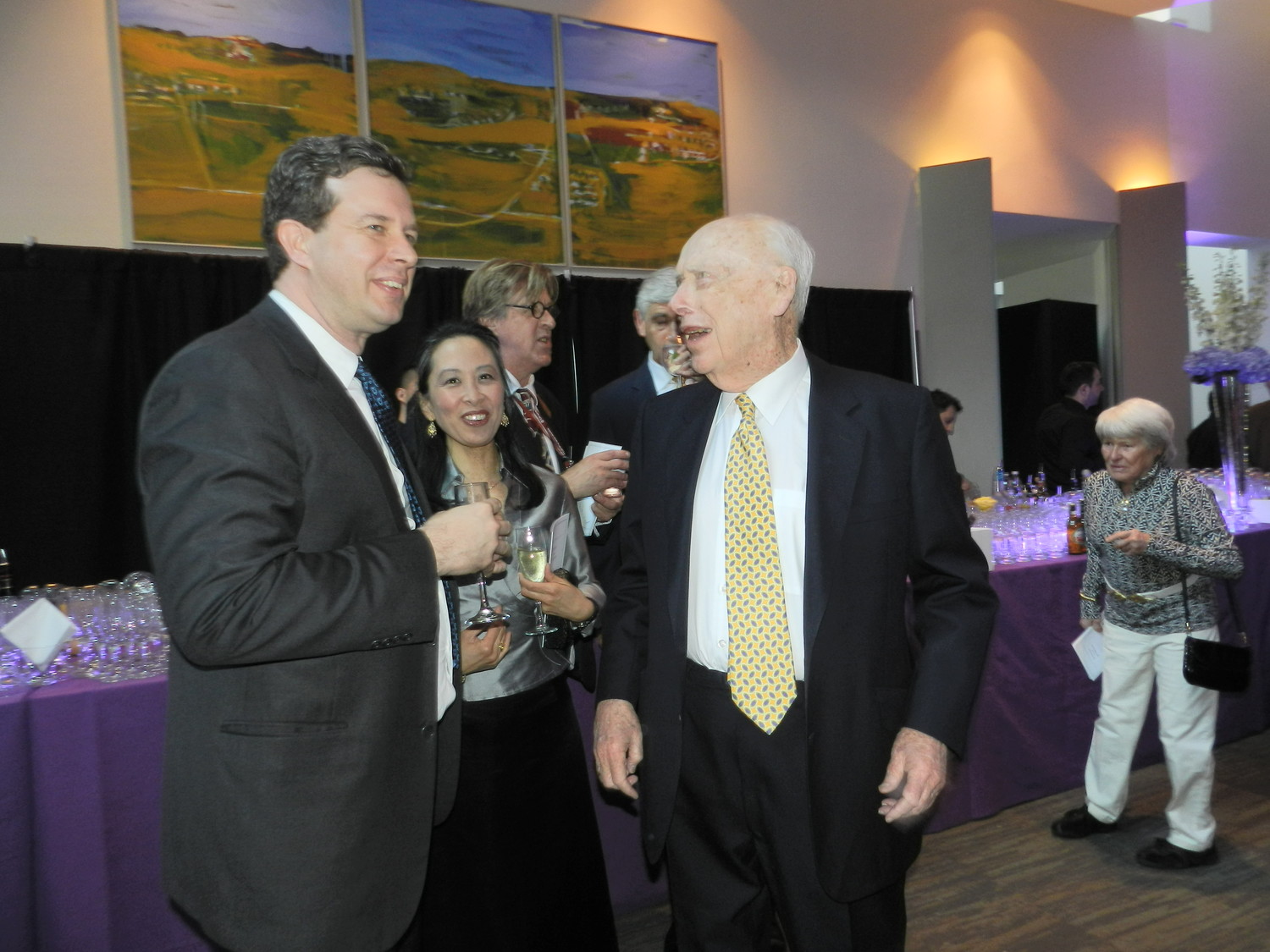 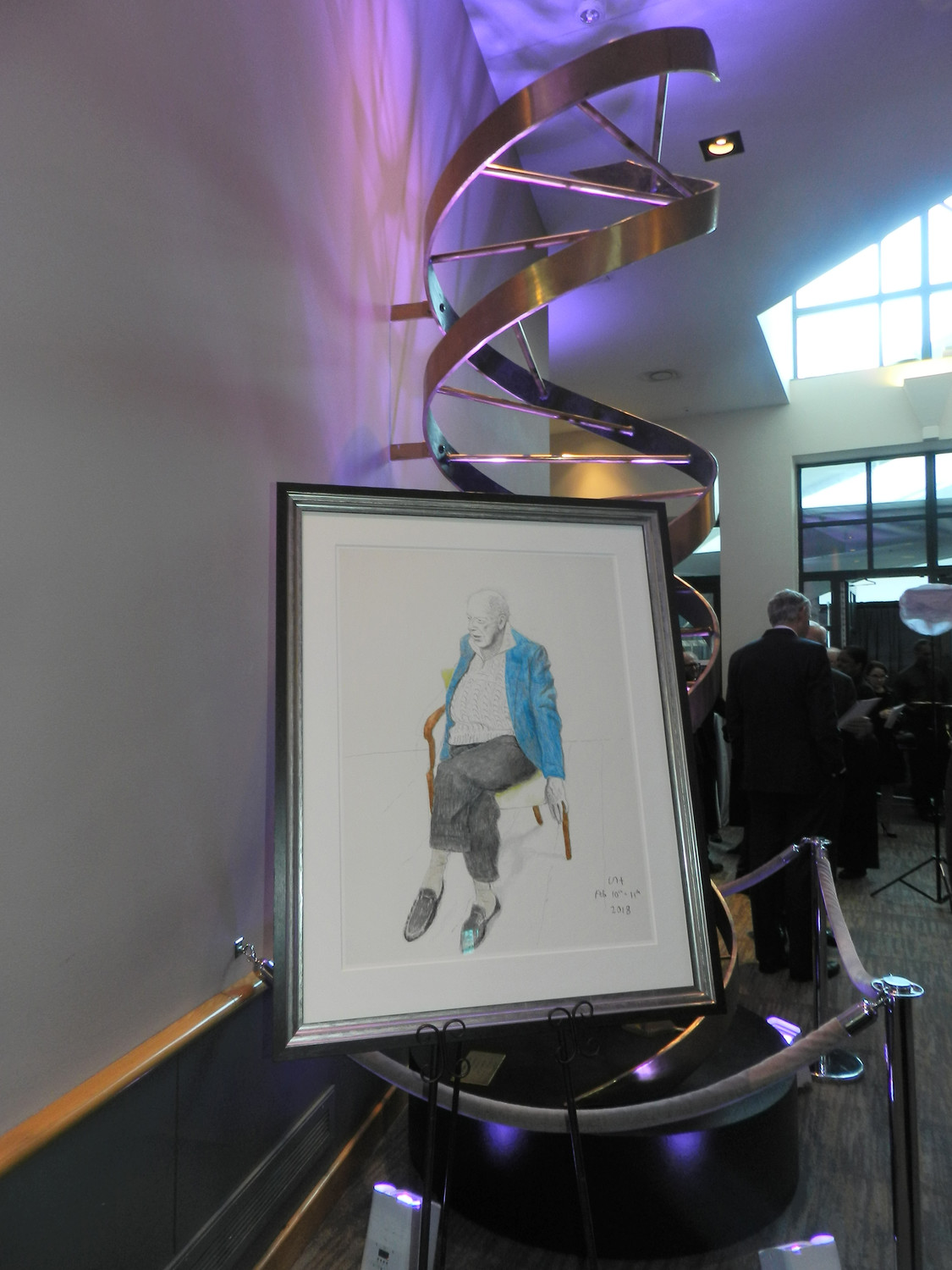 A drawing by David Hockney depicting Dr. Watson, alongside a steel structure of DNA, was displayed in the cocktail area during the party.
Alyssa Seidman/Herald Gazette 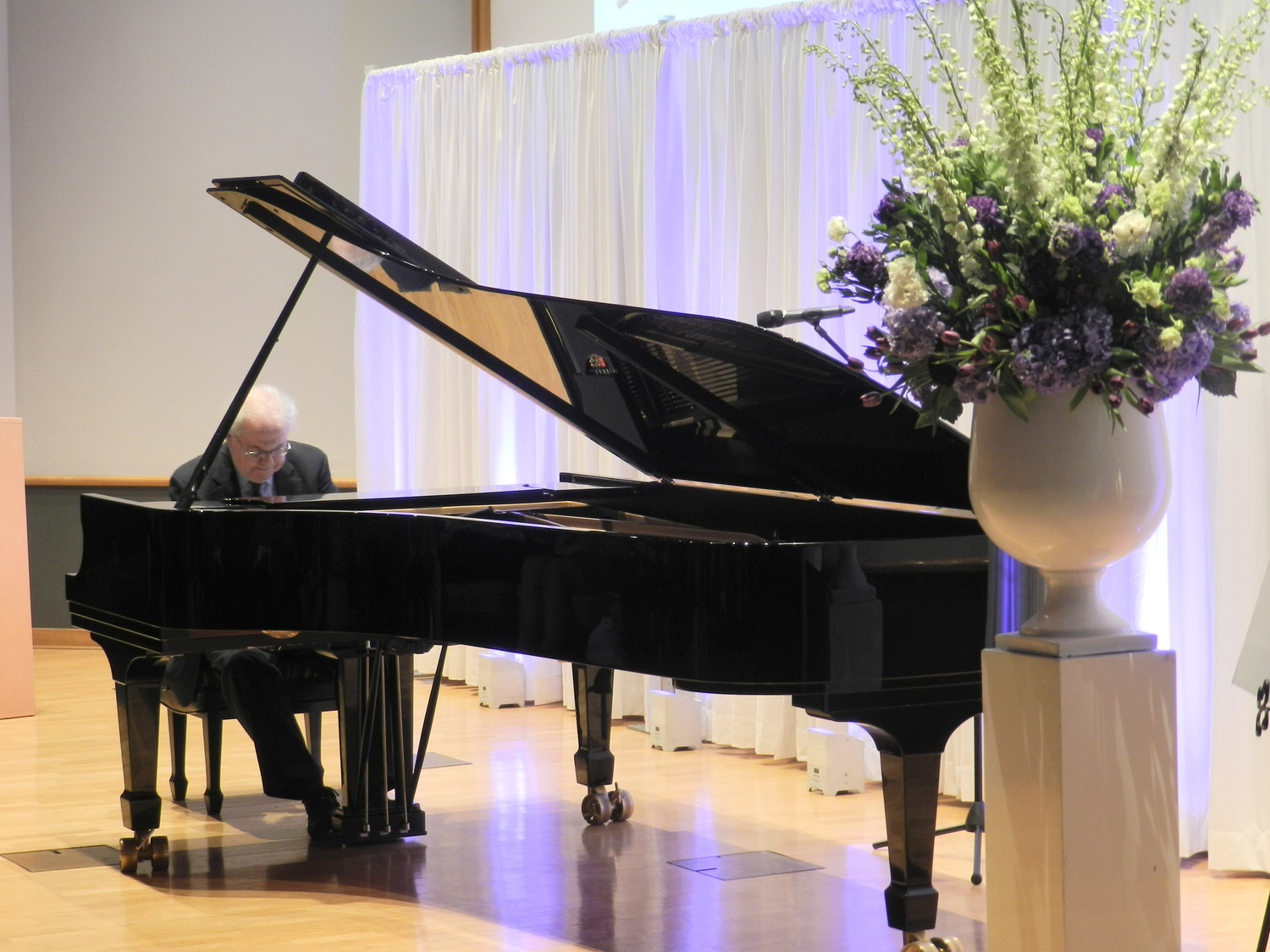 Galileo. Charles Darwin. Albert Einstein. Jim Watson.Bruce Stillman, the president of Cold Spring Harbor Laboratory, remarked that these individuals had all but one thing in common — their longevity. Watson celebrated his 90th birthday on April 6. Stillman attributed Watson’s long life to his “great genes and DNA.”

The lab honored Watson, the Nobel prize-winning scientist who co-discovered the double helix structure of DNA, with a lavish dinner gala on Friday night. Over 350 guests gathered in the Grace Auditorium for a special concert featuring acclaimed pianist Emanuel Ax, who dedicated his performance to Watson as a gift.

Nobel laureates traveled from all over the world to celebrate Watson’s achievements both in life and in science. As director of the laboratory, he worked to expand funding, and shifted the lab’s emphasis to cancer research, which has positioned Cold Spring Harbor to emerge as a leading education center in molecular biology.

This focus piqued the interest of Bill Miller, a British-born businessman who sat on the board of pharmaceutical company Bristol-Myers Squibb until the late 90s. “We had developed a relationship with Cold Spring Harbor, which works very much in the cancer area, and is an area of prime interest to us,” he said.

His relationship with Watson prompted the company to develop a program that has assisted in the lab’s critical cancer research. “Like everybody else I’m a fan of the man because he is absolutely remarkable,” Miller said.

In addition to cracking the code on DNA and championing the war on cancer, Watson established and directed the Human Genome Project under the National Institutes of Health, the largest biology project ever commissioned. In 2007, he became the first person to have his full genome sequenced. It took four months and $1 million.

Through NIH, Watson met many other groundbreaking scientists, including James Darnell, a biologist who made significant contributions to RNA processing.

“Jim liked what I was doing,” said Darnell, adding that with the DNA structure completed Watson became interested in RNA. “I was working on an RNA virus, a polio virus, and that had caught his eye.”

Watson, Darnell said, has always been ahead of the helix. “He’s only two years older than me, but he was a league ahead of me and already accomplishing the structure when he was 25,” he said. “He’s the greatest scientist that the U.S. has ever produced, and he’s the only man I’ve met in all these years who will be remembered 500 years from now.”

“Jim has revitalized the lab as an innovative scientific leader,” Stillman said. To honor his accomplishments, the proceeds raised at the celebration through underwritings and gifts will support an endowment fund for a future Distinguished Professorship at the laboratory in Watson’s name.

William Isacoff, a close family friend, said the honor was well merited. “His discoveries have changed the world,” he said. “Mankind owes him a great depth of gratitude.”

Though Watson declined to talk to the press on his big day, a quote from the evening’s program tells much about the man behind the microscope: “We must believe strongly in our ideas, often to the point where they may seem tiresome and bothersome and even arrogant to our colleagues. We must continue to work in the humane spirit in which we were fortunate to grow up. If so, we shall help insure that our science continues and that our civilization will prevail.”