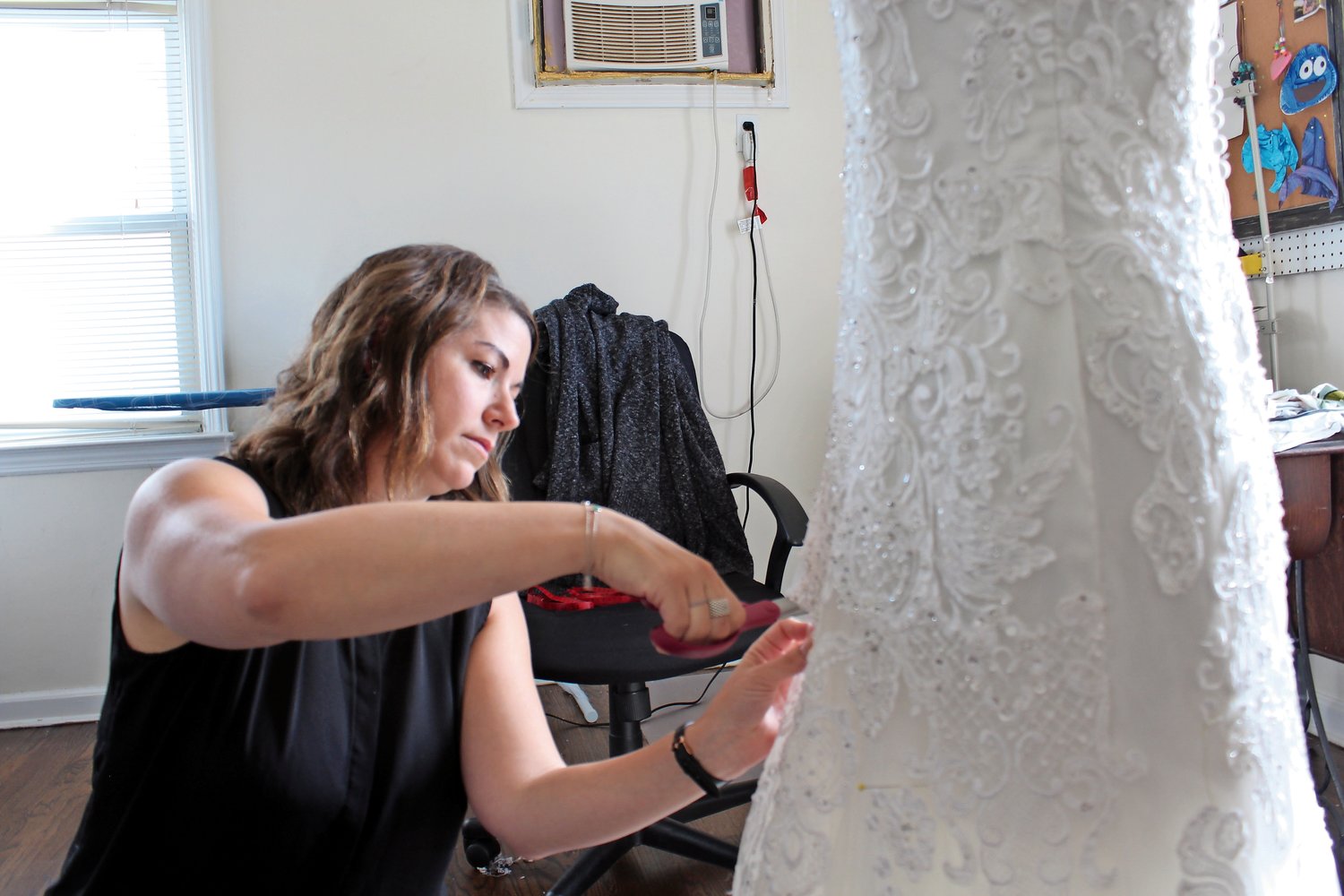 Cat Munzing cut a client’s dress, the first step in repurposing it to create a christening gown for the woman’s daughter.
Briana Bonfiglio/Herald 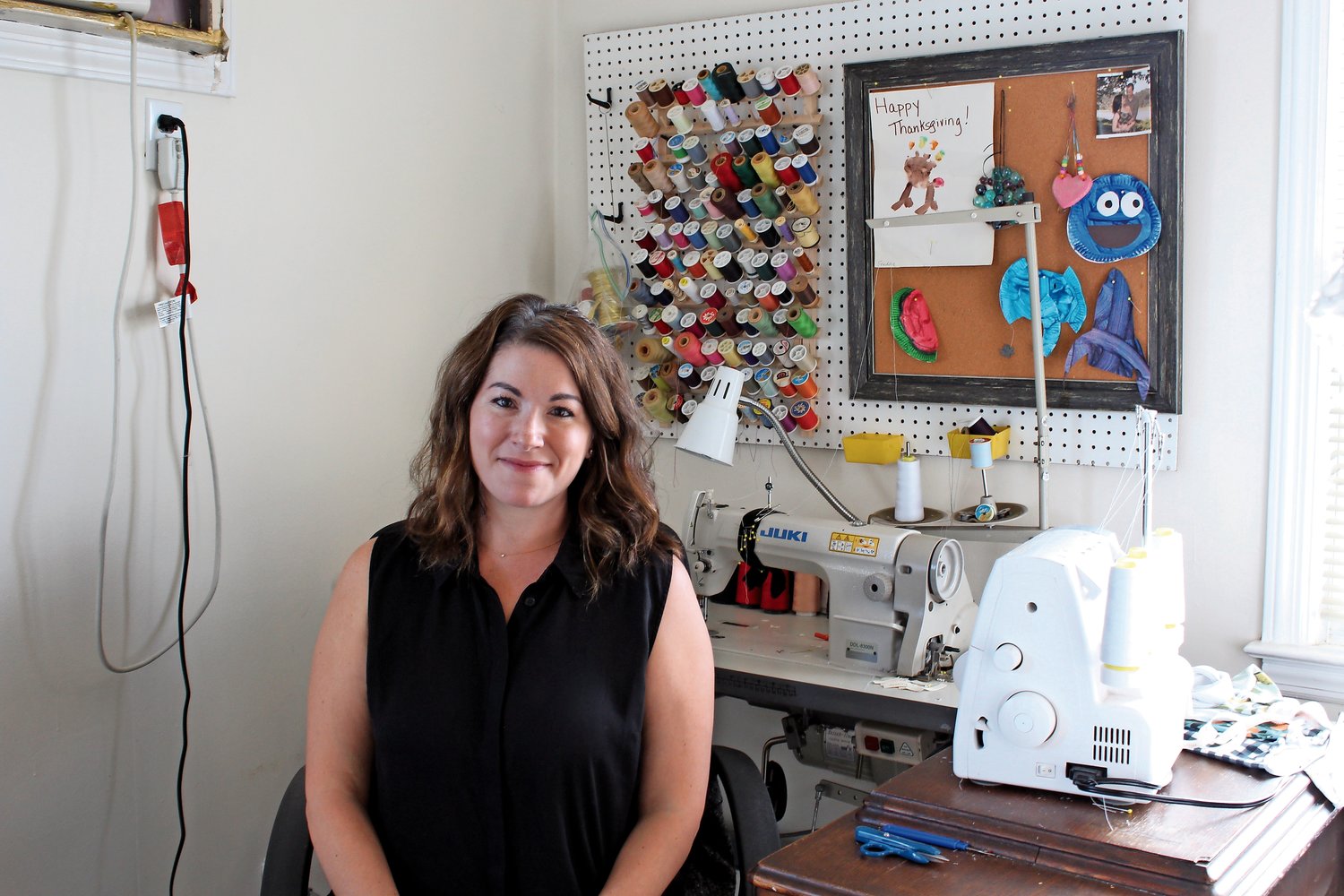 Cat Munzing, a Lynbrook native who now lives in Oceanside, is making a name for herself as a dressmaker.
Briana Bonfiglio/Herald 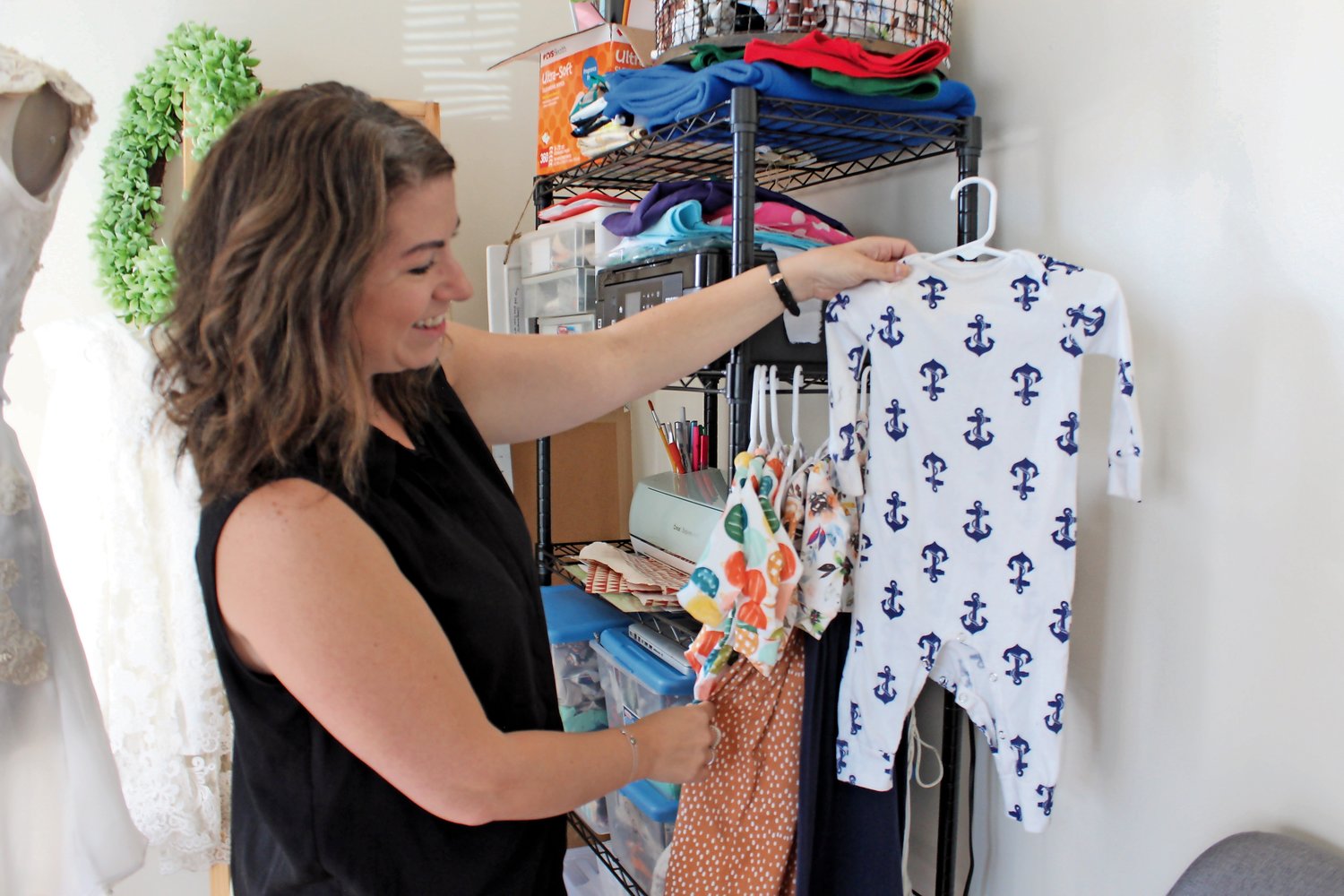 Munzing made an Oceanside Sailors baby onesie for her second son, Freddie, who is now 3.
Briana Bonfiglio/Herald 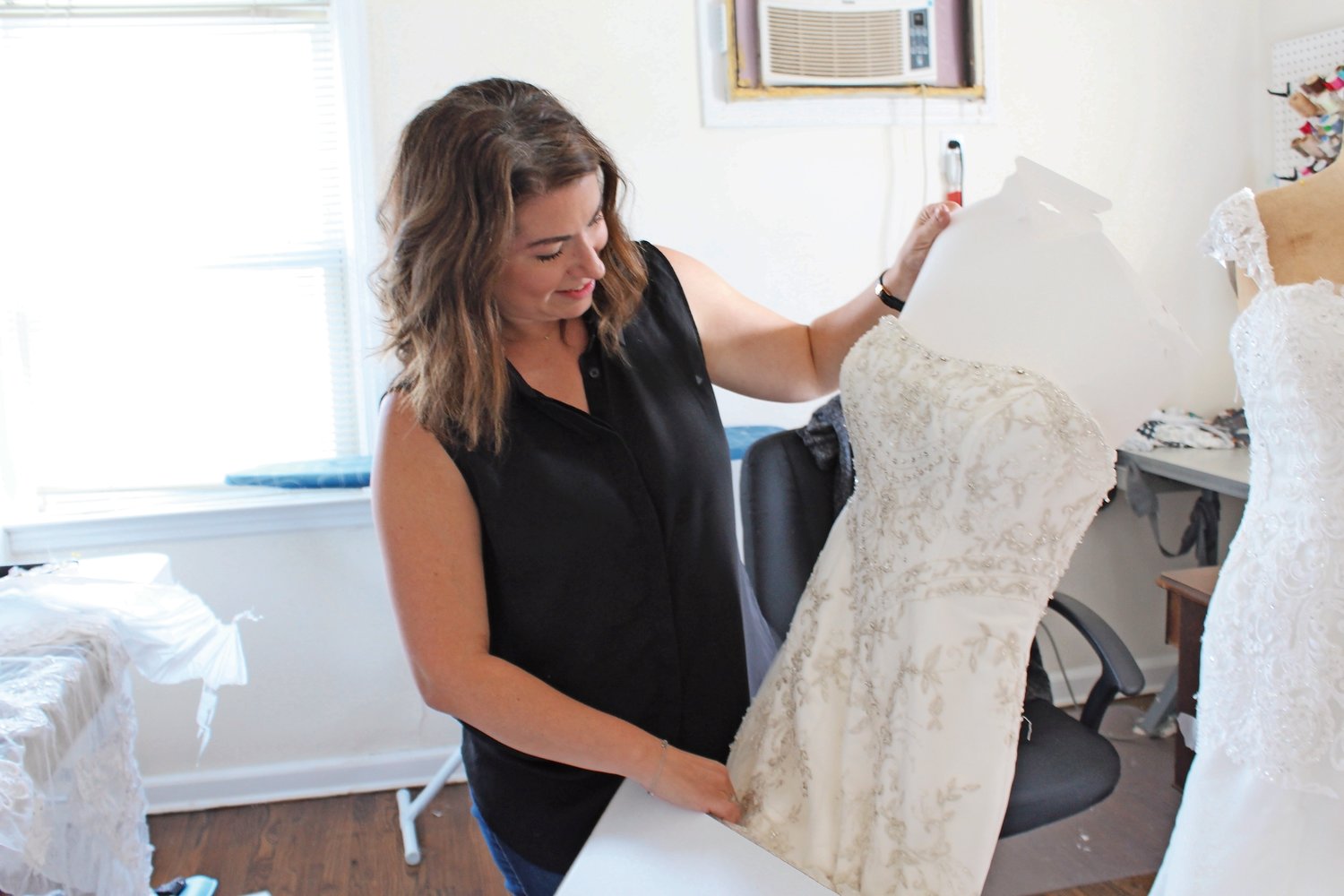 “I don’t remember it being this glitzy!” Munzing said as she took her wedding dress, which she wore down the aisle eight years ago, out of its box.
Briana Bonfiglio/Herald
Previous Next
By Briana Bonfiglio

On a bright October morning, Cat Munzing, an Oceanside mother of three, snipped away at an old wedding dress wrapped around a mannequin. Her sons, Wesley, 5, and Freddie, 3, were at school, and her 3-month-old daughter, Ruby, napped in the arms of Munzing’s father, Paul Kuehn, in the living room down the hall.

In these quiet moments, Munzing retreats to the naturally well-lit spare bedroom in the front of her house and sews. She makes custom children’s dresses, soft baby clothes and keepsakes such as teddy bears, memory blankets and pillows. Most of her business comes from word of mouth or social media, and sometimes, she said, she works craft fairs and sells clothes under the business name Munzy — “like little Munzing,” she said.

“I try to make as much time for it as possible,” she added, “because, besides my family, it’s the thing I love most in the whole world.”

On this day, Munzing, 36, worked on her favorite project: turning a mother’s wedding dress into her daughter’s christening gown. Kneeling on the wood floor, Munzing, wielding a measuring tape and scissors, cut around the circumference of the skirt — about 26 inches up from the bottom.

Then she pulled the ring of fabric up and over, detached it from the bottom layers and placed it on her small cutting counter, just below a whiteboard where she lists project requests. This piece of beaded lace would become the top layer of a baby’s gown, mirroring the dress her mother got married in.

By this point, Munzing has envisioned the dress’s features. Sometimes, a bride will want certain parts of the dress used. Other times, Munzing has free creative rein. “I think keeping special pieces in the family and passing them down is so amazing,” she said, “and then this isn’t just sitting in a closet somewhere.

“As many elements as I can take and keep like the [original] dress, I pass down to the dress for her daughter,” she continued, “because that’s why they’re doing it, and I know how hard it is to hand your dress off to somebody to slice up.”

The entire process could take two days, and most of it is spent cutting and planning. Then, Munzing goes layer by layer, sewing it until a new, full dress is born of the old one. “‘I can’t believe it’s my dress’ is what a lot of people say,” Munzing said.

“What’s really cool about this is you can see how all different kinds of dresses are constructed,” she said, excitedly.

Munzing grew up in Lynbrook, where her mother, Donna Kuehn, crafted in the basement and showed her how to use tools like a glue gun, she said. When Munzing was in high school, her mother taught her to sew, and she made bags for her friends. In college, Munzing did alterations, which she still does now.

Munzing graduated from the University of Scranton with a bachelor’s degree in business in 2005. A few years later, she completed a two-year apparel design program at Nassau Community College.

After a stint working in fashion, she is now a customer relations manager for a jewelry company in Queens. She is approaching the end of her maternity leave and will return to work full-time next month — sewing in the early mornings, late nights and weekends. For now, though, naptime for Ruby is sewing time for Mommy.

“The kids love to watch her sew,” said Munzing’s husband, Chris, who noted that people come from across Long Island for her work. “I’m just in awe of how hard she works.

“And it’s rewarding to see her doing something that I know she’s passionate about,” he continued. “Those ‘big reveal’ moments where she helps reconnect someone to their own family history are as special for her as they are for her client.”

In November 2017, Franzese had just moved to Rockville Centre and found the dress in a bag that she took from her mother’s basement when she died a few years ago. Her mother had thought the dress was gone, so Franzese was not expecting to discover it.

Her best friend and the godmother of her daughter recommended Munzing. In February 2018, Franzese’s daughter was born, and she had Munzing make her baptism gown.

“It was one of the most easy, intimate and personalized experiences I’ve had with someone making something for me,” Franzese said. “The entire dress was made from my mom’s dress. She didn’t use any extra fabric.

“I’m not an emotional person, but it was very emotional,” she continued. “We had a fitting, and I showed up with the godmother and put the dress on [my daughter.] It was very special.”

Now, Munzing is jazzing up a christening gown for her own daughter. Ruby will be baptized in the same gown that Munzing made for her two sons’ baptisms — but this time, she is adding elements from her and her mother’s wedding dresses.

“Her dress might be a mish-mosh, but I’m hoping it looks nice all together,” she said, eyeing her wedding dress. “There’s definitely things from here [I can use], cut out some of this … take from the veil, put it around the edge…

“It’s so much fun,” she said later on. “A lot of people are like, ‘You have three kids, and you work full time…’ but you make time for the stuff you love to do.”