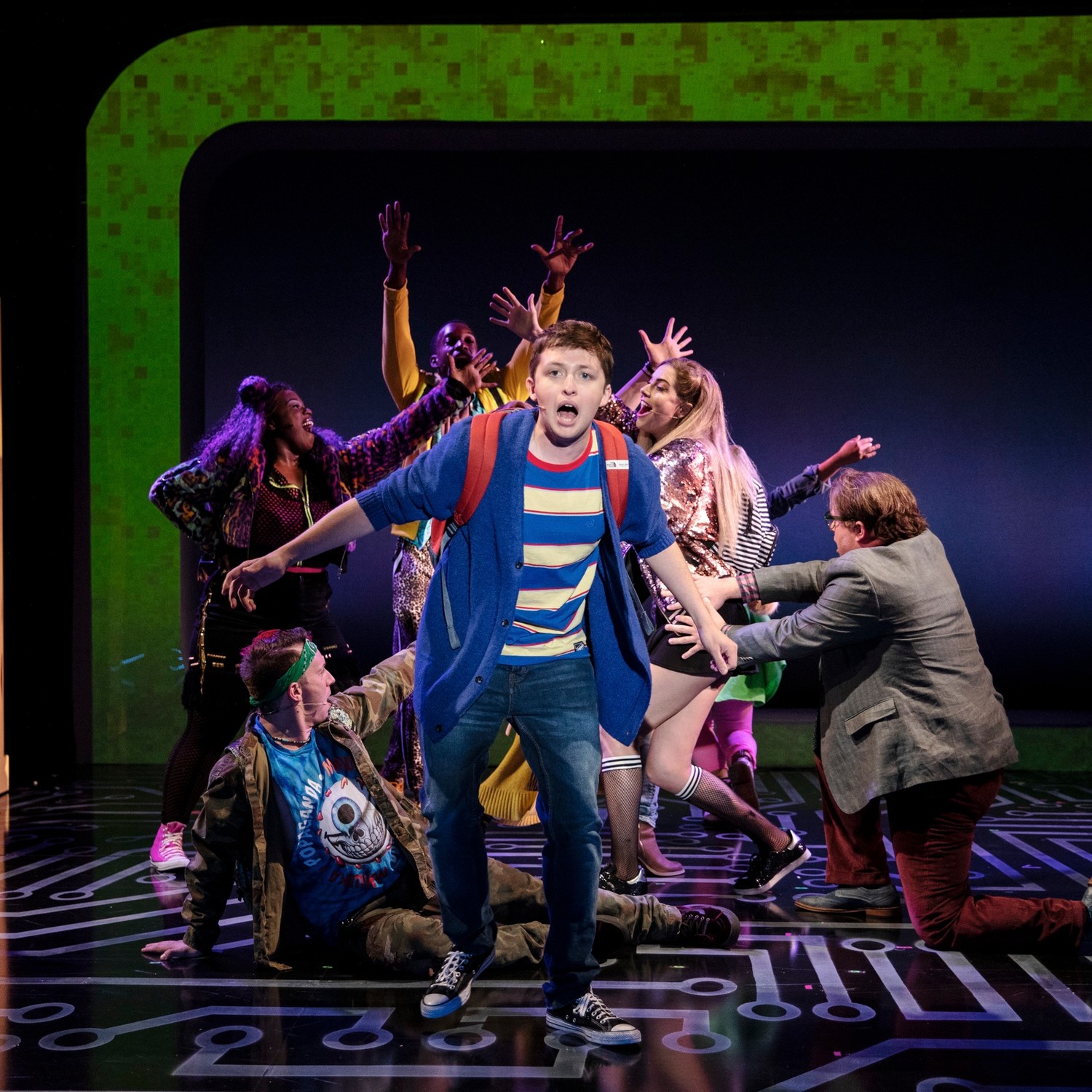 The cast of “Be More Chill,” based on Ned Vizzini’s cult sensation novel about coming of age in the digital age.
Courtesy Maria Baranova
By Iris Wiener

In ‘Be More Chill,’ an unparalleled new Off-Broadway musical sensation currently taking New York by storm, teenaged outsider Jeremy Heere partakes in an honest, yet hilarious journey through a high school’s minefield to find his authentic self. Much like Jeremy, the actor playing him has an enormous heart. However, Will Roland says that he had to make it through his formative years in Locust Valley before he truly understood what it means to be a good person.
A graduate of Friends Academy, Roland remembers occasionally “forgetting about my heart” and being a bit of a bully.
“I was mean in ways that I didn’t intend to be, but in hindsight I was like, ‘You shouldn’t have said or done that,’ he recalls. In ‘Chill,’ Roland is anything but a bully. The video game loving drama nerd whom he plays ingests a pill-sized computer, or Squip, that promises to make him the epitome of cool. The result is a voice inside of his head telling him what to do to win the affection of his crush, Christine, and how to interact with jocks, bullies and hot girls.
“Jeremy’s desire to help [himself and others] is real but he’s so misguided,” says Roland of his character’s motivations. “He couldn’t be more wrong in the way that he goes about it, which I think is a valuable lesson in the play.”
Roland has learned many of his own valuable lessons through a journey with ‘Chill’s’ musician and lyricist Joe Iconis that dates back to when they first met in 2007. The introduction led to their collaboration on Iconis’ ‘The Black Suits’ (which also featured Roland’s future ‘Dear Evan Hansen’ castmate Ben Platt). Soon Roland was asked to give voice to the character of Jeremy’s friend Michael Mell in Chill’s very first reading in 2013. Ironically, after auditioning for ‘Chill’s’ initial production for New Jersey’s Two River Theater in 2015, he made it to the last round of callbacks and did not get cast. “Three years elapsed, and [instead] I spent that summer in D.C. doing a little show called ‘Dear Evan Hansen.’ It ended up going really well for me,” he jokes, name-dropping the six-time Tony Award winning musical.


It was this past spring when he received a call from Iconis asking him to lead ‘Chill’ in its Off-Broadway incarnation.
“Iconis has said that he loves to write musicals about people who do not get musicals written about them,” says Roland. “In this case, you have 10 genius comedian character actors who are firing on all cylinders, accessing all of their delightful freakishness, and I think that is what a lot of people are connecting with.” He revels in the fact that the show “celebrates the weirdness in all of us,.”“This is a show that received a production based on the enthusiasm of its fans and the quality of its content,” he marvels. “It became obvious at some point that it would be a hit.”
Roland points to his 10 years as a camp theatre/arts teacher at Friends Academy as a factor that informed his work as ‘Chill’s’ Jeremy. “I taught so many Jeremys and Christines — so many young people who were sort of writhing in their own skin, and could only express themselves when they were pretending to be someone else,” he recalls. “Jeremy has this theatrical bent, he loves putting on this cool version of himself that allows him to speak more honestly and truthfully. He wants the world to be easy but he doesn’t know how to make it that way.”
“Philosophically, I am interested in playing characters who are three-dimensional and aren’t afraid to be ugly or weird. I’m very lucky in that I can’t fake it!”
This also worked to his advantage when he was brought on board Showtime’s ‘Billions,’ when he was asked to play a financial/computer whiz for three episodes.
When Roland isn’t bringing packed houses to standing, screaming ovations, he can be found watching Youtube videos on “weirdly esoteric topics…” and occasionally making his way out to visit his parents, who still reside in Locust Valley. (Roland Auctions, the business they own and for which he used to work, is in Glen Cove.)
“We live in such a screwed up world where everyone is so sad,” he adds. “Why must we always analyze the sadness of our world with equally sad content? Why can’t we attack our sadness with radical joy? ‘Chill’ does it so exuberantly and delightfully.”
Report an inappropriate comment