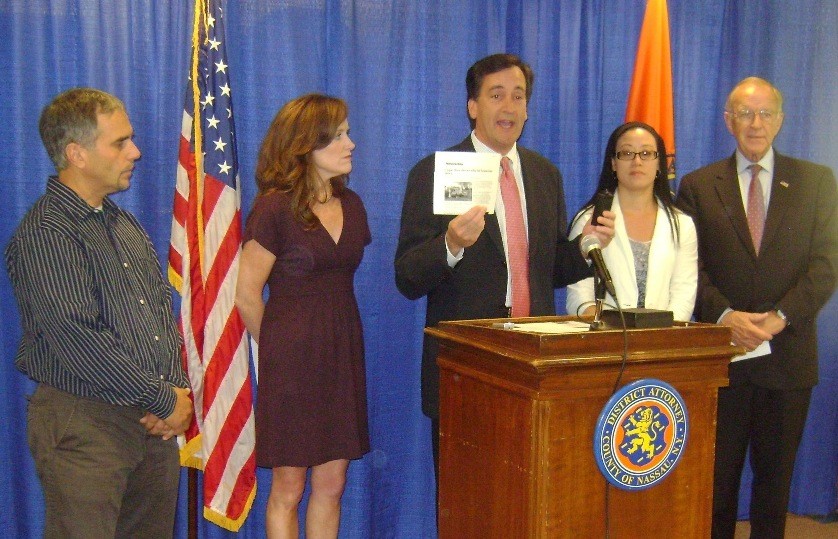 New York State Sen. Charles Fuschillo Jr., of Merrick, showed how an ignition interlock can be used to prevent a drunk driver from getting behind the wheel of a school bus. He was joined by, from left, Al Belbol Jr., co-president of the Levy-Lakeside Elementary School PTA in Merrick; District Attorney Kathleen Rice; Susan Walpole, co-president of the Mandalay Elementary School PTA in Wantagh; and Assemblyman David McDonough.
Courtesy Sen. Charles Fuschillo Jr.

A school bus recently carrying five small children crashed into a Syosset home after its driver passed out behind the wheel. The bus driver was charged with five counts of aggravated DWI under Leandra’s Law, endangering the welfare of a child, reckless endangerment and two counts of DWI.

The legislation, which is co-sponsored by Fuschillo and supported by Rice and McDonough, would require ignition interlocks to be used on school buses as a way to prevent drunk drivers from getting behind the wheel of a school bus. Ignition interlocks are breath test devices linked to a vehicle’s ignition system that prevent it from starting if alcohol is detected on the driver’s breath.

“School bus drivers literally hold students’ lives in their hands. We have strong laws to hold bus drivers accountable after they have been drinking; now we need to prevent them from even having the chance to drive drunk behind the wheel of a bus,” said Fuschillo who is chairman of the Senate Transportation Committee. “Requiring school buses to be equipped with ignition interlocks will provide a defense against drunk driving for children who can’t defend themselves.”

“Nothing is more important than the safety of our children, and this legislation will create a critical check to ensure that no bus driver endangers our kids by driving a bus drunk,” Rice said. “We know ignition interlock technology saves lives, and I’m glad to partner with Senator Fuschillo to support this important effort to keep our kids safe on the way to and from school.”

Last Wednesday, a school bus driver was pulled over on the Long