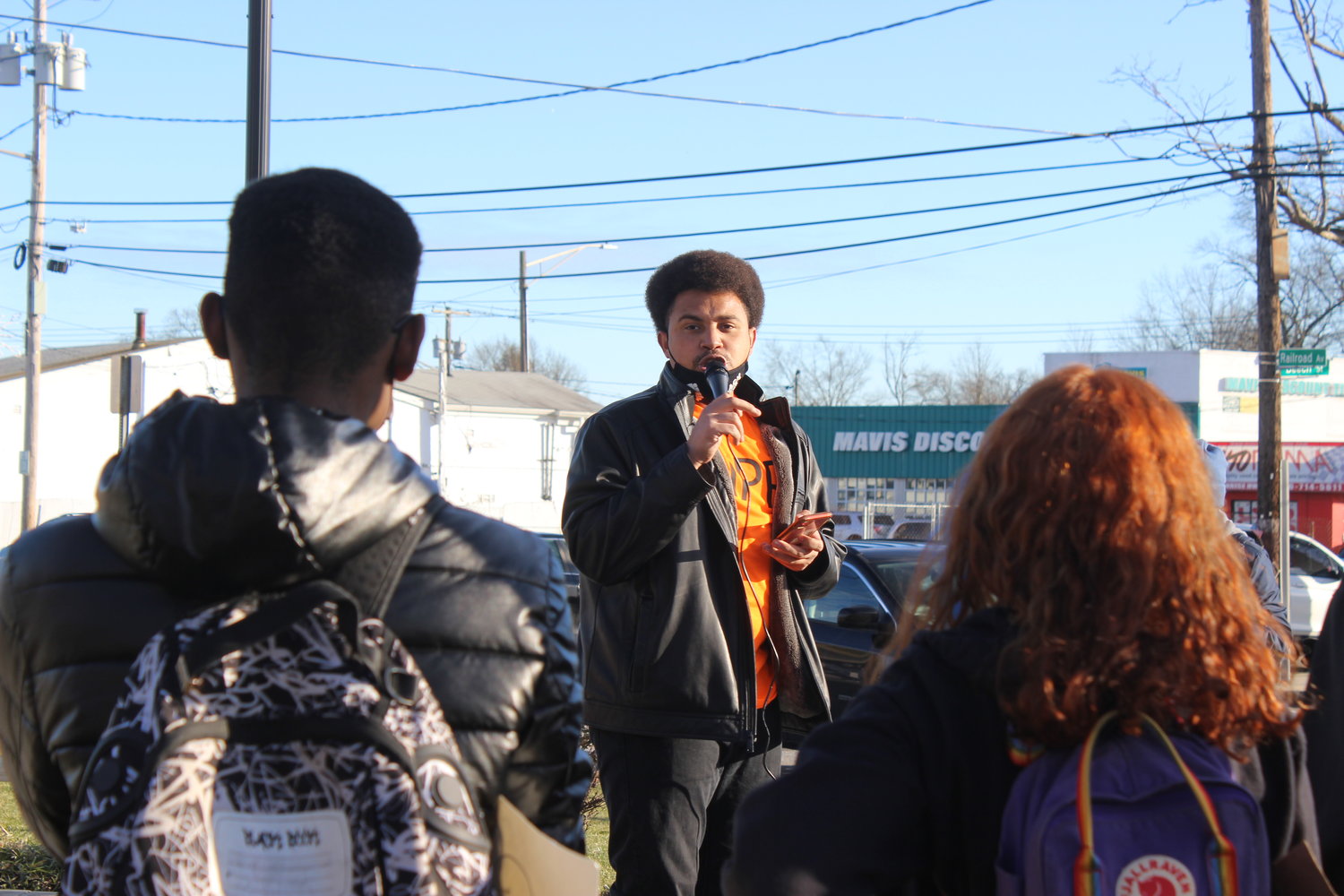 Black Lives Matter protesters gathered at the Wantagh Long Island Rail Road station last Saturday in response to the violence at the U.S. Capitol on Jan. 6. Terrel Tuosto, 28, of West Hempstead, addressed the group before they marched through Wantagh.
BRIAN STIEGLITZ/HERALD 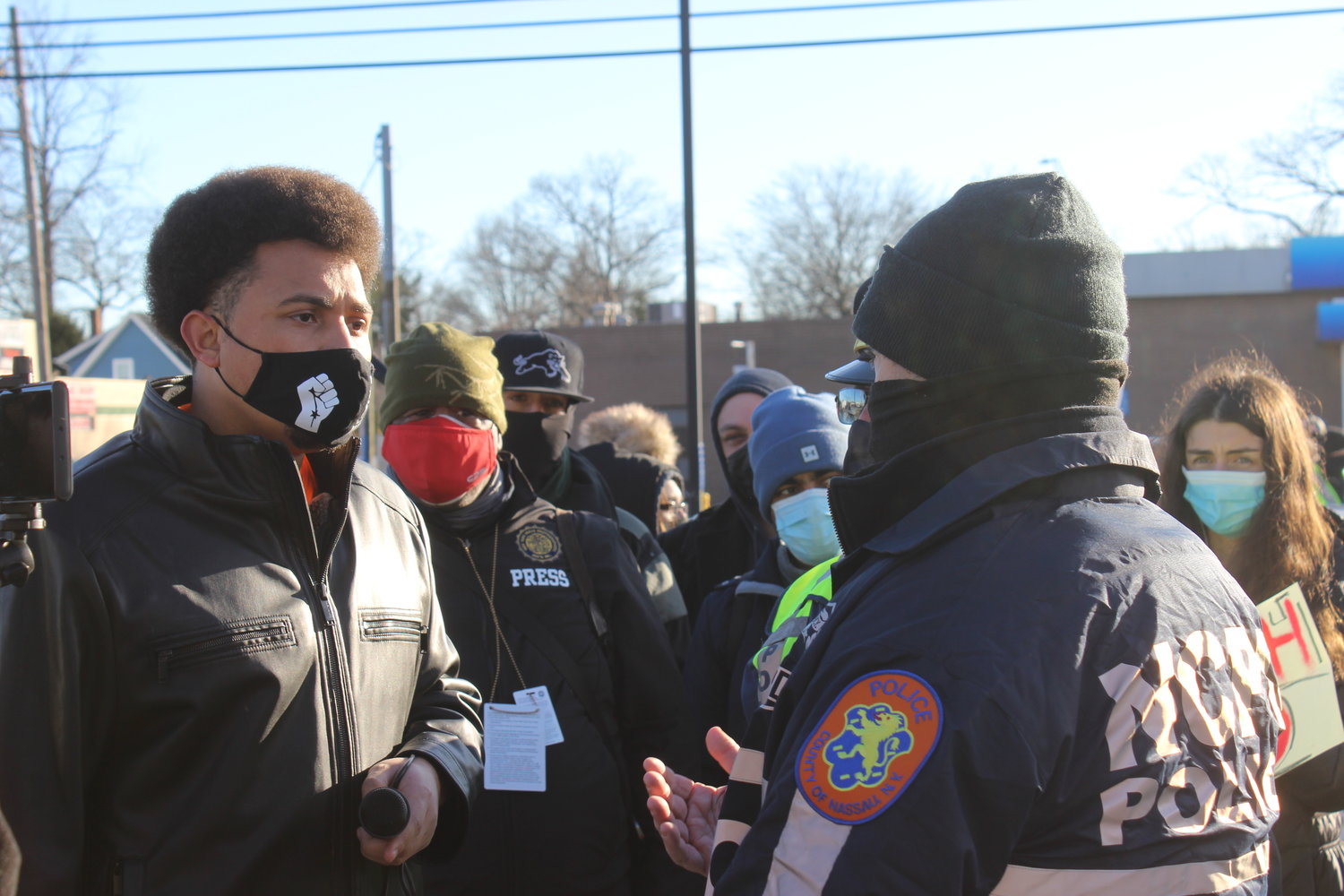 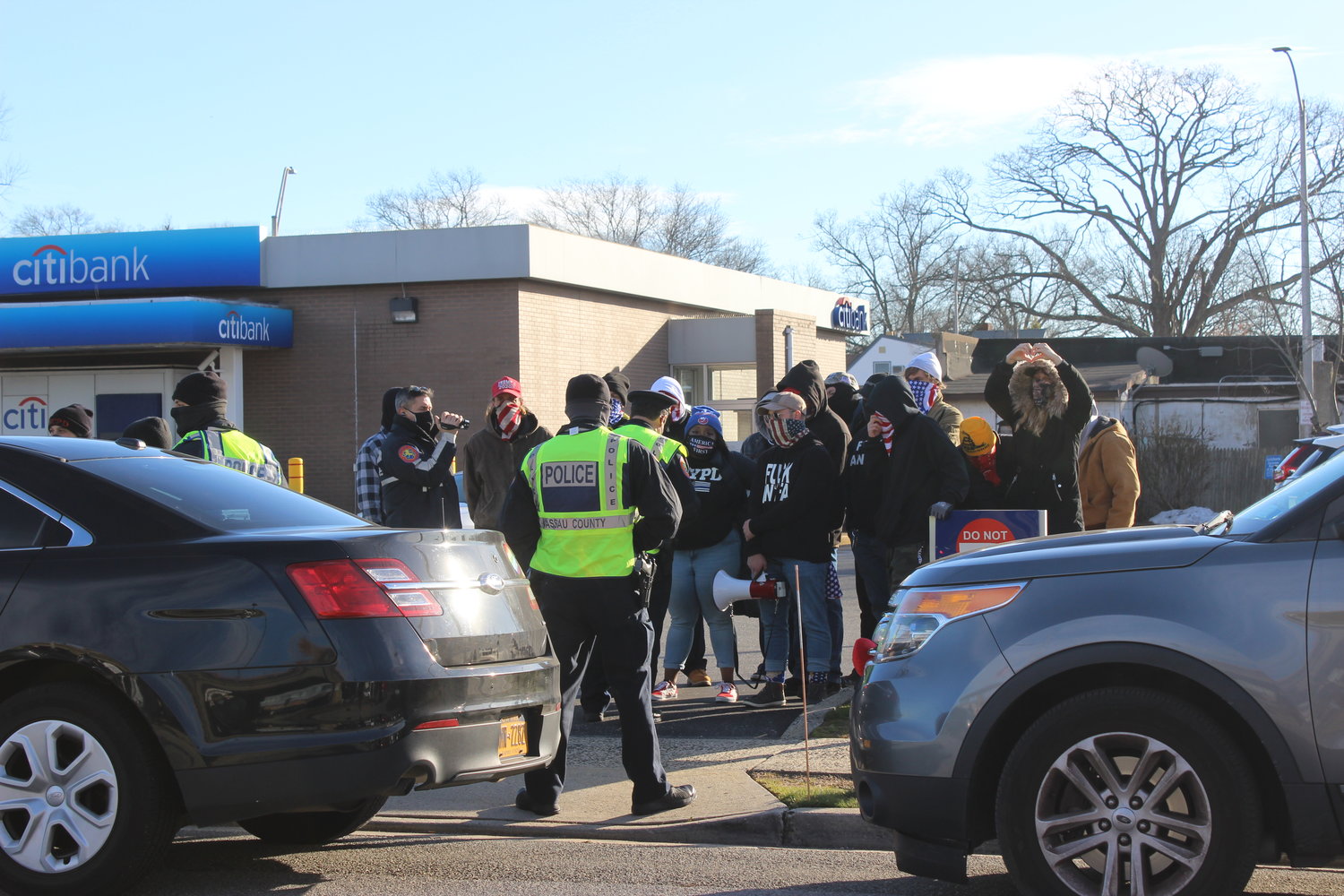 As Tuosto spoke, a group of about a dozen counterprotesters congregated across the street.
BRIAN STIEGLITZ/HERALD 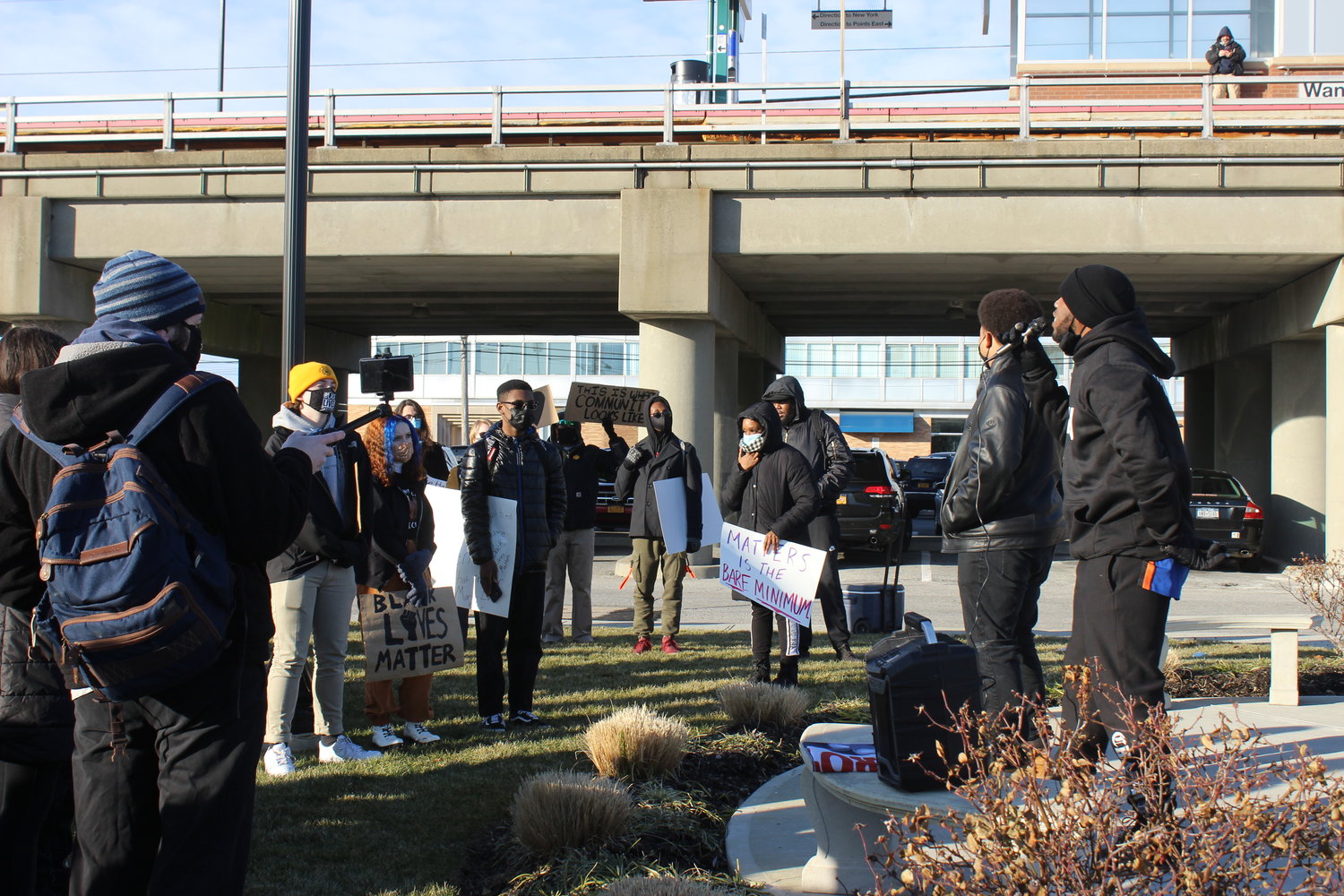 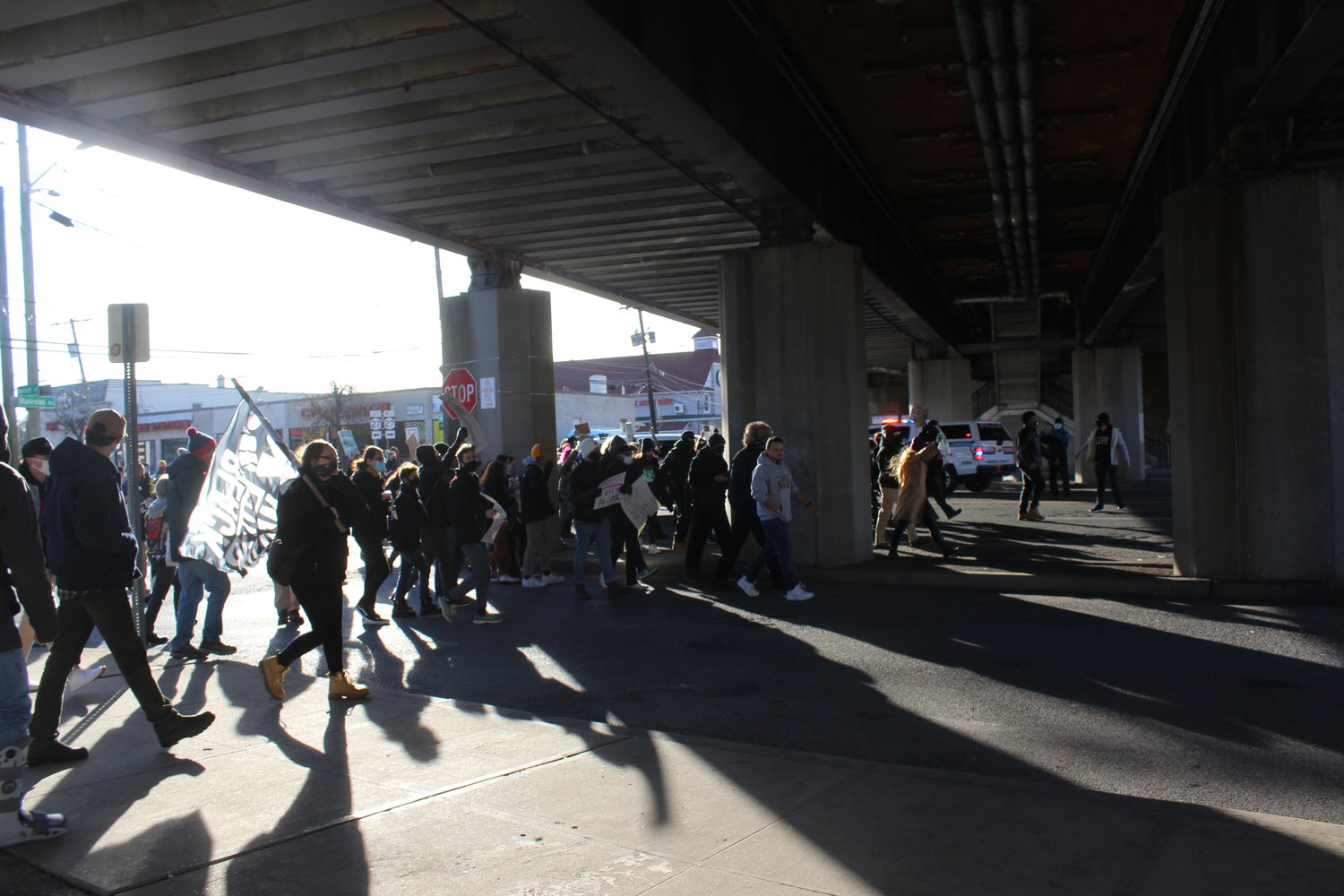 Two political groups faced off at the Wantagh Long Island Rail Road station on Saturday during a Black Lives Matter protest in response to the violence at the U.S. Capitol on Jan. 6.

Protesters were marching to condemn systemic racism and double standards in policing, they said, specifically in light of last week’s swarming of the Capitol by a mostly white crowd protesting the results of November’s presidential election.

“They want to take us back to a time when everyone else was under their boots,” Terrel Tuosto, 28, of West Hempstead, said of the demonstrators in Washington. Tuosto was one of the organizers of the Wantagh protest, which included members of the local activist groups Black, White, Brown United and Long Island Peaceful Protest.

As Tuosto spoke, a group of about a dozen counterprotesters congregated across the street and began chanting “All lives matter” and “This is what communism looks like,” among other phrases. The group carried a large “Trump 2020” flag, and most wore sweatshirts that said “F--- Antifa,” while others sported pro-police shirts and hats. Nassau County police separated the two groups on opposite sides of Railroad Avenue, in front of the LIRR platform.

Addressing the Black Lives Matter protesters, Tuosto brought up the reaction of many Trump supporters to Colin Kaepernick, a former quarterback for the San Francisco 49ers who in the 2016 NFL season took a knee during the national anthem to protest police brutality.

Many who disagreed with Kaepernick said he was disrespecting the American flag, Tuosto said. But some of the protesters who raided the U.S. Capitol building were seen removing an American flag and replacing it with a Trump flag, among other actions of vandalism. “Where is the outrage now?” Tuosto asked.

He encouraged the group to ignore the counterprotesters, and likened them to children screaming to get attention. “You don’t have to explain yourself to them or go back and forth,” he said. “That’s what they want.”

Before the group started marching, a Nassau County police officer explained to Tuosto that they could not block vehicular or pedestrian traffic and had to march on the sidewalk. They stepped off and began marching on Wantagh Avenue, before police officers began shouting that they would be arrested if they did not leave the street. Officers then shepherded the protesters and counterprotesters to the sidewalks on either side of the avenue, where both groups marched north.

Tuosto has led a number of marches on Long Island since George Floyd was killed by a Minneapolis police officer last May. Terrel and his brother, Tiandre, were arrested on June 12 at a protest in East Meadow for allegedly blocking traffic. Tuosto’s arrest was captured in a video, which later went viral on Twitter, that shows officers throwing him to the ground and pinning him to the pavement before handcuffing him.

Over the course of dozens of protests since then, Tuosto and his fellow organizers have been handcuffed, pinned to the ground and detained a number of times for similar infractions. Most of the incidents can be seen in videos on the Facebook and Twitter pages of Long Island Peaceful Protest.

Saturday’s march came after Tuosto resigned from the county’s Police and Community Trust and Community Collaborative Task Force — a subset of the county’s Public Safety Committee — along with several other members, over what they called a lack of inclusion or input in the county’s plans for police reform.

About an hour into Saturday’s demonstration, the counterprotesters left and the Black Lives Matter protesters continued into residential side streets of Wantagh. They marched until sunset and concluded back at the Wantagh LIRR station.