Annual festival celebrates the life and legacy of the pioneering entertainer 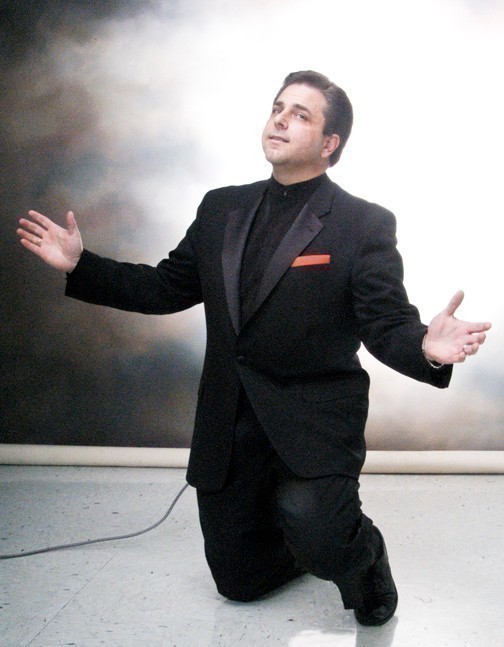 Vocalist Tony B sings the Jolson standards on bended knee, a la Jolson, during his two hour show during the festival.
By Iris Wiener

Any one of the one thousand-plus members of the International Al Jolson Society can attest to the fact that being a fan of Al Jolson is not just a hobby. In the words of radio personality and lifelong fan Joe Franklin, remembering and celebrating ‘The World’s Greatest Entertainer’ is “an eccentric art form.” The enthusiasm of Jolson’s fans will be on full display once again next Saturday, Aug. 16, in Oceanside, at the 18th Annual Long Island Jolson Festival, a full day of nostalgia, music, memorabilia, and laughs.

Jolson, who was a pioneer in music, in film, and on Broadway throughout the early 20th century, has captivated decades of fans through his energetic persona and rapport with an audience. Whether he was starring in the first talking movie [“The Jazz Singer”] or selling out shows at the Winter Garden Theatre [“Hold On to Your Hats”], he left a lasting imprint on his audience.

Franklin, who grew up naming Jolson as his idol, was also lucky enough to consider him a friend. “On one knee he brought the entire world to its feet. It was electrifying,” Franklin says of seeing Jolson perform. “He was the first man to loosen his tie and get friendly with the audience. In those days everybody yelled loud, they spoke loud, they always roared. Jolson was the first one to get calm. But the calmness was so opposite of his singing, because the singing was so dramatic.” Franklin is still in awe of how many careers Jolson informed, remarking that Dean Martin even mentioned that Jolson’s chumminess with his audiences was uncanny.

“The funny thing about Jolson and all of his Broadway shows was that about 10 minutes into the show he would ask the audience, ‘Do you want me to sing or do you want to go on with the plot?’” remembers Franklin. “They would say, ‘No, Al. Send the cast home.’ And he did! He would sing for two hours. No entertainer in the history of Broadway theater could captivate the audience for two hours just singing by himself. He was just incredible.” When Jolson performed at Radio City Music Hall fans would be wrapped around Rockefeller Center hoping for a chance to score tickets.