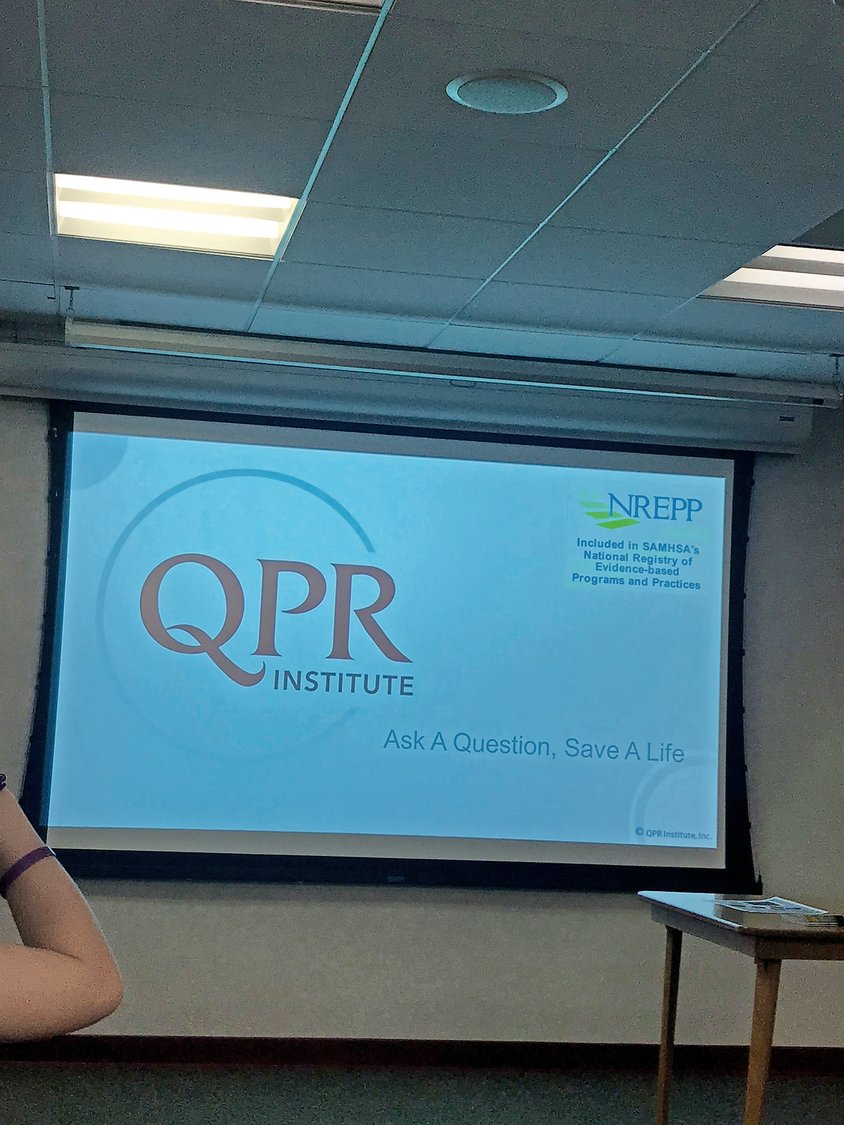 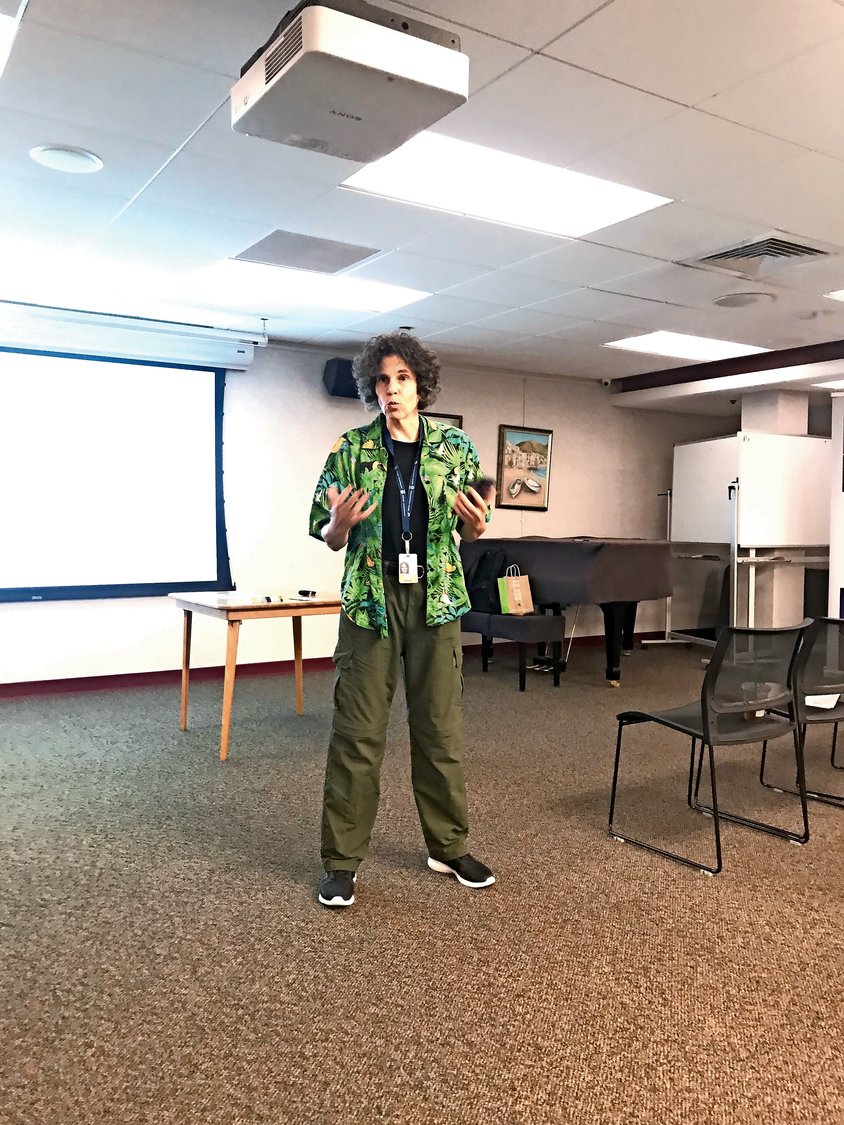 Barbara Tedesco, a QPR instructor, spoke about suicide prevention at the library on June 3.
Courtesy Ruthanne McCormack
Previous Next
Resources

Those in need of support or who want to learn more about suicide prevention can visit these sites:

About 20 Rockville Centre teenagers and adults expressed a shared sentiment last week: Suicide must be discussed.

Their conversations began at a QPR Institute suicide-prevention program, presented by QPR instructor Barbara Tedesco, at the Rockville Centre Public Library on June 3.

The QPR Institute is an organization that focuses on the “question, persuade, refer” method of suicide prevention. Dr. Paul Quinnett, the institute’s founder, published this mental health strategy in 1995. It is not meant to treat or counsel, but to “offer hope through positive action,” he wrote on the institute’s website.

The program was organized after a 2018 graduate of South Side High School and a sophomore at the school died by suicide, in January and March, respectively. It was free and open to the public, and school district officials were notified about it, said Ruthanne McCormack, project coordinator of the Rockville Centre Coalition for Youth, which partnered with the library and the RVC Youth Council to present it.

“I expected a larger turnout,” McCormack said. “But we had at least 20 people, which was fine. The attendees are now trained to recognize signs of someone at risk for suicide.”

When the at-tendees expressed disappointment about the low turnout, Tedesco strayed from her presentation slides and integrated their concerns into her talk. “Parents are in denial,” she told the group. “Because of the myths, they’re so afraid. This is an important discussion.”

Tedesco spoke about suicide myths that could cause friends and family members to shy away from the subject. One, she said, is that “by talking about suicide, you will encourage it.

“Most people have mixed emotions up until the very end, and need to talk about it,” she explained. “Asking someone about suicide lowers anxiety, opens up conversation and lowers the risk of an impulsive act.”

“We all need to be comfortable talking about suicide,” McCormack agreed, “and if you suspect someone is at risk, you must ask the question: ‘Are you thinking about suicide?’ and get them help.”

Though there’s no “guaranteed formula,” to prevent suicide, Tedesco said, talking about it could reduce the number of suicides. “It’s not just about asking, ‘Are you OK?’” she explained, “but being persistent and showing empathy. There’s a lot of fear involved. There’s denial, and it’s scary to ask somebody [for fear that] they say yes, and then what do you do?”

Then comes the persuading and referring part of the conversation. Tedesco suggested saying, “So, I get you’re upset. Could you tell me more about that? Will you stay alive until I see you tomorrow? I want to try and help you.” She also suggested involving other people the person trusts, such as a sibling, rabbi or mentor, and taking the person for a professional assessment.

“Everyone has a right to know the steps and precautions,” said attendee Kim McGuigan, whose daughter Jamison Novello died by suicide in March. The schools “have to make that available.”

Dr. Noreen Leahy, the school district’s assistant superintendent of pupil personnel services and special education, did not attend the program, but noted that there are many other mental health initiatives and trainings available that the district is developing. “It’s wonderful that we have so many organizations working for this in the community,” she said.

Leahy said that although the district does not plan to bring the QPR presentation to the schools, it is working on mental health initiatives. Starting next school year, for example, the district will bring in Sources of Strength, a program for students aimed at preventing teen suicide, and Suicide Safety for Teachers.

“We will address suicide prevention in the context of our mental health initiatives and in a way that is developmentally appropriate,” Leahy said.

The district has been working closely with Debra Caputo, a mental health, suicide prevention, intervention and post-intervention specialist, to review the school’s current plans, Leahy noted. By working with outside professionals, the district will “try to connect the dots of how we can get help for our students that need more serious mental health interventions,” she said.

Caputo noted that the school district has brought in the More Than Sad program to help students identify a mental health problem and learn how to seek help, as well as Lifeline Postvention training for school officials, an evidence-based program to help with the aftermath of traumatic deaths and identify students at risk.

“Research has proven that when these evidence-based programs take place, there are positive outcomes for parents, students, the school and community,” Caputo said.

She noted that there is “a whole philosophy” behind schools teaching suicide prevention, which involves making sure that parents and educators are the first ones trained and then bringing that information to students, and in the meantime, giving children a better understanding of their mental health.

“People don’t recognize some of these things as suicide prevention,” she said. “A lot of prevention programs don’t have the word ‘suicide’ in them — it’s self-esteem, it’s empathy, it’s all of that.”

The district currently has nine school psychologists, seven social workers and eight guidance counselors, as well as a supervisor of counseling and student support services at the high school. The district is also set to add a guidance counselor for the 2019-20 school year, after Board of Education members called on the district to provide an extra resource for elementary school students.

At the May 14 Board of Education meeting, Deputy Mayor Kathy Baxley noted that in a recent informal survey of 17 high school students, all said they would go to a teacher or friend first if they were in a mental health crisis. All but one student knew who the health care professionals were at South Side. Baxley suggested posting social workers’ photos and contact information around the schools.

“Make them familiar, make them accessible and have them smile in the pictures,” Baxley said. “Having a photo with the contact info and face of a social worker might encourage a child to reach out.”

Leahy said that the district was working with organizations such as the Long Island Crisis Center and Long Island Behavioral Health to establish training programs for students and other initiatives that get everyone involved and educated about the signs of students in distress or at risk of suicide, as well as learning about mental health in general.

In addition, the newly formed Mental Health Task Force will bring community members together to “review the progress of the current programs and instruction, discuss new programs and come up with ideas,” Leahy said.

“The task force will organize and frame all efforts so people will be better informed,” she added, “and we’ll throw the net out and make sure everyone knows about these initiatives and events.”

The task force got off to a “great start” at its first meeting on June 6, Leahy said. Similar to the district’s Drugs and Alcohol Task Force, it comprises about 30 members — parents, teachers, students, administrators, counseling professionals, village officials and school board members. At the first meeting, the task force divided into several subcommittees to tackle the issues, including collecting data about suicide, educating teachers and parents, holding presentations in schools and working with community organizations.

“We’re really working hard,” Leahy said. “We want to set up a series of ongoing interventions and educate people to think about mental health the same way we think about physical health.”