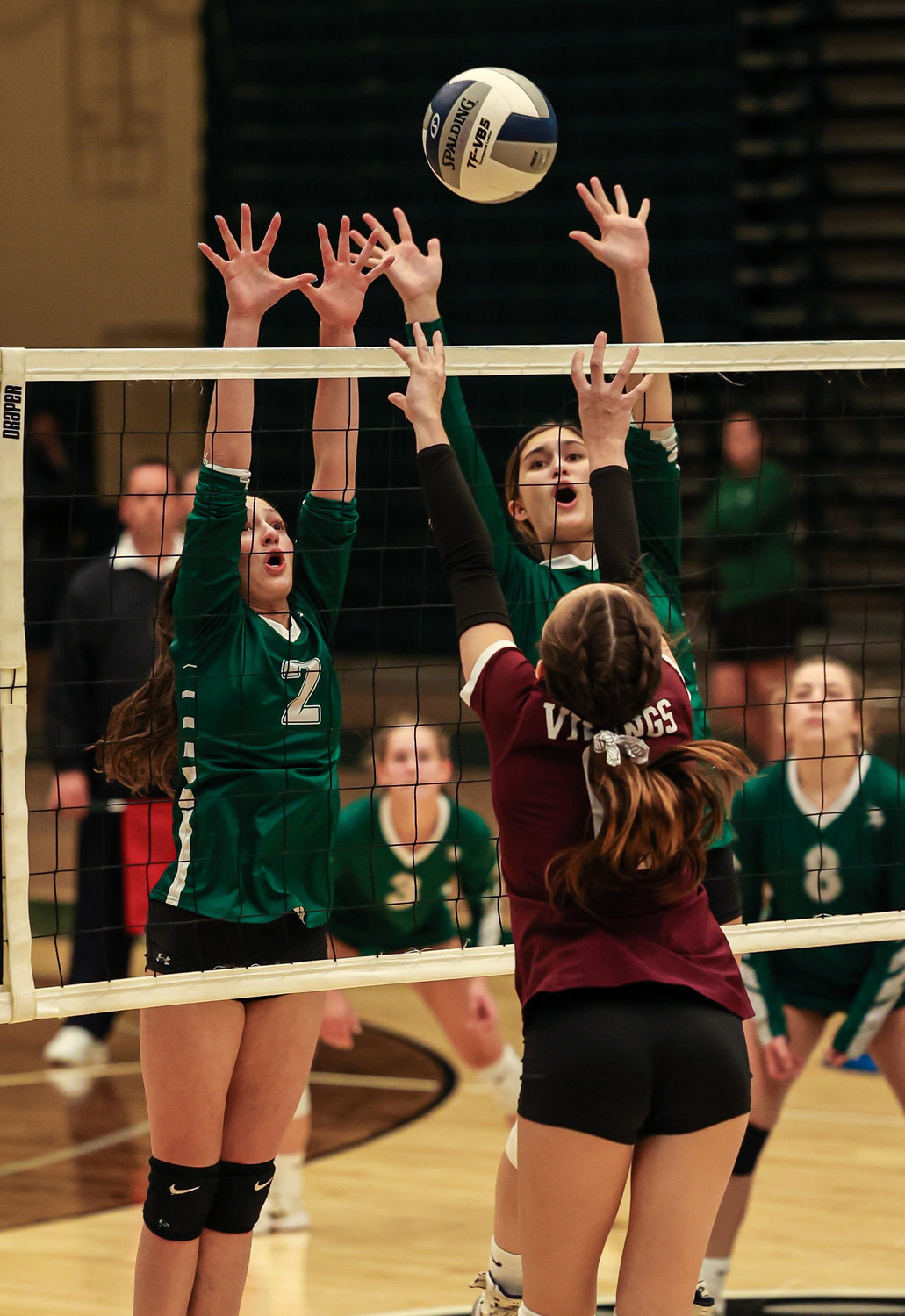 Seaford’s Marinna Dupkin, left, and Sarah Lochner teamed for defense at the net during the Nassau Class B title match.
Karen Millindorf/Herald
By Andrew Coen

The Seaford girls’ volleyball team achieved its goal of a repeat county title and established a dynasty in the process.

The Vikings once again hoisted the championship plaque after a four-set win against third-seeded North Shore in the Nassau Class B finals Nov. 9 at Farmingdale State College. It marked Seaford’s third county title in four seasons.

“Winning counties two years in a row was so rewarding and such an accomplishment for our team,” said senior libero Danielle McHugh, who had 11 digs in Seaford’s county championship victory by set scores of 25-18, 25-11, 17-25 and 25-17. “We have been working so hard for this win throughout the season and our team has created such a strong bond, which allowed us to work so well together making us capable of achieving this goal.”

Seaford (12-5) made more history two days later earning the program’s first Long Island championship since 2019 and trip to the state tournament with a dramatic five-set win against Bayport-Blue Point at Hauppauge High School on Veterans Day. Sophomore outside hitter Carey-Jean Block led the way with 34 kills and 34 digs in a 24-26, 25-22, 25-17, 19-25, 17-15 triumph.

The Vikings were down to match point in the deciding set trailing 15-14 before seizing control with three straight points culminating with a Block kill. The team, which included eight seniors, was extra fueled after falling to John Glenn in last year’s Long Island finals in four sets.

“I couldn't believe how hard they dug in,” said longtime Seaford coach Marie Savage. “I was really proud of them.”

In the county finals, Seaford won the first two sets before North Shore stayed alive with a 25-17 win in the third game. North Shore, which was led by seniors Abby Maler and Laini Silverstein, hung tough in the fourth set tying the score at 15-15 before Seaford took command with 10 of the next 12 points.

North Shore had advanced to the county championship stage with a sweep of second-seeded Wheatley in the semis, 25-20, 25-21 and 25-15.

“The girls gave 110 percent of what they had and I couldn't be prouder of them,” North Shore coach Tracy Iacovelli said. “Seaford is a very good program with lots of history and hopefully North Shore can start creating and building its own.”

Seaford will continue its season this Saturday in the state semifinals on Saturday at Cool Insuring Arena in Glens Falls with a match against western New York’s Wayne High School. Also In Seaford’s bracket for the pool-play tournament is Hendrick Hudson and Westhill.

However far Seaford goes this weekend, the memories of winning a Long Island title to earn that trip upstate will resonate for a long time.

“We all wanted this so bad,” McHugh said. “This is something I will never forget.”