Seaford nips South Side in thriller 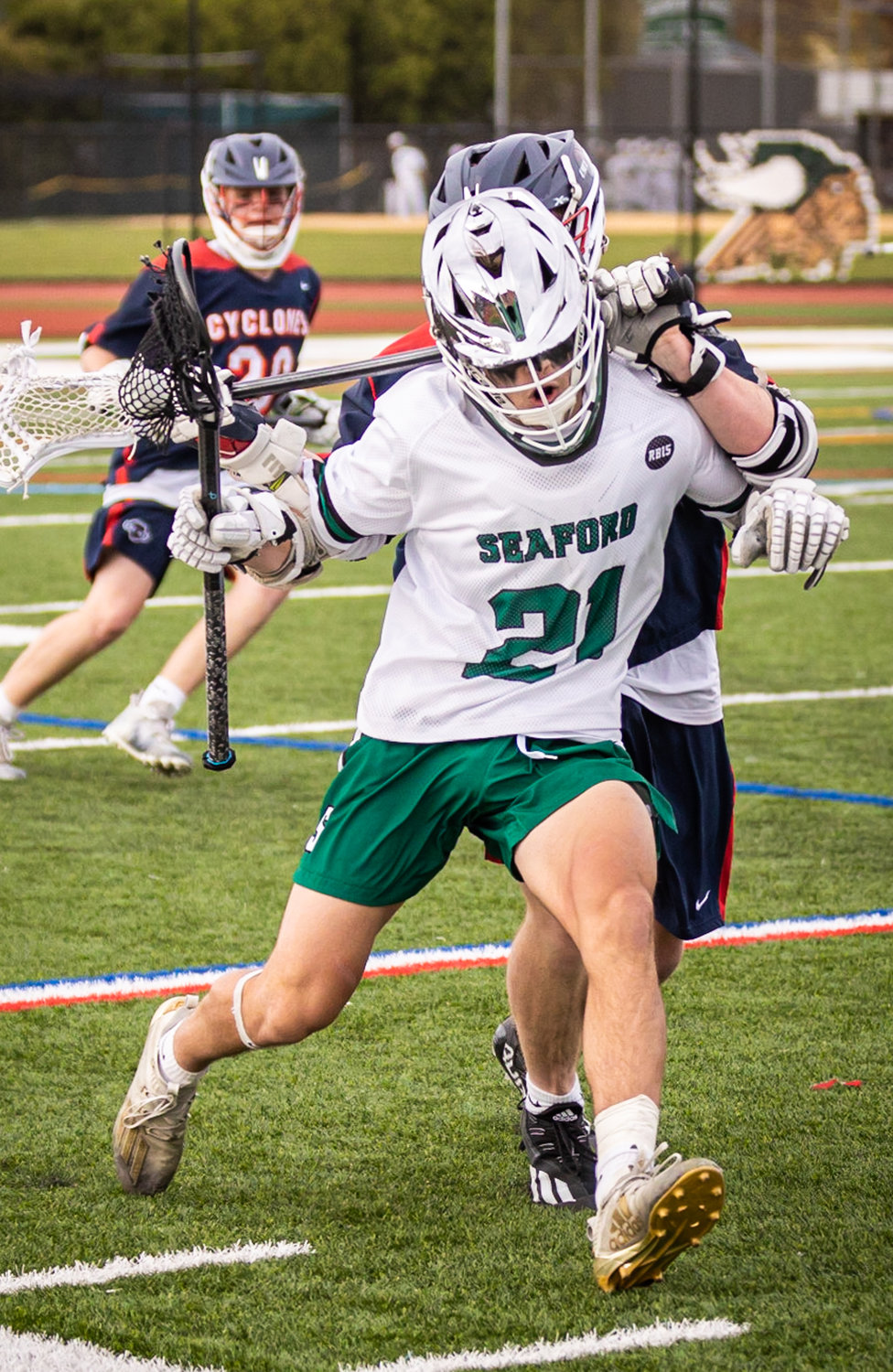 Senior John Raucci scored twice, including a highlight-reel goal late in the fourth quarter, in Seaford’s 7-5 win over South Side May 10.
Karen Millindorf/Herald 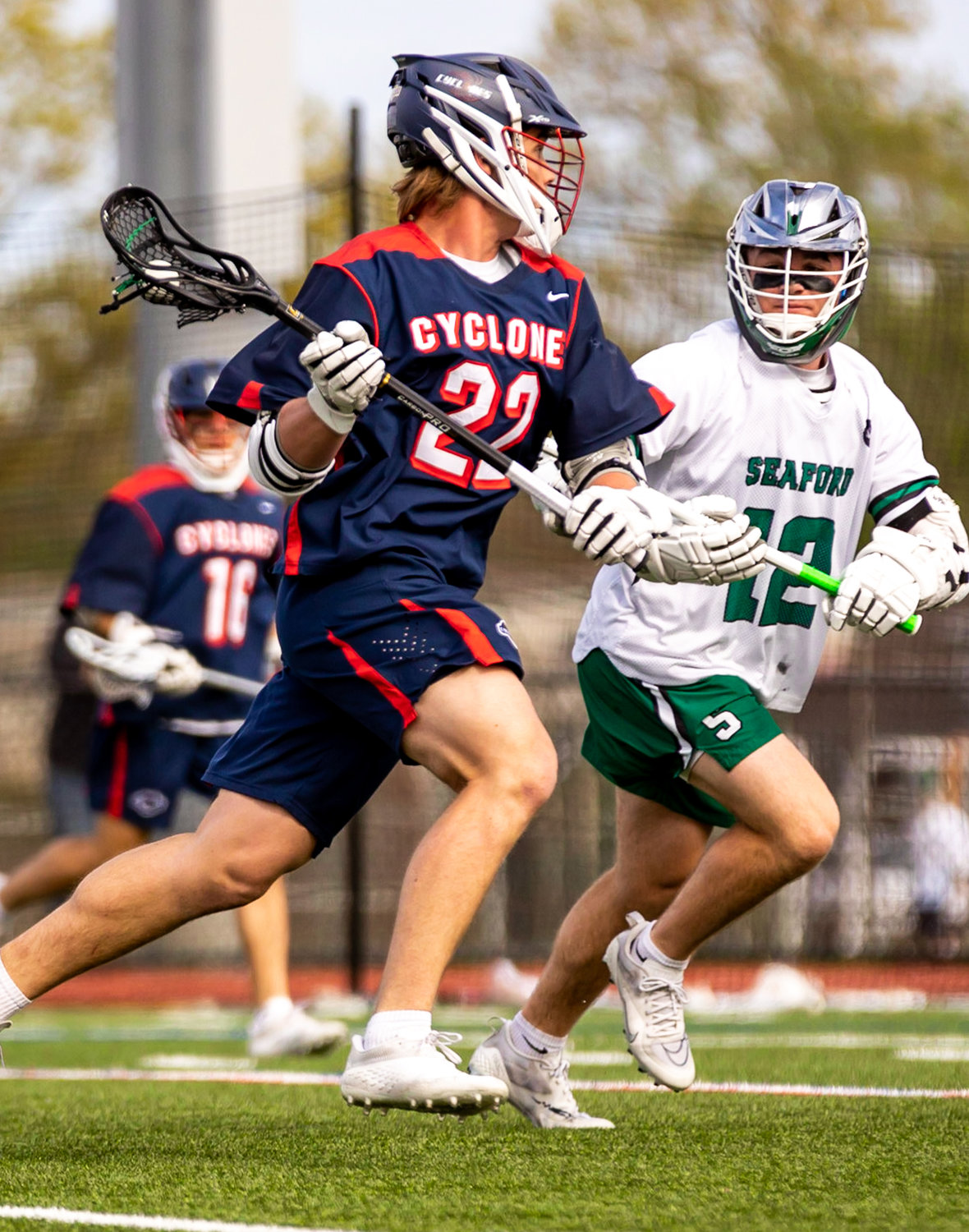 Despite a hat trick and an assist from senior Brady West, the Cyclones dropped an intense 7-5 matchup at Seaford on May 10.
Karen Millindorf/Herald
Previous Next
By Tony Bellissimo

May 10 was Senior Day for Seaford boys’ lacrosse and that meant a busy postgame ceremony with 20 Vikings on the roster set to graduate in June.

But first they wanted to continue to make a case for being one of Nassau Class C’s championship contenders, and seniors AJ Barone, Antony Munro and John Raucci helped them do just that.

Raucci’s dynamic no-look, behind-the-legs goal off a feed from Barone with 3:48 remaining in the fourth quarter put Seaford ahead for good in an intense 7-5 victory over South Side. Munro completed a hat trick as time expired for the final margin in what was Seaford’s 12th win in 13 games. Senior Brady West had a hat trick an assist for the Cyclones, who slipped to 8-4.

“A lot of our guys have played lacrosse together for 10 years,” Seaford coach Brian Horner said. “We went to the semifinals last season and these guys have more to prove. They want to show we can be one of the big dogs.”

Neither team led by more than two goals and Seaford trailed just once all afternoon. Junior Jack Mayerhofer made it 5-4 South Side just 48 seconds into the fourth quarter but the visitors couldn’t get anything past Vikings senior goalie Joseph Ulzheimer thereafter.

“We knew it was going to be a tough game and we didn’t execute on offense like we’re capable of,” South Side coach Steve DiPietro said. “Both teams played really hard. Seaford is very talented and we didn’t rise up to the challenge today.”

On the eventual winning goal, Raucci said he knew he was in the vicinity of the cage when he took Barone’s pass off his shoestrings and in one swooping motion flicked it past South Side goaltender Tommy Gentile, who made three extraordinary saves in the third quarter to keep the game tight as sophomore teammate Cole DiPietro had the only goal of the quarter.

“I was cutting across the middle and my head was down after I caught the pass, so I just whipped it behind me and hoped for the best,” said Raucci, who has 34 goals this spring. “It was pretty wild that it went in.”

“Our defense does a lot more than defend,” Horner said. “Those guys are an important part of our transition.”

The Vikings led 4-3 at halftime, thanks to two goals from Munro and one each from Raucci and senior Thomas Kofod. Barone, who had three assists and leads the team with 59 points, answered Mayerhofer’s goal with 9:48 remaining to make it 5-5.

“I think there’s a good chance we’ll see Seaford again in the playoffs,” DiPietro said. “We still have a few games to go, but they could end up seeded second and we could be third.”

The Nassau Class C playoffs begin this Friday and conclude with the county title game June 1 at Hofstra.