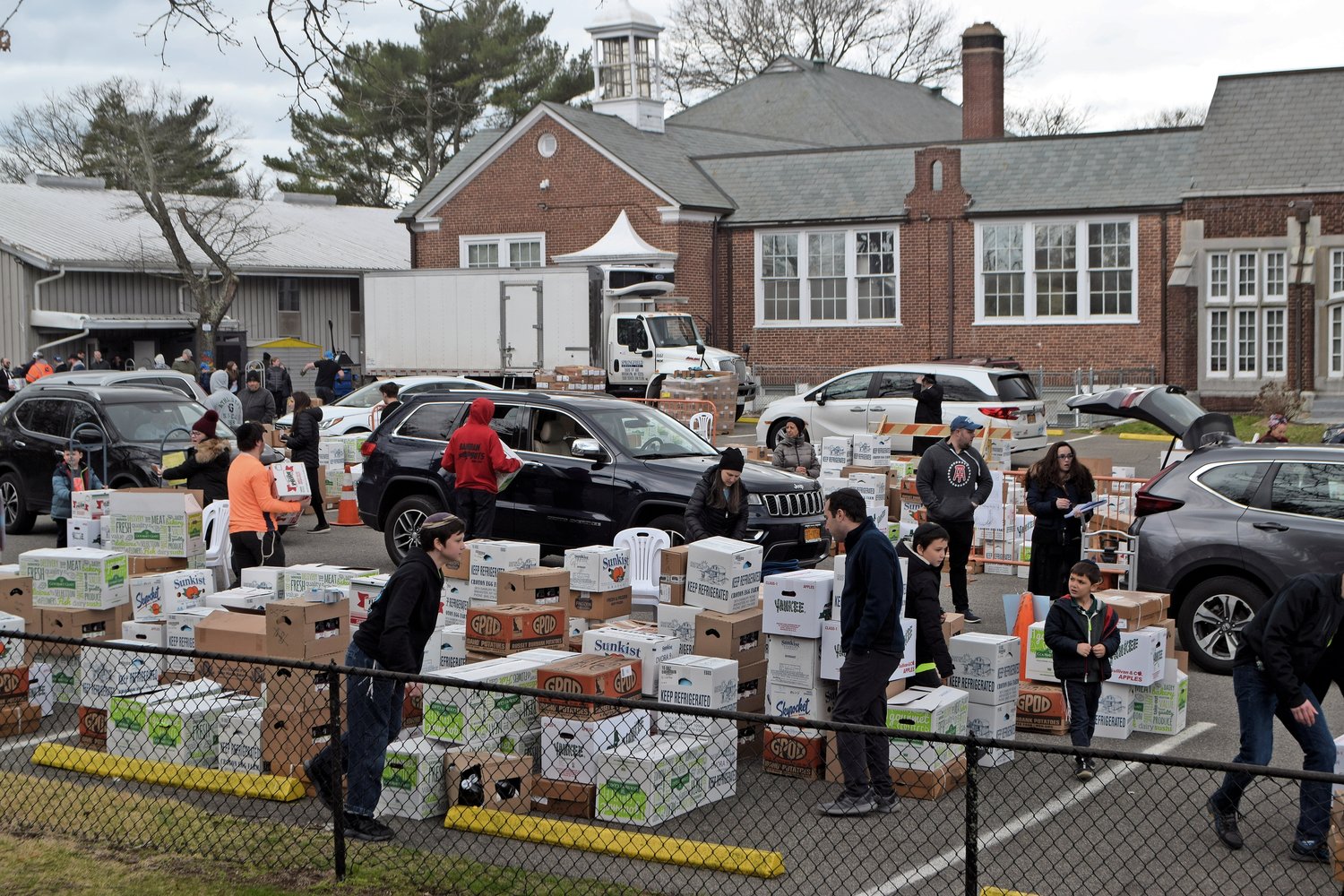 From the staging area to the vehicles lined up for the food orders, the SKA campus was a beehive of activity last Sunday.
Jeffrey Bessen/Herald 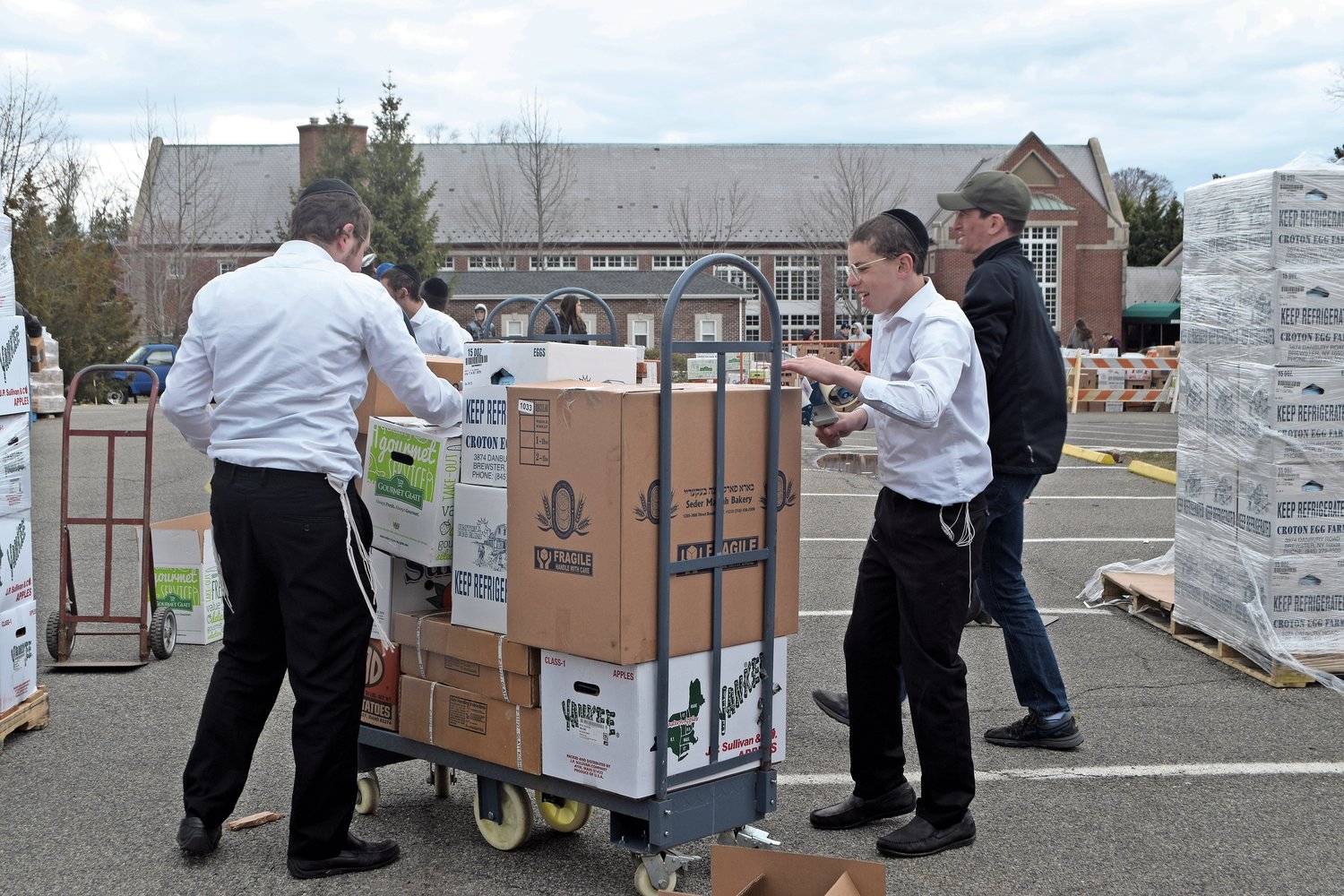 More than 50 volunteers filled over 375 alphabetized food orders and placed them in a makeshift staging area in the parking of the Stella K. Abraham High School for Girls campus in Hewlett Bay Park last Sunday.

The Passover meals, for people in need across western Long Island, from Merrick to the Five Towns and even Brooklyn, Queens and Great Neck, were packed in boxes and readied for pickup as vehicles began rolling in at around 1 p.m.

The effort was sponsored by the Hewlett-based Leon Mayer Fund and its Mark Ramer Chesed Center, in association with Kosher Response.

“This has been in planning for months already,” said Gabriel Boxer, of Hewlett, who heads Kosher Response, a charitable program he created at the beginning of the coronavirus pandemic in 2020, “and if you’re aware of what’s going on in the market today, [it’s difficult] for us just to be able to get chicken, because there’s a chicken shortage in the supply chain.”

Roughly 125 fully cooked meals, Boxer said, were to be distributed on Thursday to families who have relatives in the hospital, have lost loved ones or are in similar circumstances.

Boxer, the Republican candidate for State Senate in the 10th District, where he is challenging incumbent Democratic Sen. James Sanders Jr., also works with the Leon Mayer Fund and helps to run the Chesed Center. The fund, overseen by Rabbi Simcha Lefkowitz, was founded 37 year ago after Mayer’s death by one of his sons, Shlomo, and Lefkowitz.

From inside the SKA gym, where volunteers were working, to the pallets of food where the orders were put together, the site was a beehive of activity last Friday and again two days later. The orders, depending on families’ requests, included chicken, meat or fish, potatoes, gefilte fish, matzo, apples, oranges, and apple and grape juice.

“It’s tremendous,” Lawrence resident Barry “Buzz” Mayer said of all the activity — boxes being packed and taped closed and shuttled on carts to the staging area. Another of Leon Mayer’s children, Barry, described the fund as a “local organization that is supported through all our community.”

“Our goal is to help anybody who needs help,” Barry said as he stood with his son, Leon, who was named after his grandfather. “All of our relatives come, and everyone comes to just hold on to and carry on a tradition of helping.”

Leon Mayer, who has three children, has even gotten his 5-year-old son Charlie involved. “Everybody gets a smile when they see him coming around and doing the work,” Leon said, “and it’s just really a special thing to be able to be a part of it year in and year out.”

The volunteers came from many of the same communities where the food was going, and included students from the Brandeis School, in Lawrence; Davis Renov Stahler Yeshiva High School for Boys, in Woodmere; the Hebrew Academy of the Five Towns and Rockaway, in Cedarhurst and Lawrence; SKA; Yeshivas of South Shore, in Hewlett; the Hebrew Academy of Nassau County, in Plainview, and Boy Scout Troop 13, from West Hempstead.

“So it’s a big mitzvah” — good deed — “and it’s helping so many people,” said Cedarhurst resident Simon Mandelbaum, a HAFTR High freshman who helped assemble the orders and organize them, explaining that he has volunteered for the past few years. “I enjoy doing it, and I’m thinking about how I’m helping so many people, and it’s just a good thing we’re doing.”

For more on the Leon Mayer Fund, go to LeonMayerFund.org.
For information on Kosher Response, go to KosherResponse.com.