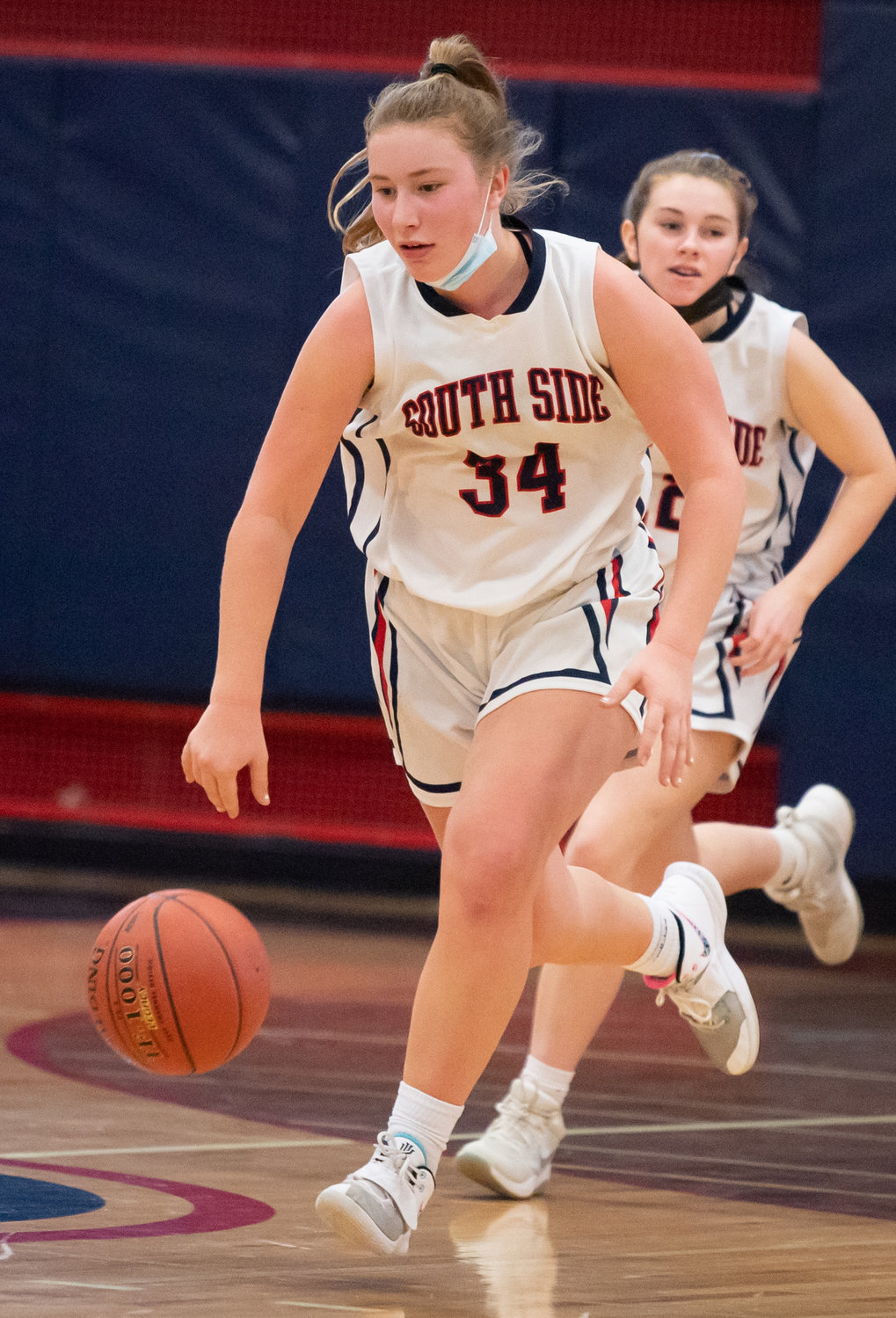 Kyla Murphy scored 10 points last Friday evening to help the Cyclones get back on the winning track with a 54-24 victory over Valley Stream North.
Media Origin Inc./Herald
By Brian Kacharaba

The South Side girls’ basketball team is back on track for a postseason push after winning twice in less than 24 hours.
The Cyclones entered last weekend in a slump with three losses in their previous four games but got off to quick starts in both Friday night’s 54-24 win at Valley Stream North and Saturday afternoon’s 60-30 home victory over Kennedy, which was made up from Dec. 21. South Side improved to 8-3 and, more importantly, 3-3 in the conference.
Against VSN, South Side scored the first 15 points of the game and the first eight of the second quarter to cruise to a 23-8 halftime lead en route to a comfortable win. Nine different Cyclones had points in the game, led by senior Bridget Basile’s 14 and sophomore Kyla Murphy’s 11.
The next afternoon, South Side raced out to an early 18-1 lead and outscored the Cougars 23-11 in the second half to complete the weekend sweep. Murphy, despite playing out of position, had a breakout game with a season-high 18 points and Basile added 15.
An 8-3 record looks impressive on the surface, but South Side’s record against winning teams this season is 1-3. The Cyclones held on for a 52-48 win at Plainedge in a non-Conference A-3 contest on Dec. 2, but head coach Dan Ferrick said “poor shooting” contributed to losses against conference leaders Division, Hewlett and Manhasset in almost a month span to put them in a tailspin.


“I don’t think we’ve even hit our stride,” Ferrick said. “I don’t even think we were playing that great in the beginning. I think we caught a few teams that were a little down. [Against] Plainedge, we won by four, but the game wasn’t really that close. That was a game we played very well.”
Like most teams, Covid and injuries have been factors for the Cyclones this season. They’ll be without senior Amanda Waiters, who was averaging almost eight points per game, the rest of the way. Forward Ava Doreste missed over a month, Mia Delmond, one of team’s top defenders, is currently out of the lineup and All-County guard Maggie Long tried valiantly to come back from last spring’s ACL tear but is back on the sideline indefinitely.
Ferrick had to call up some players from the JV last weekend to supplement the roster.
Basile is again the team’s leading scorer at just over 13 points a game and has reached double digits eight times, including a season-best 23 against Freeport on Dec. 9.
“She’s doing fine,” Ferrick said. “She’s put a lot of pressure on herself. From freshman year until now, she’s one of the most improved players I’ve ever coached.”
Ferrick is hoping that Doreste, who scored 22 points against Hewlett, will be a consistent scorer in the final weeks of the season and lists Charlotte Rathjen, Ava Kelly, Dakota Evans, Taylor Hansman and Katherine Ahern as other key players to watch down the stretch.

South Side cruises into semifinals